Many years ago I had a lovely friend called Megan who was on a ‘spiritual quest’ for want of a better description. Megan believed in angels and all things esoteric; me not so much. But because Megan so truly believed in the power of these ‘magical’ things, (and I wanted to get her off my back), I eventually agreed to join her at a crystal healing workshop one weekend.
Sceptical by nature, I went, fully intending to have a bit of a laugh. By the end of the weekend I had a bowl-full of different crystals, all carefully selected for different purposes.

Wikipedia describes crystals or crystalline solids as ‘a solid material whose constituent atoms, molecules, or ions are arranged in an ordered pattern extending in all three spatial dimensions.’

The most common crystals that we know from everyday life are salt and diamonds. Snowflakes are also actually crystals, as their shape is a perfectly ordered pattern.

How does it work?

You’ve seen those little sachets of ‘stuff’ you get when you buy a bunch of flowers from the florist. What that ‘stuff’ is, is ground crystal. Did you know that? Putting certain crystals in plant pots or flower beds has been known to revive plants or make them grow. So what can it do for the human body?

Crystal healing is known as a pseudoscience or alternative medical practice. According to crystal healers, the energy of certain crystals works with certain chakras on our bodies. Chakras are centres of life force, also known as prana, on our bodies. Each chakra is said to have a colour that is related to it, and so crystals of a certain colour are used that correspond to that chakra’s colour.
Crystals are said to carry their own individual vibrations, which resonate with certain chakras, and promote healing.
Crystal healers claim that crystals can be used for emotional as well as physical healing.
Like all alternative healing practises, crystals are about bringing the body into balance.

Crystals can be placed on certain parts of the body (corresponding to an ‘energy grid’), held in the hands, or placed at the feet of a patient.
When crystals are placed at the feet, they are being used to ‘ground’ that person.

Which crystals to use for fertility

So many crystals exist, each with a supposed use, that to create a full list would be futile here. So I’ll stick to the ones that are best known for their healing properties in the fertility world.

Orbicular Agate. (A very specific type of Agate – there are several kinds, each with their own properties). It is used for treating reproductive disorders and to increase fertility.

Basalt. Used in the treatment of the reproductive system, and to enhance fertility.

Green Calcite. This stone is used to clear toxins (physical and mental toxins) from the body, to allow the body to be more receptive to conception.

Chrysoprase (or Chrysophrase). Stimulates fertility. It is also used for ‘hope’ and ‘compassion’ which is also useful when trying to conceive.

Moonstone. A favourite when it comes to fertility treatments with crystals, Moonstone is said to enhance fertility and to ease pregnancy and childbirth. This would be a good stone to carry with you during your pregnancy.

Rose Quartz. Another very popular crystal (also known as the heart stone and that of unconditional love), this stone is used to stimulate fertility as well.

Rhodonite. Used to infuse the body with a sense of love and well-being, as well as enhancing fertility.

Tigers Eye. Used for treating disorders of the reproductive system and for enhancing fertility.

Crystal healing is, as stated before, a pseudoscience. It has no basis in scientific evidence, and is slated by many as a placebo. For many thousands of people though, wearing, or using, crystals gives them a feeling of power over their destiny. Is this more a psychological affect than anything else? It may well be, but many people still swear by their powers.

When I attended that crystal workshop many years ago, I cannot say for sure that they had any effect on me. While we passed the various stones around the room, feeling their weight and rubbing their surfaces, I remember one woman actually throwing a crystal out of her hands, so strong was her reaction to it. Was this all psychological? Did she feel a ‘buzz’ or a ‘vibration’ from a certain stone, or did she think she had because we were supposed to? To this day, I am still not certain.

I didn’t feel any specific energy or vibration myself, but then again, I am a sceptic and always will be. It didn’t stop me from being open to the possibilities of crystals though, which is why I landed up buying a few. I still have those crystals to this day, nine years later.
For that reason, when it came to trying to conceive naturally at the age of 41, I decided to invest in a few more. Because one never knows, and one has nothing to lose; right?

So, I’m not saying they do work, but I’m also not totally saying that they don’t. You be the judge.

Tigers Eye and other crystals are available from Amazon online 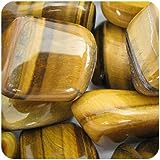 Read The Crystal Bible for all your crystal needs

For further reading on natural fertility please see my other articles