Differences Between Aspirin vs Tylenol vs Advil 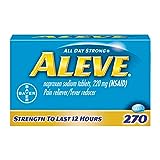 Traditionally I have been one of those people who doesn’t use pain relievers (or any other medications for that matter) all too often. On the rare occasion that I would get a headache or cramps or something else that required me to get some pain relief in the form of the pill, I would usually just take whatever was around. As far as I was concerned, Aspirin and Tylenol and Advil were all basically the same thing – drugs that were designed to relieve my pain.

Only recently did I start to realize that there are some major differences between these three common pain relief products. Although they do all essentially serve the purpose of relieving pain, they do so in different ways. This means that some types of pain are better served by one drug than the other. It also means that there are different side effects with each of these pain relievers. Depending on your condition, this could make it safe to take one of these pills and not the others.

As I’ve started to realize that all of these pain relief pills aren’t just the same, I’ve started to get more concerned about which ones I put into my body on those days when I actually do need to take a pill to get some relief. I’ve decided that it’s important to learn as much about them as I can so that I’m really taking the pills that are right for me when I need to do some over-the-counter pain relief. Here’s a bit of the information that I’ve uncovered about each of these drugs which may help you to figure out which one is the right one for any pain that you may be experiencing:

Aspirin is a pain-relief drug that is able to do several things other than relieve pain. First of all, it is an anti-inflammatory which means that it reduces swelling and inflammation in the body. This helps to cause reduction of pain when the pain is due to inflammation. Additionally, aspirin is an anti-clotting drug which means that it’s good for people who are at high risk of heart problems related to blood clotting but could be dangerous for people who already have thin blood.

Aspirin is generally considered to be the best pain relief drug for people who need to reduce their fever and get rid of aches and pains in the body particularly those that are due to inflammation. However it is considered to be the pain relief drug with some of the highest risks for long-term use (risks including stomach ulcers). At the same time, it is considered a good long-term drug for people who are trying to lower their risk of heart problems. So Aspirin is a powerful over the counter pain relief pill that may be great for some people and bad for others.

Main benefits of aspirin:
• Relief of minor aches and pains

• Bleeding in the stomach

Tylenol is a brand name that people commonly refer to when they are talking about pain relievers with the main ingredient of acetaminophen. Tylenol is generally considered to be a good pain relief option for people who have muscles aches and pain but is primarily designed for people who want to get pain relief for headaches. The drug is considered to have very few side effects. However, long-term use of Tylenol or use of Tylenol while drinking alcohol can be high-risk for side effects and may even be fatal.

• Negative interactions when taken with alcohol

Advil is a common name brand for the drug that is based on ibuprofen. This drug is also good for relief of body pain and fever. However, it is milder than the other two drugs. This is good for people who are looking for a low risk of side effects but bad for people who are suffering from serious pain since the positive effects of Advil don’t last as long as those of Aspirin or Tylenol. The one thing that Advil seems much better at treating than the other two drugs are is the reduction of pain associated with menstrual cramps.

Main negative side effects of Advil:
• Nausea and dizziness

Summary of Differences between Aspirin, Tylenol and Advil

Basically what you’ll find is that there are a lot of similarities between these three drugs but that there are also enough differences that you should choose wisely when picking a pain pill. They are all used to relieve pain and can serve the purpose of reducing fever and diminishing joint and muscle pain. They all have limited side effects which usually aren’t experienced unless there is an overdose of the drug over an extended period of time. However, these side effects vary and may impact people differently. Someone with an alcohol problem may want to avoid Tylenol whereas someone with thin blood would avoid Aspirin. It is always best to consult a doctor to determine which drugs are right for you even when you are getting them over the counter.

Which Pain Relief Pill Do You Prefer?