Eating disorders are complex mental illnesses, surrounded by a large number of myths and misunderstandings. Even after years of struggle and several hospitalizations, I myself still didn't feel like I had a good grasp on why eating disorders have become so popular, why I myself developed one, what I could do to heal myself.

Upon my release from eating disorder rehab, I made it my mission to read all I could about eating disorders, their history, their causes, and their treatment. There are many books on the subject: dozens of true-life narratives, hundreds of workbooks, thousands of essays. These are my favorites, those that provided the most insight for me, and provide a cross-section of the types of literature available on the subject today.

Wasted has sometimes been called the "Anorexic Bible" in pro-ana circles. It is the true-life narrative of author Marya Hornbacher's struggles with anorexia and bulimia, from self-induced vomiting at nine years old to starving herself down to 52 pounds in college. While Hornbacher's case may seem extreme, this book resonates with anyone whose life has been touched by an eating disorder, and offers validation for those who've struggled, and a glimpse into the eating disordered mind for those who haven't.

Note: I would not recommend this book to an eating disordered individual who has not been through treatment, as the contents can be extremely triggering even for those well into recovery.

This is a book that bears reading again and again. I recommend it to every woman I know, whether or not she struggles with food issues. Another story of personal struggle (primarily with anorexia), the autobiographical aspects of this book rather serve as a frame, rather than the driving force behind the text.

Less graphic than Wasted, Appetites concentrates less on the gritty details of life with an eating disorder, and more on the inner needs and desires that prompt us to act out, whether with food, shopping, drinking, relationships, or any other "substance" that can be abused. We all wage internal wars over agency and entitlement, in a world where, for women at least, less is always better than more. Every time I read Appetites, I gain some new insight into my own personal battles, and how I can go about finding peace.

When Food Is Love: Exploring the Relationship Between Eating and Intimacy
Buy Now

"When Food is Love," by Geneen Roth

I don't think it's helpful or healthy to read endless volumes of autobiographical tales of struggle with eating disorders, which is not to say that I haven't done it, but I found that, after a certain point, the practice served to perpetuate my own disorder, rather than help me heal it. The third and final personal narrative I recommend is When Food is Love, by Geneen Roth.

The author spent years battling binge eating and diet addiction, and this book is a look back at how childhood wounds fuel our adult compulsions. A fairly light read, it is nevertheless packed with wisdom on the subjects of food and love, and the relationship (and often substitution) between the two. Even without a history of compulsive overeating, I found myself literally devouring this book over a three-day period, and feeling more satiated when I was through. 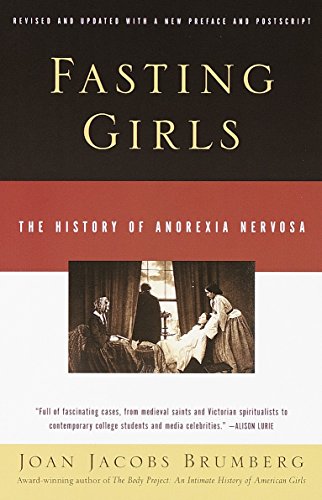 From the author of The Body Project: An Intimate History of American Girls, comes this comprehensive history of anorexia nervosa, from the abstinence from food of early Christian saintes, to the rise of food as a symbol in bourgeois Victorian society, to today's obsession with weight loss. Whether or not anorexia is the disorder that most touches your life, there is merit in reading the series of events (cultural, economic, and historical) that have led up to the modern epidemic of the eating disorder in all its forms. This timeline is well laid out and easy to follow, accompanied with analysis by the author, a social historian and Professor Emerita at Cornell University.

Unbearable Weight is the most dense of the books on this list, but please don't let that discourage you from reading it. A compilation of essays by feminist philosopher Susan Bordo, it examines with an unflinching gaze the cultural constructs that have allowed eating disorders to rise to their present popularity.

The female body is a symbol loaded with (often negative) meaning in today's cultural climate, and Bordo's book attempts to break through centuries of literature, philosophy, and politics to bring us closer to the core of who we are, and how we can more fully exist in a society built on principles meant to pare us down.

Obviously, this list is by no means the be-all and end-all of eating disorder literature. There are dozens more books I would highly recommend to anyone with an ongoing interest in the subject. Of course, there's always more to learn! Consider these books a jumping-off point, if you will. Once you're got your feet wet, I hope you'll dive right in.

Gaining: The Truth About Life After Eating Disorders
Buy Now