Expect Nothing (Get Much in Return)

LEARN TO GIVE WITHOUT EXPECTING ANYTHING BACK

...AND GET REWARDED ANYWAY

“The true measure of a man

is how he treats someone

who can do him

A few years ago, the hottest Christmas item was a Nintendo Wii. Every kid wanted one. But they were impossible to get. People (parents mostly) lined up at stores, even camped out overnight, in hopes of landing one.

I was one of those parents.

My son wanted a Wii in the worst way. I exhausted every avenue I could think of, and went to every store I knew of, trying to get one for him. I never camped out, but I waited in lines for longer than I'd like to admit. I got up early, I went late. But everywhere I tried, there weren't enough Wii's to cover all the people waiting. I came up empty-handed every time. One week before Christmas, I made one last attempt at a toy store. I'd heard they'd gotten a truckload of Wii's so I raced there as fast as I could. The line was out the door. As I approached the line, someone let me know I was too late - - -the store had handed out tickets already; all the Wii's were spoken for. I accepted defeat and went inside the store. I noticed the manager doing a fine and professional job, organizing the crowd, ushering people through the registers, and making sure that the lucky ones with Wii's got to their cars safely. I was very impressed with the manager--- it was close to Christmas, nerves were frazzled and people were on edge, but he had it all under control.

A few days later I returned to the same store to buy some wrapping paper. I happened to see that manager again. He was looking a little worn down. "You did a great job the other day with the Wii's," I said to him. "That was a pretty crazy scene and you handled it really well."

Well, judging by his face, you would think I just handed handed him a million dollars. He completely lit up. "Wow, thanks!" he answered, his smile wide and bright. "But I wouldn't announce too loud that you got a Wii, people are crazy right now." He laughed.

"Oh, I didn't get a Wii," I explained, "I tried, but struck out. But I was just really impressed with the way you managed everything. I even went home and told my husband about it. I know that had to be stressful, and you did a great job."

At that, he looked utterly stunned. "You mean you didn't get a Wii, but you're still taking the time to tell me I did a good job?" He sounded baffled.

"Yeah," I replied, smiling. "I just thought you should hear it."

The manager started looking side to side slowly, then spoke quietly. "You know what, we just had someone return a Wii. The wife got one, not knowing the husband did, too. I wasn't even going to put it on the floor cause it would just be nuts. But if you come over to the register by the video games, it's yours."

Now it was my turn to feel stunned. Just two days before Christmas, after all of that running around and so many failed attempts to find one, I was actually going to get a Wii!. Hallelujah! It was a Christmas miracle!

Really, it was an example of the truest form of giving and how it can return to you tenfold. I was giving without expecting anything in return. Yet I was rewarded greatly anyhow.

Live simply, expect little, give much. Fill your life with love. Scatter sunshine. Forget self, think of others. Do as you would be done by. It's the way to happiness.- H.C. MATTERN

When I took the time to compliment that toy store manager, I was doing so only to be kind. I had no motive or intention. It is at times like that, when I offer a kindness or a favor or some help only for the sake of doing so, that I am often rewarded the most. The rewards may not be instant, but they do come. Case in point: I wrote something nice the other day on another writer's work. I didn't know the writer, but I felt compelled to note a selfless thing he had done. Days later he responded back to me with not only a thanks but also some wise words. Those words led me to the idea for this article. For me, that was such a gift.

See how it works? The writer was selfless in what he did. I noticed that and complimented him, expecting nothing back. Yet he responded, and gave me the gift of an idea for my writing. Neither one of us expected anything for our actions, yet we were each rewarded.

Sometimes the reward is not even from the person you were kind to, but the connection to your kindness is always there. For example, I once hired an exterminator because I saw him being kind to our local little league. I happened to be at the ball field when he was removing a bees' nest and spraying for other bugs. I overheard a coach mention that the exterminator had donated his services. I remembered that, and called him when I needed an exterminator. His kindness and generosity got him the job --- even though that wasn't his intention at all.

It's All About Intention

The Seven Spiritual Laws of Success. We've all heard the saying, "you sow what you reap". Chopra says, "every action generates a force of energy that returns to us in like kind. . . And when we choose actions that bring happiness and success to others, the fruit of our karma is happiness and success." The key is that our actions have to be solely for the happiness and success of others; our intention can not be for our own selfish motives. If our intention is selfish, we will not get rewarded in return, because selfishness will be returned to us!

WHAT IS TRUE GIVING?

True giving is authentic. It is not influenced by what you think you should do, or what you think others think you should do. It needs no audience. It is aligned with your pure intentions of wanting to do something kind, nice or good, for that reason alone. It is effortless and can't be forced or manipulated. It has no uncertainty. If you are conflicted about doing something for someone, it may be because you are actually concerned with a motive or intention beyond simply wanting to give. You may be thinking of what you are expecting in return. True giving has no such conflict. It brings joy and contentment simply from the act of giving itself. It is its own reward!

PUTTING IT INTO PRACTICE

Practice kindness and generosity in your actions, solely for the sake of doing so. Give for the joy of giving, with no expectation of a gift in return. Give a compliment because you mean it and not because you expect to hear one back. Invite friends to dinner, even if they don't have the means to reciprocate. Donate your extra clothes, just because you know someone can use them, even though you may never hear a thanks. Do a good job because others will benefit, even if you won't get the credit. Choose to do the right thing, even if no one ever sees you do it.

Look for opportunities of true giving-- opportunities when you can give something away, whether in the form of a kind word, a helping hand, some talent or some time, just because your heart is telling you to do so. When the cause is solely for the happiness and success of others, the effect will be the same for you. Just as long as you don't expect it, it really is amazing what will be returned to you.

Expect Nothing, And Get Much in Return

Giving Heart: Unlocking the Transformative Power of Generosity in Your Life
Buy Now 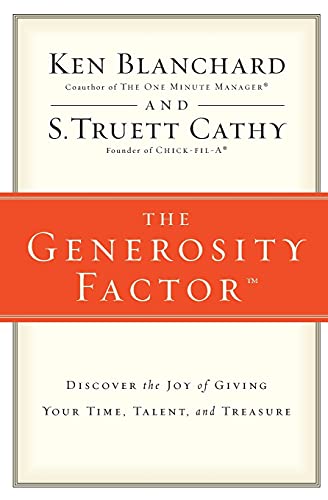 The Generosity Factor: Discover the Joy of Giving Your Time, Talent, and Treasure
Buy Now

Another Hub About Selfless Giving