How to Measure Basal Body Temperature

- If necessary, use an alarm clock. Waking up and measuring your BBT at exactly the same hour each morning is essential. On weekend mornings you can simply measure your temperature and then go back to sleep.

- Each act that you get involved in after waking up will lead to temperature changes. Refrain from chatting and kissing your husband – measure your temperature first.

- If you wake up during the night, three hours or less before the time when you usually wake up, it might be a good idea to measure your BBT. 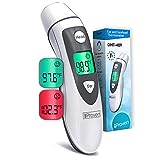 Basal temperature is the temperature of a specific body part right after waking up. It can be used as a reliable method for determining ovulation and is especially popular among women trying to conceive.

Measuring basal body temperature (BBT) is quite simple, as long as you know the rules that should be followed.

Start measuring BBT during the first day of your monthly menstrual cycle. The equipment needed for the procedure is basic – any thermometer would do. Basal body temperature can be measures orally, rectally or vaginally.

How does BBT work?
Two hormones in the female body regulate the menstrual cycle. Estrogen is predominant during the first half of the cycle (the follicular phase). Estrogen helps for the production of an ovum that will be discharged during the process of ovulation.

During the second stage of the menstrual cycle, the luteal phase, progesterone becomes controlling. BBT is based on the availability and predominance of these two hormones. Estrogen is known as a ‘cold’ hormone, while progesterone is the exact opposite. Before ovulation the BBT is lower. After ovulation takes place, the temperature increases slightly. Taking into consideration these facts, you can determine your ovulation based on BBT.

Getting started
Buy a reliable thermometer. A digital one will probably be the best option, which still remains quite inexpensive.

Make sure that the thermometer you have measures temperature correctly to the tenth of a digit. This is needed since the change in BBT is usually quite small, yet significant.

You will also need a chart showing temperature during each day of your cycle. Such charts can be discovered online. The best part about these is that you can also keep track of other occurrences during your cycle that can help you determining your ovulation with precision.

Measuring BBT
BBT must be measured directly after you wake up. This means opening your eyes and getting a hold of the thermometer. You need to measure BBT before washing your teeth, drinking coffee and getting ready for work.

To get precise readings, you need to measure basal body temperature at the same hour each day.

Get started during the first day of your cycle, that is the first day during which you get a menstrual bleeding. Measure your temperature in the morning and record the number in your BBT chart.

The typical pre-ovulation BBT will vary between 36.1 and 36.8 degrees Celsius, though these figures can be strictly individual. The important thing is to notice a change during one day of your menstrual cycle. This high temperature should remain unchanged for at least three days – your ovulation period. A rule of thumb is that temperature after ovulation will remain above 36.5 degrees Celsius.