Effects of Treatment on Teenagers with Mental Illness

Teenage years can be a somewhat trying time for parents, with hormones on the rampage and moods fluctuating at the drop of a hat. Our little angels can become increasingly opinionated and difficult to please, leaving us feeling discouraged and frustrated. Some of the unwelcome behavior of teenagers is normal and parents tend to have to accept that fact, but if your son or daughter has a deeper psychological problem that warrants professional help, then read on, as this article is meant for you.

There are many reasons that your teenager may have been diagnosed with a mental health problem. Here are some of the more common disorders that are diagnosed:

Many adolescent mental health problems go undiagnosed, usually because parents and schools interpret the problems as “part of growing up”. It isn’t unusual for a crisis to develop before seeking professional help. According to Child and Adolescent Mental Health (CAMH), 10% of 5-16 year olds have a diagnosed mental health disorder. This figure may be grossly underestimated, when you consider how many children may not be seen by a doctor for evaluation.

There appears to be some confusion about the age at which a child is considered to be an adult, in mental health services in the UK. The age range can differ across the country, with some services treating 16 and 17 year olds as adults, and others taking up adult care at the age of 18 years.

When Your Adult Child Breaks Your Heart: Coping With Mental Illness, Substance Abuse, And The Problems That Tear Families Apart
Buy Now

Getting a diagnosis for your adolescent may not be as easy as you imagine. You see behavior that concerns you and know that something is very wrong. Some parents will hope it goes away, or they may not have a good relationship or rapport with their child.

Getting to the root of the problem may be more difficult if communication is bad or the parent simply isn’t supportive.

You may have a very difficult time as a parent, if you can not get your teen to accept there is a problem that warrants professional advice. This is how so many do slip through the net. Typically an adolescent may be argumentative or obstructive when you try to help, and frankly it is difficult to physically make him/her attend an appointment for a professional opinion.

The fact is that parents will sometimes have to wait until their son or daughter is willing to see a doctor, or sadly, until a crisis arises that gets the attention of school/college, the hospital, or in some cases the police. This is all a very difficult time for parents as well as the adolescent.

When everyone is co-operating, and a diagnosis is made, it can be alarming for all of the family. To suddenly have to deal with an anorexic, depressive, anxiety ridden or psychotic teenage son or daughter, can be extremely worrying and disruptive. The implications of their diagnosis can have a far reaching effect on: 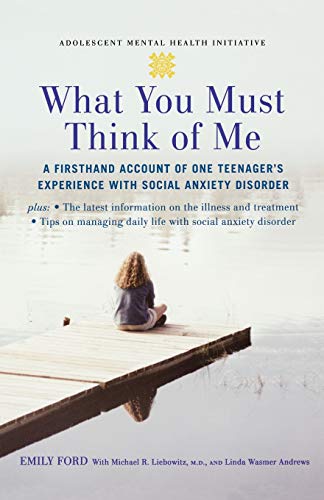 What You Must Think of Me: A Firsthand Account of One Teenager's Experience with Social Anxiety Disorder (Adolescent Mental Health Initiative)
Buy Now

Try to imagine a young man of seventeen who has just been diagnosed with bipolar disorder or schizophrenia for example. Up to this point he may have had dreams about his future, how he saw it panning out. He may be in further education or have just found employment. He will usually have a circle of friends who he socializes with on a day to day basis. He may even be in an established relationship and feel relatively happy with his life. The diagnosis will have a profound effect on all of these things.

Even if depression isn’t the primary diagnosis, teenagers can become somewhat depressed as a reaction to having to live with a mental health disorder. Suddenly they can feel more isolated as they may not want to disclose the problems to friends. They may feel embarrassed and even resist talking about it with family. The self-isolation that can result can go on to have a counter productive effect and make the illness worse.

Effects of Psychotropic or Psychiatric Medications

Some of the medications used in psychiatry are extremely potent and whilst this can appear to help the mental illness, it can also cause further problems. If there is low mood or depression as part of the diagnosis, there is always the worry that an overdose may be attempted or they may abuse the medication in some way. A teenager may already have a drug or alcohol related problem in an attempt to cope with their everyday life. If you add psychotropic drugs to the equation, there is great concern for their wellbeing and safety. Of course it would be wise in most cases, for parents to oversee the use of medications, but as we can expect in older teenagers years, this may be met with hostility.

Psychiatric medications used for mental illness can have a dulling effect. They can cause side effects such as lethargy and an urge to sleep much more. Imagine the knock-on effect with school or college, social life and general motivation. Not all medications will have this effect but many do. Suddenly your teenager may become much more inactive, and you may even begin to see the detrimental effects of medications by their general behavior and appearance. If you can see it, so can their friends. Their peers may not be very accepting of the differences they see. It is not unusual for someone who is diagnosed with a mental illness to lose friends.

Effects of In-Patient Care on Teenagers

It is possible that your teen will be admitted to a psychiatric unit or hospital. They may or may not be placed with adult patients, and if they are, this may feel wrong to both the patient and the parents. There are of course some specialized units for younger people, but provision is often lacking, especially in the UK.

Teenagers can be very impressionable and when they have a mental health problem they are also vulnerable. If you look at those two factors in the context of an in-patient scenario, there is further cause for concern.

Try to imagine two seventeen year old girls who happen to be in-patients together in the same place. One has borderline personality disorder and is self-harming. The other is suffering from a deep depression. They become quite friendly with each other, and confide in each other a great deal. The girl with depression might feel that the doctors, nurses and her parents don’t understand her. She witnesses the other girl harming herself within the unit (sadly it does happen,) and she observes how this behavior causes much attention from the staff. I will leave you to consider how that might pan out for the girl with depression. Many years ago I witnessed copycat behavior inside a mental hospital, so I know this happens.

I have seen teenagers with a simple diagnosis of depression and/or anxiety disorders, copy other mental illness related behavior, and actually gain themselves new diagnostic “labels” in the process.

New friends can be made inside psychiatric hospitals or units, and for some these friendships may be lifelong. Slowly and over time, you may find that your diagnosed teenager is spending more and more time with young people who have also got a mental illness. It is partly their way of feeling like they need to belong to a group of people who will not judge them, who understand them and with whom they can be themselves without pressure. On the one hand this is a good thing, but it can create stagnation as far as progress or recovery goes. Now we have the internet and mental health forums, friends are even easier to find.

Unless your teenager’s behavior or condition is severe, it may be best to approach a private counselor or therapist. You really need a diagnosis first, but you should be aware what it means to be a patient in the mental health system. So many things change when you are part of a system that has the ability to isolate and treat but rarely cure. By seeing a therapist or counselor you can ascertain if your teenager’s problem can both be contained and improvement achieved or expected. Of course more severe mental illness should get the attention it needs by the right professional help.