Safety Tips For The Hurricane Season

The Calm Before The Storm

The time to get prepared is well before the storm is on the horizon. That is the first most important tip anyone can ever give. By waiting to long to get prepared, you now have to fight to get what is left when everyone who forgot to prepare are at the stores buying all the food and water; the same food and water you were planning on buying, but now the store is completely out.

All outside equipment should be stored away either in the garage or brought in from outside. Tying them down with bungee cords and rope works well also if you do not have the space to store all of it indoors. Outside equipment includes heavy items also such as an outside table and chairs and or even lounge chairs. There might even be things that someone wouldn't think could be blown around, tie it up anyway! The winds in a hurricane can reach over 100 MPH and even blow cars at times. Strap everything down tight.

KNOW WHEN TO EVACUATE!

What You Will Need

If the area has not been evacuated and or you decided to hunker down and ride the storm out like so many people do, there are several things you can do to make your stay a little more comfortable.

REMEMBER: Most of the time during and after a hurricane equal to a level 1 and higher, there will be a point where no power will be available, not just for your particular house, but everyone and everywhere for miles around. So some of the items listed below are for cooking purposes if you happen to cook with electric.

There are many other things you can do and buy in order to get ready for a storm. Get creative and think outside the box. Get as much water and food as you can to help sustain you and the family for at least a week. I say a week because there have been many times even after the hurricane has come and gone that people have gone without power for 2 to 3 weeks.

Get Your Hand Crank Radio Here! 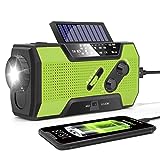 Do not venture out into the storm, not even to check on loud noises, here's why:

Once the storm has passed there will most likely be something stated on the radio about going outside and it being safe to do so. This is when you get to estimate the storm damage if there is/was any done to your house or property. There will be a lot of debris lying around in the yard and possibly even a bunch of leaves stuck all over the family car. Neighbors will get together and help one another clean up one another's yard and tell stories about their experience in the storm. Remember that a hurricane is not necessarily a scary thing to go through, depending on the strength of the storm that is.

Being safe in the storm is the most important. Get prepared before it is to late to do so, make sure there is plenty of food and water to sustain you and/or the family and that's pretty much it. Once the first hurricane has come and gone and the experience is there, preparing for the second, third or fourth will be a breeze.

More Topics Written By Me

A Brighter Day Is Ahead