With the holidays comes cold and flu season. Instead of breaking out the over the counter medications, try some of these ideas when you first feel the tell-tale tickle at the back of your throat.

When I was a kid, I used to get horrible, painful throat infections every year. Because I’m allergic to all penicillin based antibiotics and the alternatives wouldn’t stay down for very long, strep became a very scary bug to face. When I was little, it had even evolved into scarlet fever at one point.

Eventually, my mom found this recipe and decided to give it a try. It worked! After a few days of drinking a mug each day, the infection went away. Now, I use it every time my throat gets sore and I start feeling rotten. It still works every time.

As the water’s boiling, put the apple cider vinegar and honey in the mug. Once the water’s ready, fill the mug up the rest of the way and stir to blend all the ingredients. Since the vinegar’s pretty strong tasting, it’s ok to add more honey until you can tolerate the flavor.

Both white and apple cider vinegar naturally kills many types of bacteria, which is why it’s also commonly used in homemade cleaners. Many people use ACV internally on a regular basis for various reasons, because it has many health benefits, including blood sugar and appetite control. It’s also great to use on the skin and hair as a toner.

Honey is one of nature’s greatest antibiotics. It has been used for centuries to sooth tummies and boost immunity. Science has yet to explain exactly why it does this, but many believe that honey’s slightly acidic pH balance has something to do with it.

When trying this remedy, I suggest only drinking one to two mugs a day for a maximum of three days. You don’t want to go overboard with it because the drink is on the acidic side and can cause stomach problems if you take too much of it.

If you already have issues with stomach acid, it’s still ok to drink, but cut down to maybe a mug a day, or use only half as much ACV in the recipe.

Aromatherapy For Cold and Flu

Aromatherapy is an easy, safe way to alleviate symptoms. There are quite a few ways to use essential oils, but for this use, it’s better to use a burner, diffuser or humidifier.

This is my favorite recipe to use in my burner.

Always use filtered or distilled water in the burner. Just light the candle, add the drops to the water and let the vapors fill the air.

I tend towards these three oils because they kill both bacteria and viruses, and peppermint naturally opens up the breathing passages through relaxing the breathing muscles. They also act as decongestants. I’ve had a stuffed up head clear within minutes of burning them. This blend also has a tendency to relax everyone else in the room, too.

Other options include lavender and rosemary oils. They’re both antiviral and great decongestants.

Prepared blends are also available which are geared toward sinus or chest congestion. One of my favorites is a blend of rosemary, peppermint and eucalyptus. It comes in olive oil, so it’s safe to put directly on the skin. Just dab a bit under the nose and the chest. This type of aromatherapy is very nice if you’re in an office or have to be in public while you’re sick.

Most essential oils can cause skin irritation when applied directly to the skin, so always make sure to blend the oil with a carrier like olive, coconut, carrot seed or almond oil.

Herbs to Strengthen Your Immune System

When you go to the grocery store, drop by the same isle that you pick your coffee up in. Just down the way, most stores will have a tea section. The below teas are very healing and available in most stores, if they’re not already growing in your garden.

Echinacea
Also known as cone flowers, Echinacea has gotten pretty popular as an immunity boosting herb. Some studies have shown that it can cut down the infection time of a cold, while others showed no real affect. However, this herb has been used by centuries by Native Americans for this purpose, and many people have discovered they start feeling better after drinking the tea for several days. It’s best to drink it consistently for a maximum of two weeks, because it can cause an upset stomach.

Chamomile
Chamomile comes in two different varieties, as mentioned in my article about teas for digestion – German and Roman. It’s also a good option for colds and flu, because it ramps up the immune system while soothing the mind and body. Its anti-inflammatory properties also help with sinus pressure, sore throat and coughing.

Ginseng
This root has centuries of use under its belt in China. Today, it’s still commonly used to fight colds and flu, as well as quite a few other health complaints. It works through stimulating the immune system, thus enhancing its ability to fight the virus responsible for colds and flues. Some people love the flavor, but others don’t care for it. I tend to fall into the second group, but honey can usually make it easier to tolerate. 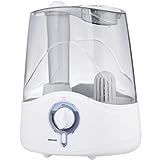 One of the reasons why colds and flues hit so hard in the winter is because the air is so dry. Viruses tend to grow like crazy in dry conditions, which is why they’re less likely to hit during the summer. People also feel the dryness of the air in their lungs and sinuses, which makes them more susceptible to infection.

That’s part of why steam helps the recovery time. When we breathe in the steam, it helps break up congestion through moisturizing the mucus membranes, and flushes the mucus from breathing passages more easily.

If you don’t have a humidifier, put a pot of water on the oven and set the burner on low. Let the water simmer through the day to add a little more humidity to the air. Just be sure to refill it whenever it gets low. If you want to, you can combine the steam treatment with aromatherapy by putting a few drops of peppermint or tea tree oil in the water. Turn the burner off whenever you leave and don’t leave it unattended if there are children big enough to pull it down are around.

Another thing you can do is turn your shower on hot and sit in the bathroom as it steams for several minutes. A soothing bath will work in the same way. Adding salts and one or two drops of essential oils will let your skin detoxify while soaking in the benefits of the oils at the same time.

Your body’s working hard to beat the infection, which is why fatigue is always a part of being sick. The best thing to do is stay home and rest. Of course, that’s not an option for most people, due to life’s demands, but you still need more sleep than you usually get when ill. So, curl up with a cup of tea, a good book and a pet as you let your body do what it needs to.

Use a Neti Pot

Many people are a little disgusted at the thought of using a neti pot, but it really does work wonders. When used properly, it clears the sinuses and can cut down on infection time quite impressively. Most neti pots come with instructions and a package of powdered salt. Seasalt is also an option, once the powder is gone. In essence, when you add it to warm water, you’re just making a mild saline solution.

Always use distilled water when you use one of these. If that’s not available, boil the water first and let it cool to being lukewarm. This is because bacteria in water can settle in the sinuses and cause another infection. Boiling water kills all bacteria and eliminates the possibility of making yourself sicker by accident. Always clean the neti pot thoroughly once you’re done using it.

When you first start using it, I have to admit that feels really strange, but you get used it it after a while. Some people use it every day, but I tend to do it only when I'm sick or have allergies.

Of course, the best way to handle cold and flu season is to take the best care of yourself possible throughout the rest of the year. Do your best to get the rest you need, exercise regularly and eat well. However, when you do get sick, treating the bug early will prevent it from getting worse than it needs to be.