The Cancer Emergency Room is a thoughtful new concept open in Central Ohio as the prototype for the nation before Christmas 2014. The improvements to our major cancer center are jaw dropping in a facility complex that resembles a high tech space colony.

The design of the larger building facilitates a tight partnership among patients and families or friends, treatment and diagnostic professionals, and researchers. Intense individual treatment and dedicated focus on patients is the norm here.

Where is this Emergency Room or Emergency Department for cancer patients?

At the James Cancer Hospital and Solove Research Institute (popularly called The James) at The Ohio State University Comprehensive Cancer Center (OSUCCC), we have such an emergency department. The medical center's long name for a giant complex at 300 West 10th Avenue in Columbus Ohio represents an even longer dedication to ultimately eradication cancer.

“In emergency situations, cancer patients can have very specific needs.”

Guarding Against Infections in Cancer Patients

In the 1990s, a psychologist and professor undergoing chemotherapy treatment for cancer made sure to wear a surgical mask in public to guard against exposure to infectious diseases, including colds and flu. I sadly recall a day in which she ran out of an office at high speed as fast as her weak legs could churn, when a person in the waiting area sneezed without covering his mouth and nose. She was terrified.

People enduring cancer treatment experience a compromise to the immune system that subjects them to higher than average risk of infection. Their medical challenges reach beyond their cancers and lesser illnesses to cause general fatigue and other conditions that make emergency room visits more dangerous than average for them.

The James Cancer Hospital Emergency Department separates cancer patients into a specially dedicated area, where they are helped according to their individual needs as quickly s possible. A cold or the flu can escalate speedily in a compromised immune system and lead to premature death, but The James means to alleviate that possibility. 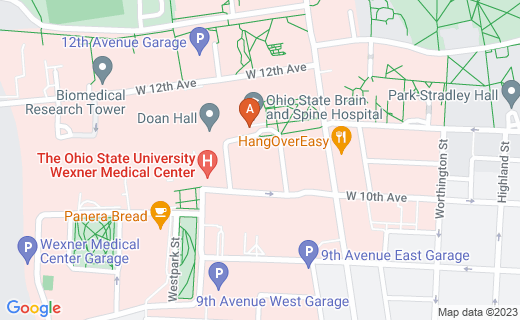 At The Ohio State University Medical Center, we are committed to providing high-quality, personalized health care services to all of our patients, regardless of their ability to pay.

Getting the Word Out

Thankful for medical and public health training received at the Ohio State University, I became the first social media supporter of The James on THUNDERCLAP. If you would like to help spread the word at no cost, join the site at the link.

Researchers, Clinicians and Patients All on the Same Floor

The entire cancer hospital at OSU has been redesigned to provide patients exactly what they need as fast and accurately as possible and the ER is just one element of the whole.

The new facility is four times as large as the already-large cancer hospital that operated from 1990 - 2015.

Do you recall learning that 19th and 20th century physicians often researched on themselves and their families in order to devise treatment methods and products? They often had everything at home - office, laboratory, doctor, and patients.

The OSUCCC - James is a comprehensive cancer center specializing in prevention, detection, treatment and research aimed at creating a cancer-free world.

The James - Importance of Women’s Health and Cancer

I am stunned by the cash outlay for this portion of the building and the care and thought that went into its construction. Our hospital was helped by an Obamacare Grant of $100,000,000 and The James used it well.

We now have eight linear accelerators for radiation treatment. For radiation safety, the walls of radiation rooms are five-concrete-blocks thick. They are then lined with concrete that is impregnated with hematite and steel shot, raising the construction costs 28 times to assure safety off all concerned. On top of this, the radiation rooms use 10-ton steel doors filled with lead bricks for shielding. It sounds like a TV or film space station -- The hallways are bright-white with lighting to match.

For patient comfort, the radiation technician and project soothing colors onto the recessed ceilings. This type of lighting was used in the grand old movie theaters of Columbus, Ohio before "relaxation" therapy was popular.

A CyberKnife® Robotic Radiosurgery System is an incision-free treatment delivery service for cancerous/non-cancerous tumors anywhere in the body. It has reached Ohio and proven reliable.

Work with robotic surgery techniques at The James will aid development of surgical techniques and equipment for use in the Final Frontier of the US private and public space programs.

I first learned of Cyberknife Robotic Surgery several years ago in Michigan. In 2014, The James added robotic surgery capabilities.

Space Age Surgery at The James

All 14 operating rooms are located on one floor, with each room set up exactly the same, so no one has to search for equipment. This saves time and promotes accuracy. All patient rooms are set up the same way, too, so medical gasses are always available on the same wall position, on the same wall, from the same structure at the head of the bed.

Two Operating theaters surround a 3 Tesla MRI for scanning the brain during surgery and two other ORs can use radiation during surgery -- Safety features here far outstrip national standards, so scanning and radiation are safe for everyone involved in the treatment.

Patients' family and friends are not just "sent to chairs" to wait, as in the TV series ER!

The waiting lounge of The James is a high class preferred-flyers-club kind of arrangement with heavy recliners behind a wonderful sheltering screen, where people can sleep. Big screen TVs are also arranged for convenient watching. There is also a kitchen and a computer alcove.

A hallway with private rooms is used to present news and options to companions and family members - no more surprises in the hallways in front of the public.

The James plans to end the national tradition of bad hospital food.

Rooftop gardens are wide spread across two long wings and contain foods like tomatoes. cruciferous vegetables, and black raspberries. The produce is used n hospital kitchens for the Dining on Demand food wing - no more late or incorrect meal service of tepid, bland foods in patient rooms. Patients can eat with everyone else.

Mr. Chris Draft of the San Francisco 49ers lost his wife Keasha to cancer one month after their marriage, so his foundation promotes cancer treatment and research as well as lung diseases overall (he has asthma).

A non-smoker, Keasha was 37 in December 2010 when she was diagnosed initially at Stage IV. According to the Chris Draft Family Foundation’s website, her one symptom was "slight shortness of breath a few days earlier.” As sad as this is, her death propelled Chris to look further into cancer research and save thousands of other lives.

Review the videos below of The James staffers who are members of Team Draft.