The Myth of Complete Protein and Protein Deficiency

The Protein Myth and Beautiful Vegan

What is a Complete Protein

The correct answer to this now is that there is no such thing, just like the idea of the world being flat. This was written April 20, 2013. This comes from the U.S. National Library of Medicine that is one of the NIHs (National Institutes of Health). They say under Protein in Diet:

A diet high in meat can contribute to high cholesterol levels or other diseases such as gout. A high-protein diet may also put a strain on the kidneys.

Note that the above has been taken off the above site. You can do a search and see that other sites found this and have put it on their site like The New York Times. So let me explain why there are no unprocessed foods that do not contain all of the 9 amino acids. I have the Nutrition Almanac that lists the essential amino acids of all the fruits and vegetables. None have a 0 and all of them are in proportions close to the ideal amount.

For example a cup of watermelon has 11 mg of tryptophan, 43 mg of threonine, 30 mg of isoleucine, 29 mg of leucine, 99 mg of lycine, 10 mg of methionine, 24 mg of phenylalanine and 26 mg of valine. The 9th essential amino acid was added after the above was written.

The Centers for Disease Control and Prevention takes a stab at it under Protein and even gets the old definition wrong:

A complete protein source is one that provides all of the essential amino acids.

An incomplete protein source is one that is low in one or more of the essential amino acids.

The second paragraph is right and shows what is wrong with the first paragraph. So the first one should say that none of the essential amino acids are low. Of course how low is low? Is it 5% less than optimal or 50% less than optimal. So you are learning why it is no longer used. Note that the purpose of this whole myth is to sell meat and dairy products. The meat industry sued Oprah and the meat industry lost. But some say their whole point was to intimidate or scare others to not say anything bad about meat.

Wikipedia has a good definition for the outdated term complete protein under Complete Protein. It says:

A complete protein (or whole protein) is a source of protein that contains an adequate proportion of all nine of the essential amino acids necessary for the dietary needs of humans or other animals.

It gives the amino acids in potatoes that is known as a high carb food as an example. Decades ago they tried an experiment where a guy ate only potatoes and margarine for one year and he felt fine after one year on this diet.

Webpage with more about potatoes says:

The potato is thought to have originated in what is now Peru, on the shores of lake Titicaca. Native Peruvians such as the Quechua have been highly dependent on the potato for thousands of years. A 1964 study of the Quechua inhabitants of Nuñoa showed that they obtained 74% of their calories from potatoes (fresh and chuños), 10% from grains, 10% from Chenopodia (quinoa and cañihua), and 4% from animal foods.

Starting nearly a century ago, a few scientists decided to feed volunteers potato-only diets to achieve various research objectives. The first such experiment was carried out by a Dr. M. Hindhede and published in 1913 (described in 15). Hindhede's goal was to explore the lower limit of the human protein requirement and the biological quality of potato protein. He fed three healthy adult men almost nothing but potatoes and margarine for 309 days (margarine was not made from hydrogenated seed oils at the time), all while making them do progressively more demanding physical labor. They apparently remained in good physical condition.

These people had no problems from following this diet. Some people describe potatoes as deadly nightshade plants just as they say that tomatoes are also part of the deadly nightshade. Tobacco is also a member of this group. All of the above plants contain nicotine. Also included in this group are eggplants, bell peppers and hot peppers. Note that the hot pepper called cayenne is considered the best herb in American herbology or American herbalism.

Is There Protein Deficiency

Kwashiorkor is actually the result of a lack of protein in the diet. It is found in third world countries suffering from starvation. So you could say that it is a type of starvation. But it is non-existent in countries like the United States, Canada or the U.K. unless a child is being abused by the parents.

As far as the above saying that all the essential amino acids being in all foods, it is talking about non-processed foods like dead animals and plant foods. Of course there are jelly beans and other foods like that, that may not have any amino acids. So there is no need to worry about a lack of protein. Even body builders only add a tiny bit of muscle to their body, so they do not need to worry about not getting enough.

What about getting too much? When you eat carbs or fats, the body can store them. Excess protein cannot be stored and so it is broken down. This creates toxins that hurt the body so that America is not among the top 25 healthiest or longest living countries. This is why Wikipedia says that dairy makes your bones weaker. The high protein in it causes you to urinate out more calcium.

Now on one nutrition website they use complete protein to mean a near perfect ratio of amino acids that is 100 or more. There is nothing wrong with having a ratio that is not near perfect. Also here is something interesting. Going by this definition of having 100 or more which food is a complete protein? Kiwi fruit or beef bottom sirloin.

At one time people were concerned about eating different foods to make sure that they got enough of each amino acid. The only thing to be concerned about is not eating too much protein that is common among our society just like many of the diseases. Also I have an article about the Latest Science of Health Benefits of a Vegan or Plant-based Diet.

Please note that the second book below is by Joel Fuhrman M.D. He is the country's leading expert in not eating or fasting. He supervises people to fast and then gets them to change their diet to a nutrient dense vegan diet (called the nutritarian diet) to make sure that their problems do not return.

So who in their right mind goes to a doctor that is going to have them not eat (fast) for weeks? Note they only consume pure water. Some people are told by their doctors that there is no hope for them and they are going to die. Those are the people that go to Dr. Fuhrman. He has them fast until they are no longer in danger of dying and has them change their diet permanently.

Hundreds of medical doctors follow his diet and he created the ANDI (aggregate nutrient density index) scale that is used by Whole Foods markets. Also here he is on the Dr. Oz TV show explaining why medications (drugs) do not work. Read what is said under the book below for more on his results.

Book About Protein Myth and about a vegan or plant based diet by a medical doctor. 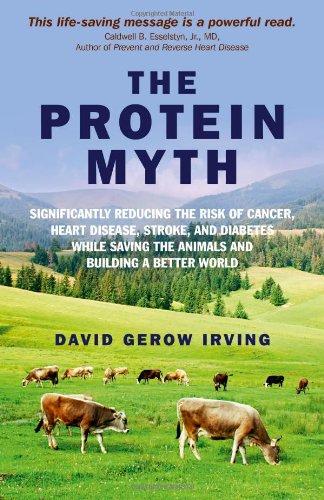 The Protein Myth: Significantly reducing the Risk of Cancer, Heart Disease, Stoke and Diabetes while Saving the Animals and the Planet
Buy Now

The Protein Myth: Note that the guy on this is thin! He has too much muscle.

The Vegan Protein Myth: She asks have you ever met someone that is protein deficient?