The Real Truth About Bottled Water

Water. We all need it, we can’t survive without it. It’s essential to our health. So, where do you get yours? Are you one of those people that carries around a bottle of water with you wherever you go? You carry it because you want to have nice, clean, fresh water with you at all times, whenever you happen to want a drink. Those little plastic bottles of wonderful pure water are so convenient. You just buy them at the store, stock the fridge and grab one whenever you need it. Great right?

Well, as with many things created by man, on the surface, they seem wonderful but the unintended consequences are somewhat less beneficial and can even do long term harm.

First though, I want to you to take a look and ponder a moment about the whole bottled water concept itself. How did we get here?

When I was growing up, and I grew up on a small farm in Michigan, our water came from our well. It came right out of the ground and we didn’t treat it in any way, we just used it and drank it just as it arrived out of the spigot. We drank water right from the garden hose when we were outside. When I went to school, the water came out of the tap from the city water system. We drank from the drinking fountains in the hallways. We did these things because it was normal, it’s what we had. Bottled water hadn’t been “invented” yet.

Back then, if someone had come along and said, “I’m going to put water into a bottle and sell it”, people would have laughed and thought he was crazy. How could someone sell something that anyone can get for free? There could never be a market for that. Nobody in their right mind would pay for water in a bottle.

Well, “marketing” is an amazing thing. That’s when ad men convince us that we just can’t do without something that we don’t really need. They mounted a campaign that sold the concept of bottled water to us gullible consumers. They told us how that “unpure” product that comes out of every tap in America and that we have been drinking for generations, indeed, for millennia, is somehow now unhealthy. To be safe and maintain our health, we must now buy our water from the store shelves, as it is a far superior product than the mere “common” water. And we bought it.

They told us that this particular water came from a special, pure spring in some remote place untouched and uncontaminated by man. Or it came from a clear mountain stream, fresh and clean and pure as mother nature herself. Other brands went through a special purification process, reverse osmosis, distillation or some revolutionary new filtration method to make it more desirable than regular old water.

Go Green - Save Money - Save the Planet

Well, guess what I found out. Some of those so called “premium” waters come from a city water system. That’s right, it’s plain old tap water, same as you could get out of the faucet in your kitchen. It may be filtered but in most cases, it’s not any better quality.

How many water bottles are created each year? It’s been estimated that over 200 billion bottles of water are produced and consumed globally each year, 50 billion just in the U.S. and even though they are recyclable, about 80% of them end up directly in a landfill. And guess what friends, plastic bottles don’t biodegrade.

The energy consumption to produce bottled water is staggering. 17 million barrels of oil are used in producing bottled water each year. I wonder how much that affects the price of gas at the pump?

It’s also been estimated that there is more water used to produce each plastic bottle than would fit inside it after it’s made.

And let’s take a quick look at what we spend on this wonderful product. If you go to a vending machine and buy a 20 oz. bottle of water, it will cost you a dollar or maybe even more. There are 128 ounces in a gallon so you are spending $6.40 per gallon for water. And you thought gasoline was expensive... What does a gallon of water out of the tap cost? In most cities, less than a penny.

So what do we do as an alternative to this gargantuan waste of money and resources? Well, let me tell you a story. My son was a bottled water addict. He wouldn’t drink tap water because he insisted that bottled water had a much better taste than regular water. He would only buy the best brand name water. So, I decided to do a little experiment. I saved a few empty water bottles and filled them up with water from the tap that I had run through my filter pitcher.

One day he grabbed one and started swigging it down and I asked him if that water was really that much tastier than any other water. He proceeded to tell me how it was noticeably better tasting than regular water and how much he liked it. Imagine his surprise when I told him what he was really drinking. At first he didn’t believe it but finally I convinced him that what he was enjoying so much was just regular old water that had been run through a carbon filter, which in many cases, is the same exact thing that’s bottled and sold as premium.

So there you have it folks. Get yourself a good filter pitcher and a stainless steel bottle for when you’re on the go and you can save yourself hundreds of dollars a year, not to mention helping out the planet in the process. 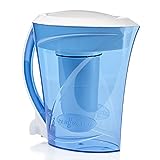