What is Xylitol and what are its health benefits?

At a trip to the dentist with my children over the summer, my hygienist asked me if I used products that contained Xylitol. I told her that I didn’t think so and of course asked her what it was. She explained that Xylitol is a sugar substitute that helps to prevent tooth decay and that there are some great products available with Xylitol in them. Although my husband is a diabetic and uses sugar substitutes, I do not use them for my children. The artificial sweeteners are not really good for anyone, but especially for growing bodies. So I had my doubts about whether this would really be a good fit for my family.

Xylitol was discovered in the late 1800s. Although Xylitol has been around for many years, it is just beginning to become more visible here in the United States. If asked, many Americans can name sweeteners such as sucralose and aspartame. More recently there have been an increase in products that contain extracts from the plant Stevia, but little is said about Xylitol. So what is Xylitol and how can it impact your life?

Xylitol is a sugar substitute that is found naturally in certain fibrous fruits and vegetables. It is extracted from the plants and processed into white crystaline granules. It takes like sugar and has no after taste that is often found in artificial sweeteners.

The reason that my hygienist brought this sweetener to my attention was for its ability to naturally inhibit tooth decay. She suggested that simply chewing on a piece of gum or sucking on candy that contained Xylitol would help to prevent cavities if you could not get to the sink to brush your teeth. So as I researched this product, I found that indeed there are benefits to preventing tooth decay. It seems that the while sucrose (sugar) gives the food in your mouth energy, Xylitol works in the opposite way. It helps the pH levels in your mouth remain neutral (providing more alkaline in the mouth rather than the typical acidic nature that mouths have after eating) and keeps the bacteria from sticking to your teeth. Therefore preventing the cavities from forming. It also does not have the same harmful effects that fluoride has when swallowed so it can be used by children of all ages. My hygienist stated that she actually sends her children to school with a small piece of candy containing Xylitol for them to suck on after lunch since they are unable to brush their teeth.

Research has also shown that the presence of Xylitol can also inhibit the production of infections. Like cavities, ear infections develop in an acidic environment. So adding Xylitol to ones diet, could in fact reduce the number of ear infections that you develop each year. If your children are prone to ear infections, you may want to discuss with your pediatrician or ear, nose, and throat specialist the possibility of Xylitol helping to reduce the outbreak of infections in your child.

Since Xylitol is not the same as sugar, it is found to be more safe for diabetics. Of course as with any change in diet, one must consult your own physician for what is right for you. However, Xylitol takes longer than common table sugar to absorb in the body. It therefore prevents the spikes in insulin that one typically finds in eating sweet foods. This makes it a much more desirable product for diabetics to use.

Since this is a naturally occurring product, it would make sense that it is safe to use during pregnancy. I know that while I was pregnant I had to cut out any sweeteners that I used in my coffee or diet beverages. I also wanted to be sure that I wasn't over indulging in sugary products. Had I been aware of this product during my pregnancy, I would have discussed the possibility of using this as an alternative. So if you are expecting, you may want to talk with your OBGYN about using it during pregnancy. 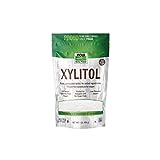 Xylitol in Cooking and Baking

Xylitol has the same intensity of sweetness as sugar but with 60% less calories. It's cooking ratio is one to one. So if you decide to try cooking with Xylitol, you would use the same amount of Xylitol in the recipe in place of the sugar.

A word of caution: Because many of the health benefits involve the prevention of the growth of yeast, it will not help you in yeast based recipes. It is also known to absorb moisture. So if you decide to bake with Xylitol, be aware of the possible need to add more moisture to your recipe.

If you have dogs, please be careful because it can be very dangerous to dogs. In addition, beware that overuse of Xylitol at any given setting can cause abdominal cramping and diarrhea. As with most things, use it in moderation.

I have switched to using toothpaste that contains Xylitol for my children. Our toothpaste will be next once we run out of the Costco stock! It is a little more difficult to find. It is not typically found at regular grocery stores like Kroger or other stores like Target. Whole Foods has been known to carry these products and they can also be ordered through sites like amazon.

How much did you previously know about Xylitol?