Whispers in the Wind: Reflections of a Thankful Heart

Patricia is someone whose life is centered around family. Each day is one more opportunity to show my loved ones how much they mean to me.

June 8 2018 Her hair is gone but her spirit soars....we are so thankful she has weathered so many storms.

Read more about our journey

Hope has helped us make this journey year after year.... https://letterpile.com/inspirational/Hope-Just-Ahead

Still thankful. Years later my Stef is once again battling the ravaging cancer that has metastasized throughout her body including her lymph glands. She has just undergone heavy duty chemo treatment and is now on oral chemo for three months. And after that time the doctors will revisit and see if it helped.

The oncologist told her that she has a year or less left on the planet but she has defied the odds so many times that we are not giving up. Each new day is a new opportunity to embrace all that is offered to us. So she soldiers on...and we, her family soldier on too.

And we remain ever thankful for the time she and Jay and Heston Wayne have already had on this planet.

Love and hug and squeeze those you adore...every single day. Today is our reality.

My Girl with her Best Friend

Gratitude unlocks the fullness of life. It turns what we have into enough, and more. It turns denial into acceptance, chaos to order, confusion to clarity. It can turn a meal into a feast, a house into a home, a stranger into a friend.

My girl loving her Aunt ...

Much of this recounting I have told before in other hubs. But in order to understand what is happening now and how we are feeling, it is necessary to bring up-to-date those who have not read the other hubs.

What a crazy thing to say. How can anyone be thankful that cancer showed up, uninvited and unwanted, intrusive and destructive leaving devastation in its wake?

And the answer is "It's not quite that simple."

You can choose to be thankful for every day that you have after that diagnosis comes. Thankful that a future comes.

We have learned so many incredible lessons about the strength of the human spirit, the love that even strangers offer, and the abundance of joy each day can bring in spite of challenges that would try to bring you to your knees.

Birthday party, age 15, with Baby Brother and His Momma

We have been so blessed. My daughter, my grandson, and I since 1999 when my grandson was first diagnosed with cancer and a most unplanned and unwanted odyssey has evolved.

For many years our lives have been consumed by illness. Cancer chose my grandson and then four years later or so it choose my daughter.

Over the years writing about it has helped to work through questions that have sometimes stolen my nights. Questions of how and when and what have come in the night and still do.

Not 'why'---because stuff happens. That is why.

Maybe this is the way we should all do it...

Age 17, Another Milestone for This Precious Grandson

Blessed? Yes, over and over, time and time again, the blessings have flowed our way.

The first real blessing was when my grandson who is now 19 was first diagnosed at age 4. For the first four years of his life he was deathly ill. One hospitalization after another, and never really getting better. No clear diagnosis ever. Just sick, bone thin, and then a bit of time when he would recover to an extent, and then the cycle continued.

We had been from Orlando to Atlanta in search of an answer and none came. Finally when he was four we decided to return to Florida in the hopes that at Shands we would find the answers hat we had sought but had found nowhere else.

So I left my teaching position and we packed up our things and returned once again to Florida.

And that was the beginning of our blessings.

Little Man with his Momma

After my grandson's diagnosis in the spring of his fourth year, our lives revolved around doctor visits, tests, more tests, and treatment. But we had an answer, a diagnosis and life was beginning to take on normalcy amidst the less than normal circumstances we now found ourselves in.

This was our new normal.

Having the care of those who had uncovered his illness and were treating him gave us direction now...we were on the way to a cure, we thought.

But not for too long.

As the months passed after that initial diagnosis and treatment, he did not in fact get better. He slowly slipped into worse health and the medical answers were not changing the progression of his illness.

Some time that year the doctors told us that he would not live to be six. He was so weak and the disease was progressing so rapidly that he would be gone within two years, less than two by the time they told us.

And he we rejoiced as he celebrated age six.

Our second blessing and only one more of many to come.

The high we felt after maneuvering that hurdle did not last long for soon after they told us that he certainly would never be nine. We should be prepared.

He had long periods of illness when he lay curled in a tiny ball, unable to eat or drink, due to the sores that lined his mouth and throat.

But age nine came and then eleven and our hearts sang and we began to think maybe all that we had been told had been a misdiagnosis. However a few months after he turned eleven he was diagnosed as terminal. When you hear that word it is like no other.

It suggests that the person will be gone within a short time so live it up ...the Grim Reaper is coming knockin' soon.

For those of you that have heard this diagnosis, you know that is not the case. But we did not know it at that time. And little did we know what waited ahead.

At 20, my Grandson is Now a Young Man

How a miracle can be simple is beyond my capacity to understand for there is noting simple about them.

But that was what doctors said and still say to my daughter. "It is simply a miracle that you are still on the planet, you know. You really should not still be here."

An Unwanted Journey that Taught Us Many Lessons

Fast forward to 2008 when my daughter was diagnosed as terminal and told to get serious about the partying because her days were numbered too.

And truth be told, aren't all of us living on borrowed time? Our life on this planet is finite so perhaps we all should heed the advice of many a Country and Western singer who advises us to live like there is no tomorrow.

So now both of them had the same sentence ...before long, death would snatch them from our lives.

The journey with both of them has been one not unlike one trying to cross a room covered with the proverbial egg shells making the effort not to break one. Circuitous, frightening, but awesome and filled with blessings.

Fun with Her Baby Son

A Real Reason to Be Thankful

Now, just before Thanksgiving, we have more news that is not surprising but is devastating none the less. Does that make sense? If you know something is coming, can it rattle you to your bones?

For us it did, for the moment. And as we always we, we rally. We shake off the ashes that would cling to us, the fear that would steal our day, and we march on.

My daughter's surgery this past Tuesday (the week before Thanksgiving) found new tumors. After the surgery the doctors wanted to admit my daughter and begin chemo which has so often almost killed her. She said she just wanted to go home and have a wonderful Thanksgiving and Christmas with her family. And after the first of the year she will return and the options will be discussed.

As I drove her home that afternoon, she was calm and at peace. And she said how lovely the doctors had been. And one of them had said how sorry he was with her results. She replied with a phrase we both kind of despise but it just worked in this case: "It is what it is."

And the doctors agreed.

She has many doctor visits prior to the first of the year. She had one yesterday...they did an MRI of her brain to see what is happening with the tumors there and the markers were done for radiation on her neck.

She came home looking tired but as beautiful as I have ever seen her and held her baby son, who is now four, in her arms and smooched on him.

Blessed. Yes. We are.

So many send us good wishes and love and prayers that we cannot possibly feel any other way.

Topping off all of our many blessings, we have one huge reason to be thankful this year: she is on the planet and so is my grandson.

They both asked me what I want for Christmas. You will know my answer. All I want is for them to be well. That is all. No THING could bring me more happiness

There's that word again...'blessings.' We have been blessed and we are blessed.

My grandson has turned nineteen now and he still has many issues. He still has chemo from time to time and is on many meds but he is on the planet.

How can we not feel blessed when he is still here when we were told so many years ago he would soon leave us?

One thing my daughter has done all along the way in this journey is to be proactive in her care.

She has made decisions about what chemo she would receive, what clinical trials she would participate in, what surgery she would have.

She has also done something that may surprise you. She has refused to take any pain meds that would affect her ability to function well. Any meds that would leave her virtually in a stupor have been refused. And she endures the pain that would make most of us totally lose our minds.

Why? Not a martyr by any means. But she wants to be awake and functioning for her children and her 'old man' as she calls him.

She cooks and cleans and sews and crafts and carries on despite all of the pain that is present on a daily basis.

Today is What Matters...

Over the years as we have climbed these mountains, we have learned how to live as we should.

We make every day count.

And the little stuff, it just doesn't matter.

And trying to second guess what may come, that does not matter either.

What matters is TODAY.

So .....make it matter for you and for those that you love.

Don't wait till something horrible happens.

Live today to the fullest.

It is after all what you have. Tomorrow is not promised.

Say all of the wonderfully crazy, silly, funny, passionate, and romantic things to those that you love. 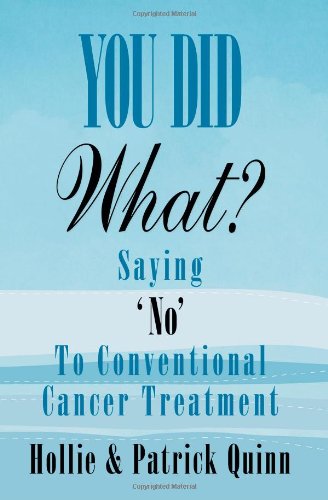 You Did What? Saying 'No' To Conventional Cancer Treatment
Buy Now