Are you aware of the fact that Teflon is a danger to your health?  I wasn’t.  While surfing the net, I came across and alternative health site that was discussing this fact.  But, as they were also selling “safe cookware”, I decided to research it for myself.

Canaries in the Mines

For many years canaries where used to protect miners when they entered the mines.  Miners used them as an early warning system.  Small birds are extremely sensitive to toxins in the air.  When poisonous gases began to seep into the mine shafts, the canaries would stop singing.  This was a signal to the miners to leave the mine and head for fresh air.  What has this to do with Teflon?  Read on.

Avian veterinarians have known for decades the dangers of non-stick coatings to small birds. It even has a name, “Teflon toxicosis” (poisoning). Dr. Roger Wells of MichiganStateUniversity calls the birds’ response to the fumes from non-stick coatings as “acute respiratory failure leading to rapid death”. This description of Teflon toxicosis is echoed by Dr. Larry Thompson at the University Of Illinois College Of Veterinary Medicine. It is a horrible way for a bird to die. Please to www.ewg.org to learn more about the dangers of Teflon toxicosis. Be sure to read the bird diaries as they will show you the danger Teflon posses to birds.

What does Teflon toxicosis has to do with our health?

A lot!  DuPont, the manufacturer of Teflon, has known for over 50 years that the fumes from their non-stick coating caused what is known as “polymer fume fever” in its workers that handle Teflon.  DuPont found that “polymer fume fever” could lead to pulmonary edema (the lungs filling with fluid) and death.

DuPont has claimed that their non-stick coating does not emit hazardous chemicals at normal cooking temperatures. In a recent press release, DuPont stated that “significant decomposition of the coating will occur only when temperatures exceed 600 degrees Fahrenheit. That’s just not true

DuPont’s own studies showed that at 446 degrees Fahrenheit Teflon was capable of producing fumes. While at the temperature of 680 degrees, Teflon pans released at least 6 different toxic gases. As you can see, normal cooking temperatures are high enough to cause the release of toxic chemicals even according to DuPont.

Documents from DuPont showed that the company couldn’t find a safe level of exposure to Teflon as far back as 1973. Rather that look for safer alternatives, DuPont chose to save money instead. Check this web site www.ewg.org/issues/pfcs/20051116/index.php to read what a former DuPont scientist has to say about Teflon.

University level testing has found out:

The EPA has stepped in.

On Thursday, May 19, 2005, DuPont was served with a subpoena from the Justice Department’s Environmental Crimes Unit requesting documents on a key Teflon chemical.  Because of this investigation DuPont agreed to pay up tp $40 million in a civil settlement for Teflon pollution and the subjects of an EPA’s investigation into its cover up of the studies of Teflon’s health effects.

Now that you know the dangers of Teflon, throw away anything that has a non-stick coating on it.  All non stick coating is dangerous, not just Teflon.

Your nonstick cookware is on it’s way to the trash can, right. Remember to avoid aluminum as well. Aluminum pans have been linked to Alzheimer’s disease.  So what can you safely cook on?

Stainless steel cookware is non reactive and is safe to use.

Enamel cookware is safe as long as the coating is intact.

Copper cookware is safe if it is lined

But the simplest and safest is the same cookware your grandmother used, cast iron.

Cast iron has been my favorite cookware for at least the last 30 years. I use it to cook on top of the stove and in the oven. I even use my small frying pan to bake cornbread. To season it is so easy. Just wipe a little olive oil all over the inside of the pan and pop it in an oven heated to about 100 to 200 degrees. Just let the cast iron heat for a couple of hours and it is seasoned and ready to go. I usually use a little Mazola olive oil spray (did you know that the non stick sprays have nasties in them?) and it cooks as well as any non-stick coating out there. There’s also no need to worry about scratching the non-stick surface. Most of the time all you need to do is wipe it out and put away. If it should need to be scrubbed, I just use a #3 or #4 steel wool pad and go to town. If the pan looses it seasoning, well its back in the oven with a little olive oil and it’s good as new. Try that with a non-stick pan. 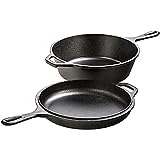