Essentials for Evacuation: What to Do When Your Town Faces Forest Fire or Wildfire

Unless otherwise indicated, this information has been authored by an employee or employees of the University of California, operator of the Los Alamos National Laboratory under Contract No. W-7405-ENG-36 with the U.S. Department of Energy. The U.S. Government has rights to use, reproduce, and distribute this information. The public may copy and use this information without charge, provided that this Notice and any statement of authorship are reproduced on all copies. Neither the Government nor the University makes any warranty, express or implied, or assumes any liability or responsibility for the use of this information.

How do you prepare to evacuate from a wildfire? Maybe you want to learn about evacuating in general, or what a forest fire can do when it meets a town. Or maybe you, like many scientists scattered around the world, have been to Los Alamos and are interested in hearing what Los Alamos residents did during the fire in 2000 known as the Cerro Grande fire, which seemed so destructive at the time (10% of Los Alamos was affected). Or maybe you saw the reports of the Las Conchas fire in 2011, which was so big (burning more acreage in one day than the Cerro Grande fire ever burned) the Cerro Grande became just the dress rehearsal and firebreak for it.

Here are some lessons Los Alamos residents learned from the Cerro Grande fire and the Las Conchas fire, that threatened the mountain town of Los Alamos, New Mexico, 11 years apart. This HubPage is intended to be a work in progress as I collect more information, such as the experiences of a disabled woman who was one of the last evacuated in 2000, so please check this page again later on if you're interested. I also hope to upload some pictures I took on a trip to Los Alamos. But meanwhile I want to get at least some information out there, as the 2012 fire season starts.

A unique forest fire situation many can learn from

Los Alamos is a unique town. It is a small town not on the way to anywhere that draws highly educated residents from many nations to work or consult at Los Alamos National Laboratory. Since the Lab works on many things related to national security, anything affecting that work gets attention nationwide if not worldwide. (For instance, in 2000, Russia offered to send some airplanes to help with this fire right next to closed-off airspace. No thank you, was the answer!)

The town of Los Alamos borders two Indian pueblos on its north and east. The Lab is south of the town, and the south border of the Lab is Bandelier National Monument. Forest fires don't recognize the boundaries between land belonging to the Forest Service, Bureau of Land Management, Santa Clara Pueblo, Department of Energy, Los Alamos County, and the State of New Mexico. You can imagine how complex the interagency cooperation gets! The 2000 fire started from a controlled burn that escaped partly due to communication problems.

The lab and the town of Los Alamos lie on the border between growth patterns. To the east is lower elevation with prickly pear cactus, grass clumps, and light pinon and juniper growth, and to the west is higher elevation with ponderosa pine forests and streams that run at least in the spring.

Like many forests through the 20th century, the forest around Los Alamos became thicker and thicker as forest fires were prevented rather than controlled. But some agencies were recognizing the dangers and trying to thin the forest. There was criticism in 2000 of the controlled burn that started the Cerro Grande fire because it was such a dry time to be starting any fire. But as the facts came out, people learned the fire was deliberately planned for a very dry time so that fuel in the area would burn well, controlling future fires for the long term.

Most of the town has good fire lines (streets) that normally would be good protection from forest fire. The houses that burned in 2000 were mostly houses around the western edges that in many cases were literally surrounded by trees. But with strong winds carrying heat and burning materials, and water pressure lost at a critical point of the fire, there were also many houses well into town that were completely destroyed.

Many scenic mountain cabins are more at risk than a lot of the houses that burned in Los Alamos. Lessons from Los Alamos can be helpful to those who live in fire country.

Ten years after one fire, one year before another

Evacuating from a wildfire

If things are drying out, be prepared! There are many things you can do long before an evacuation that will make evacuating much easier on you.

Wildfire evacuation - the year before

If you live in fire country, watch as conditions change:

Paying attention to what is happening in the nature around you may alert you to what's going on long before anybody mentions fire season.

Wildfire evacuation - as the weather warms

Pay attention to local announcements of fire conditions, and take them seriously. (If it gets to be the Fourth of July, substitute water games for fireworks!)

Wildfire evacuation - as you're seeing and smelling smoke

You may have just hours left, or it could be days. Stay alert while you wait.

Why to evacuate from a wildfire

As the Cerro Grande fire threatened In 2000, I thought if I lived in Los Alamos, I'd want to stay and fight the fire. But I changed my mind after I heard what a fire threatening houses is like.

When you hear your area is being evacuated:

The evacuation - on your way out

Drive carefully. People are already scared; don't add accidents to the traffic jam. Keep calm and help others around you keep calm; depending on your roads, you may even have to drive toward the fire for a while to get away from it. Many small towns in forested areas have the same problems as Los Alamos: limited exits due to local terrain, and a major route for traffic crossing the main exit route.

It helped a lot in Los Alamos that the Lab was closed; otherwise half the people would have been crossing traffic, heading back into the neighborhoods to join their families. (You don't want to be picking up two kids from different schools and a spouse from work while everyone else is already leaving!) It also eased traffic to have the neighborhoods closest to the fire evacuated days before the others.

Even so, the last people leaving in 2000 were seeing flames coming over the ridge, and some people drove toward the fire (in slow traffic!) a long way in order to get to the exit road. The last people evacuated only a few hours before the first houses burned to the ground.

The wait to return is going to be hard; pick a place to stay that is as comfortable as possible, whether with friends or family, or at a hotel. It might be a good time for a mini-vacation, to keep your mind off things you have no control over anyway. On the other hand, the closer you stay the easier it is to get the latest news (a fire threatening Los Alamos that gets constant news updates in Santa Fe, might be barely mentioned in Denver.)

In 2000, blogs were still "weblogs", but in 2011 the combination of the local radio station's Facebook page, other local news sites, firefighting websites, county and state government websites, and webcams allowed former residents of Los Alamos to follow the fire almost minute-to-minute from across the country and the world. (From another state, I got to watch as the fire crept up the back side of the Los Alamos ski-hill...until the webcam went black.)

Another consideration for where to stay; if you have something important in the mail, the Post Office may find a way to work with evacuees nearby. In both fires, they set up temporary mail centers near Los Alamos.

Remember your car is filled with valuables. Pay attention to where you park it.

Returning after an evacuation

Most likely you will still have a house to go back to. You'll want to get back as soon as possible - so will everybody else, especially those who lost their house and want to see if anything is left. Try to be patient. If the fire did get close your house may have smoke and ash in it. You'll probably have food to throw out, especially if power was off, and if so, so will everybody else. You may have to get creative to find a place to put spoiled food where you don't have to deal with the smell but where it won't attract animals. 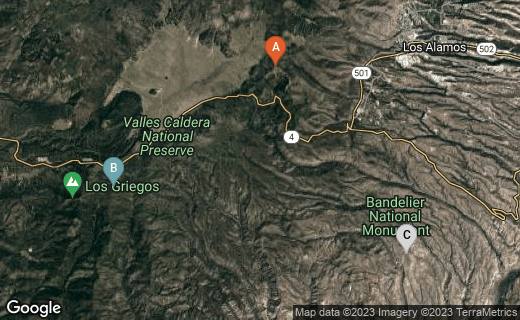 Area where the 2000 fire started

Area where the 2011 fire started. The direction the fire went toward Los Alamos was similar both times, directed by wind and forest.

Bandelier was affected by past fires in the area, such as the La Mesa fire in the late 1970s, but the Las Conchas fire devastated much of Bandelier.