I've used this product for over 30 years now. Personal experience is all that I have to go on.

Why I Use A Crystal Deodorant Stone

Why does it always come down to the simple things that work? I've not used commercial deodorant or antiperspirant for over 25 years. I've put it to the test and swear by it. Even during the summer, when I do heavy work in the hot sun and sweat buckets, I don't exude the bad malodorous body odour. I have even skipped a day with no odoriferous results.

The health risks of using aluminum-based chemical deodorants have been a proven contributor to many diseases, so why would you willingly poison yourself when there is such an easy solution.

Let me recommend this amazing crystal deodorant stone to you and stay fresh naturally.

Clean sweat does not stink. The bacteria on your skin are what produce the odour that is attributed to stale sweat. Allowing that bacteria to grow provides the basis for creating body odour. And your smell is distinct to your bacteria.

Bacteria grow in warm moist areas, so the armpits, loaded with sweat glands, are a prime location. Even more so if one uses the conventional aluminum-based anti-antiperspirants, these products control sweating by clogging and restricting the pores. The clogged pores are the perfect environment for the bacteria. So much so that antiperspirants also contain perfumes and deodorants as well.

That's typical modern thinking. Solve a problem by throwing more chemicals at it. I don't like that mentality, but there is money involved. Create a product that solves one problem only to make another problem, which needs another product to solve - and so on and so on.

I came across the first crystal deodorant stone at a flea market trade show. That was twenty-five years ago, and I am still using the stuff. It is a natural alum based mineral crystal that kills the bacteria living on your skin on contact. Kill the bacteria, get rid of the odour. 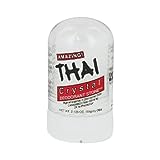 THAI 100% Natural Crystal Deodorant Stick, Mini Travel Size (2.125 Ounces)
It also comes in a traditional roll-on type package but don't be fooled into buying it this way. The extra packaging is just a gimmick and the stone will soon enough fall out of the package. The only time I consider this format is when traveling on an airline .... customs people are so curious.
Buy Now

The Science That Kills

I love that term. "considered safe up to those levels". That means it is not safe over those levels? Who is preventing some over enthusiastic teen from over applying his pit stick? Besides who reads the labels on these things anyways.

There is fears and suggestions that high levels aluminum concentrations in the body is attributed to some diseases like Alzheimer's and breast cancer. The word is still out on that. I, for one, don't plan on testing the theory.

"There is no adequate evidence that exposure to aluminium in antiperspirants leads to progressive dementia and Alzheimer's disease."

Ted S. Gansler, MD, MBA, the director of medical content for the American Cancer Society, stated "There is no convincing evidence that antiperspirant or deodorant use increases cancer risk"

How I Use It

Using the crystal deodorant stone is simple. All you do is wet the stone and wipe over the armpit area. It doesn't take much. Remember to rinse the stone off after you finish. One three once stone lasts about three months, so it is much cheaper than regular deodorant as well.

Now, how simple is that?

In all fairness, I must caution you. It takes a while to become active. It's basic biology that you have to contend with sometimes. The stone is useful right away, but if you've been using antiperspirant for any length of time, your pores will be clogged. It takes a couple of weeks to a month of continual use before you'll feel completely free. During that time, you'll sweat more because your body is used to sweating profusely because of the blocked pores. Gradually the sweating will lessen, and the odour will be gone.

After three months of regular use, your body will have settled in. Sweating will happen but is not odoriferous and will soon reduce in quantity. Your body regains its efficiency and requires less sweat to cool itself. You will find you can even skip a day of using the deodorant stone without ill effects.

I like the natural crystal form, but the stone comes formed and packaged in a roll-on type package. In my opinion, it is a waste of both packaging and money. We bought one once because our regular supply of the stone was lacking. The price was three times what I usually paid, and the stone was smaller. It also lasted in the container a few weeks before it eroded enough from regular use to fall right out of the expensive packaging. Don't waste your money on the prepackaged stone.

The biggest cause of failure when using the stone is not giving it the time in the beginning.

Thai Deodorant Stone Crystal Stone in Basket
This is the first stone deodorant I came across and still one of the best. The oval hand-formed crystal usually lasts the longest and it fits the hand better. They also come with great little designer holders.
Buy Now

Other Uses Of the Crystal Deodorant Stone

How To Buy Crystal Deodorant Stones

Buy from a reputable company. Some I have tried are better than others in their quality control. The original Thai stone was hand packed and seemed to be the best of the companies I've tried, so if you buy online, I will buy those.

Find a local dealer. I like to inspect the stones before I purchase it personally. The clearer the crystal, the easier it is to see if any internal cracks would cause the stone to split before you have used it a full three months. Pick clear over cloudy.

Crystal Deodorant Comments - Give me your thoughts.