A Bonfire of Darkness

A look at the origins of Bonfire Night and its modern relevance.

Once again it's bonfire night, rockets are whizzing through the air screaming as they go and fires are blazing, crackling hypnotically in the darkness. Children from all over the UK are having a good time burning effigies of Guy Fawkes whilst watching sparklers, Catherine wheels and roman candles. Anyone would think that the 5th of November was a celebration of Guy Fawkes himself, a historical traitor who has now been immortalised in this day of joy and wonder.

Bonfire night is technically the celebration of the thwarting of 'The Gunpowder Plot'. The last Tudor monarch, daughter of Henry VIII, Queen Elizabeth I decided early on in her reign to support the English Protestant Church and become their Supreme Governor. In 1570 the Pope Pius V promptly excommunicated her but his successor went one step further, Pope Gregory XIII attempted to order her assassination in 1580. Over the years of her reign various Catholic plots challenged her aiming to replace her with a Catholic monarch and return England to its 'old religion'. Elizabeth grew less and less tolerant of the Catholics along with her religious followers and persecuted them making Catholicism effectively illegal. In 1559 she introduced 12p fines for not attending church and the Catholic clergy who refused to take the Oath of Supremacy lost their office. Later in her reign she introduced a law where the attendance of mass was punishable by an extremely high fine and the saying or arranging of mass to be said carried the death penalty. In 1581 the fine for not attending church was raised to £20, a phenomenally high amount considering the average knight earned approximately £50 a year. The establishment of Elizabeth I later became the Church of England but left in its wake a mob of disgruntled Catholics.

When Elizabeth I died the Catholics of Britain were overjoyed and hopeful that the new King, James I of England, would bring with him a fresh tolerance to his reign. This did not happen quite as planned. James was only very slightly more tolerant than Elizabeth until the third attempt on his life by Catholic religious conspirators. He then introduced an Act requiring any citizen to take an Oath of Allegiance, denying the pope's authority over the monarch. To Catholics this was simply heretical.

The Gunpowder plot was one of these attempts on the life of James I by Catholic terrorists. Thirteen Catholic restorationists came together and planned in detail to blow up the Houses of Parliament effectively killing the King and all the Members of Parliament, the Protestant aristocracy, in attendance rendering England with no internal leadership. Robert Catesby was the mastermind behind this plot with his fellow conspirators; Thomas Winter , Robert Winter, John Wright, Christopher Wright, Robert Keyes, Thomas Percy, John Grant, Ambrose Rokewood, Sir Everard Digby, Francis Tresham and Thomas Bates. The final conspirator was Guy Fawkes, a military man with 10 years experience fighting with the Spanish against the Dutch, a master of explosives and tactics.

The plan was to put barrels of explosives underneath the House of Lords which they had rented and detonate them on the 5th of November, the State opening of Parliament. Guy Fawkes, with his military experience, was to take the key role of detonator whilst his comrades headed north to inspire an uprising after the King was dead. However, an anonymous letter was sent to Lord Monteagle on Friday 26th October which warned him to stay out of Parliament on the 5th. Strangely the conspirators knew about the letter and still resolved to carry on with their treason. The King, having seen the letter, ordered a thorough search of the Parliament and the cellars beneath it. Guy Fawkes was caught in the act, trying to leave the cellar full with barrels of gunpowder and was promptly arrested. The Catholic terrorists were tried on January 27 1606 and executed.

So what is Bonfire night? It marks the downfall of the Gunpowder Plot of 5 November 1605, we celebrate the fact that Guy Fawkes was caught and burn his image on a bonfire as would have happened to James I had the plot succeeded. This is a public holiday with a very dark origin and a somewhat confusing morality. In all the fun and frivolity the seriousness of treason and terrorism is forgotten and the reason why this holiday exists. We look at 9/11 with fear and sadness at the lives lost and hatred towards the evildoers who orchestrated it. We look at war such as Afghanistan and Iraq, a supposed tale of glory, watching the death tolls involved with disgust and pain. So why is we look at bonfire night and smile? Perhaps we are right to be proud of the fact that a terrorist act was stopped and the culprits caught, but let us not forget that terrorism of any type and any degree is evil, inhumane and overall despicable. Let it be a lesson to us all that from anywhere external or internal an attack may come and devastate our country. Most of all let it unite us against this darkness and be a lesson to those who wish to do harm. 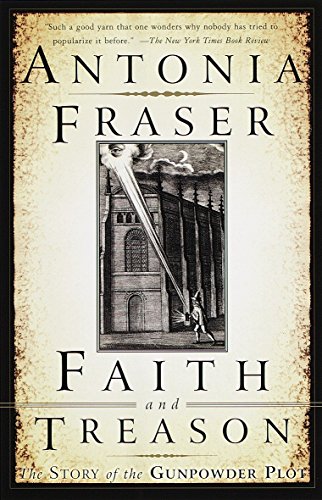 Faith and Treason: The Story of the Gunpowder Plot
Buy Now