What would be the perfect gift for the woman in your life? Something delicate, beautiful and personal? A gift that is small enough to send by post? Something she can treasure for life?The first of a growing collection or a much appreciated addition to the fold? An object with history, the romance of France and something that will appreciate in value over time? A valuable container for an even more precious gift? A little box that says, I love you?

Limoges boxes are charming objects made from hand painted porcelain in the French city of Limoges. Small, exquisite and individual, you can choose a box suited to every taste and for every occasion. These hand decorated boxes have that personal, unique quality so hard to find and so much appreciated. The perfect gift.

We are lucky enough to live in Limousin at Les Trois Chenes where we run a guest house and self-catering holiday cottage or gite. Just fifty minutes from Limoges, we're perfectly placed to pick up the bargains.

Limoges porcelain is famed not only for its beauty, but for its durability, and this hard paste porcelain was imported from china where the exact process of manufacture was a closely guarded secret. The key ingredient was Kaolin, a type of clay. When a deposit of very pure kaolin was found near Saint Yrieix-la-Perche, (about 30 km away from Limoges), in 1766 the region enjoyed a golden age of porcelain manufacture.

The hard-paste porcelain requiring this type of extra-fine clay (as opposed to the inferior ‘soft-paste), was first made in France in the 1760’s, at the royal factory in Sèvres. Limoges, however, had produced enamels since the XIIc. And because of the established enamel works, it was easy to build up china works here, especially as the oak and chestnut woodlands and forests of the area guaranteed a ready supply of fuel.

Read more of the history and background of Porcelain manufacture Limoges: Princess of Porcelain 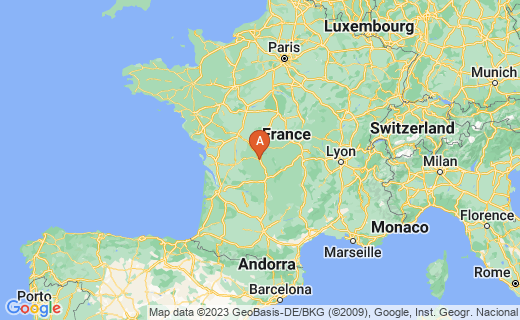 Limoges boxes were originally used as snuff boxes, (Tabatiere in French) or as containers for sweets, (bonbonnieres) or scent. They also served as cane heads and small carrying cases, (etuis). They were originally made at Sevres, along with the production of false teeth!

Among these the snuff box became an immediate success. A century earlier a diplomat called Nicot introduced tobacco in France. At that time tobacco was snuffed (sniffed) not smoked. The snuff was wrapped in small linen bags and placed in leather pouches or silver, gold, wooden and ivory boxes. All of these materials were difficult to decorate or very expensive, but porcelain was so much more adaptable and soon thousands of different shapes of Tabatieres were being produced. The boxes were assembled with metal settings made of brass, gold or silver. However, all good things must come to an end, and during the revolution soldiers began to smoke tobacco rather than to sniff it, and slowly but surely the demand for Limoges boxes declined.

In time these little china boxes were lost or destroyed, and so became rare and much sought after. It was due to the high demand from antique collectors that interest in the manufacture of the boxes was rekindled. Some producers consulted historians and carried out research in museums and libraries, locating original moulds where possible. Where they could not be found, they were reconstructed from documentary evidence. Meanwhile, the original boxes that did survive carry a very high value, fetching up to a million French Francs at auction.

Collecting Limoges boxes today can become a fascinating and enduring interest, and a good collection will always be an excellent investment. Why not take a trip to Limoges and see what there is to offer at first hand?

Today there are more than 36 studios, (ateliers), in the city of Limoges that design and make these boxes. To be classed as 'Limoges Boxes' they must be made in Limoges and from Limoges kaolin’. You must be on your guard for cheap and poor quality imitations. True Limoges boxes from the best factories and ateliers will be charming in design, beautifully crafted, strong and translucent; they are made by highly skilled artists who are trained for years.

What distinguishes a ‘Limoges Box’?

In addition to the qualities listed above:

For more information about collecting have a look at these sites:
LimogesBoxCollector.com

Limoges is a wonderful and surprising city

A film about the Porcelain Industry set in Limoges

Les Destinées
'Les Destinees Sentimentales' is an Emmanuelle Beart film about Limoges Porcelain industry and set near Limoges. A great insight into the history of the porcelain business in this area of France
Buy Now

Other articles about Limoges Porcelain and the Limousin region