Feast of Our Lady of Guadalupe

Juan Diego's Encounter with the Mother of Jesus

In the calendar of feast days of the Catholic Church, December 12th is the feast of Our Lady of Guadalupe which is also celebrated as a major religious holiday in Mexico.

This date is the anniversary of the Mexican Indian Juan Diego's second encounter with the Virgin Mary on Tepeyac Hill outside Mexico City in 1531.

The Virgin Mary had first appeared to him three days earlier on December 9th in the same spot. During this first encounter she asked him to go to Bishop Juan de Zumarraga and request that a church be built on the spot where she appeared before him.

Juan had made his way to the bishop and, with persistence, finally managed to obtain an audience with the bishop. However, the bishop demanded a sign to authenticate the request and, on December 12th, the Virgin Mary again appeared before Juan Diego in the same spot as he was making his way to find a priest to attend to his uncle who was seriously ill.

When told of the bishop's request for a sign, Mary pointed to a nearby rose bush which, despite the cold winter season, was in full bloom.

Juan Diego proceeded to gather an armful of roses and, wrapping them in his cloak, hurried off to see the bishop. After being ushered in to see the bishop, Juan Diego opened his cloak and presented the roses which, given the season, would have been a sufficient sign.

However, when he emptied the roses from his cloak, there appeared, imprinted on the inside of his cloak an exact image of the Virgin as she had appeared to him. This proved more than enough to convince Bishop Juan de Zumarraga that Juan Diego's message was from the Virgin Mary herself.

A Significant Event in Mexican History

The appearance of the Virgin Mary was significant in a number of ways. It occurred a mere ten years after Hernán Cortés led his Conquistadors and Indian allies to victory over the Aztec Empire thereby transferring control of Mexico from the Aztec Emperor and his government to that of the King of Spain.

Two years after the victory of Cortés and his army the first missionaries arrived and began their attempts to convert the native population to Catholicism. When she spoke to Juan Diego it was in the Nahuatl language spoken by the natives of that area an not in Spanish.

Finally, when she appeared before Juan Diego it was in the form of a dark skinned woman, like the natives of the area rather than in the image of a European woman and this gave rise to her being referred to as La Virgen Morena (the Dark Virgin). She was definitely identifying with the indigenous peoples of Mexico and they responded with huge numbers of conversions over the next few years.

Juan Diego and his wife, had been among the first to convert to Catholicism when the Spanish missionaries arrived in Mexico.

Juan Diego's native name was Cuauhtlatoatzin, but he changed it to Juan Diego and his wife changed hers to Maria Lucia when they converted to Christianity.

While Juan Diego described himself as a macehualli' or poor Indian in terms of his social and economic class within the Aztec Empire, he did own a house and small piece of land and supported himself and his wife by working in the fields and other odd jobs. Maria Lucia died shortly after hers and Juan's conversion as he was a widower at the time of his encounter with Mary.

Contemporary accounts describe Juan Diego as being a very devout man both before and after his conversion to Catholicism. Following his encounter with Mary and after the church was built on the mountain, he requested and was given a room next to the chapel were he spent the rest of his life.

Juan Diego was 57 years old at the time of his encounter with Mary and 74 years old on May 30, 1548 when he died. On July 31, 2002 Pope John Paul II oversaw the canonization of Juan Diego at a Mass in the Basilica of Guadalupe in Mexico City thereby officially recognizing him as Saint Juan Diego in the Catholic Church. The is celebrated on December 9th, the day he first encountered Mary.

Today a modern Basilica (built in 1976) rests on the site where Juan Diego had his encounter with the Virgin Mary and where she requested that a church be built.

This Basilica is the third to sit on this spot with the first one being a small church that was ordered built by Bishop Juan de Zumarraga and the second, larger structure, built in 1709 to replace the first church.

While time and the need to accommodate ever increasing numbers of pilgrims has caused the previous churches to be replaced, Juan Diego's cloak, with its image of Mary is as fresh as when Bishop de Zumarraga first laid eyes on it, continues to reside in the church.

Why did Mary Refer to Herself as "Lady of Guadalupe"?

A lingering question remains and that is why did the Virgin Mary speak to Juan Diego in his native Nahuatl yet, when speaking with him refer to herself using the Spanish name, Guadalupe?

One theory is that she used the Nahuatl word coatlaxopeuh which translates to who crushes the serpent and, when pronounced, sounds like the Spanish word Guadalupe.

Thus in speaking to Juan Diego in the Nahuatl language she identified herself as coatlaxopeuh which means Our Lady who crushes the serpent (the Aztec god Quetzalcoatl was pictured as a serpent by the Aztecs). However, like other native words, it soon evolved into a Spanish word that sounded similar to the original Nahuatl word.

Basilica of Our Lady of Guadalupe outside Mexico City 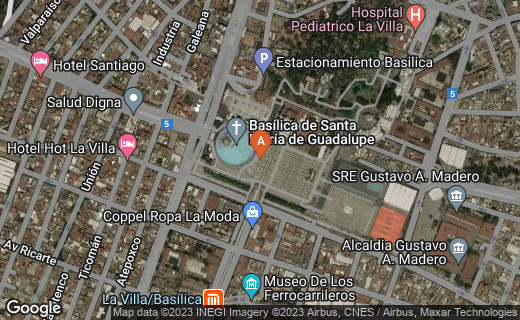 Basilica of Our Lady of Guadalupe on Tepeyac Hill outside of Mexico City. Since 1999 this has been the most visited Catholic Shrine in the world. 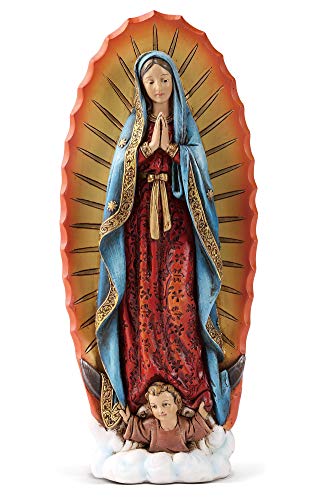 Links to Some of My Other December Holiday Hubs