Independence Day is right around the corner, and what better way to celebrate than with freedom and patriotic quotes that define us as a nation. If these quotes don’t get you into a patriotic spirit, nothing will.

“We hold these truths to be self-evident, that all men are created equal, that they are endowed by their Creator, by certain unalienable Rights, that among these are Life, Liberty and the pursuit of Happiness” – Declaration of Independence

“Under the law of nature, all men are born free, every one comes into the world with a right to his own person…This is what is called personal liberty, and is given him by the Author.” – Thomas Jefferson

“This, then, is the state of the union: free and restless, growing and full of hope. So it was in the beginning. So it shall always be, while God is willing, and we are strong enough to keep the faith.” – Lyndon B. Johnson

“What is the essence of America? Finding and maintaining that perfect, delicate balance between freedom “to” and freedom “from.” – Marilyn vos Savant

“The preservation of the sacred fire of liberty, and the destiny of the republican model of government, are justly considered deeply, perhaps as finally, staked on the experiment entrusted to the hands of the American people.” – George Washington

“Let every nation know, whether it wish us well or ill, we shall pay any price, bear any burden, meet any hardship, support any friend, oppose any foe, to assure the survival and success of liberty.” – John Fitzgerald Kennedy 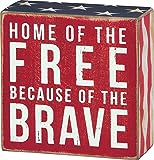 “The winds that blow through the wide sky in these mounts, the winds that sweep from Canada to Mexico, from the Pacific to the Atlantic, have always blown on free men.” – Franklin D. Roosevelt

“This nation will remain the land of the free only so long as it is the home of the brave.” – Elmer Davis

“America is much more than a geographical fact. It is a political and moral fact – the first community in which men set out in principle to institutionalize freedom, responsible government, and human equality.” – Adlai Stevenson

“The liberties of our country, the freedom of our civil Constitution, are worth defending at all hazards; and it is our duty to defend them against all attacks. We have received them as a fair inheritance from our worthy ancestors: they purchased them for us with toil and danger and expense of treasure and blood, and transmitted them to us with care and diligence. It will bring an everlasting mark of infamy on the present generation, enlightened as it is, if we should suffer them to be wrested from us by violence without a struggle, or to be cheated out of them by the artifices of false and designing men.” – Samuel Adams

“I only regret that I have but one life to lose for my country.” – Nathan Hale

“Patriotism is your conviction that this country is superior to all other countries because you were born in it.” – George Bernard Shaw

“Peace, commerce, and honest friendship with all nations –entangling alliances with none.” – Thomas Jefferson

“Fear is the foundation of most governments.” – John Adams

“I consider trial by jury as the only anchor ever yet imagined by man, by which a government can be held to the principles of its constitution.” – Thomas Jefferson

“They that can give up essential liberty to obtain a little temporary safety deserve neither liberty nor safety.” – Benjamin Franklin

“If a man does not keep pace with his companions, perhaps it is because he hears a different drummer. Let him step to the music which he hears, however measured or far away” – Thoreau

“True patriotism hates injustice in its own land more than anywhere else.” – Clarence Darrow

“A man’s country is not a certain area of land, of mountains, rivers, and woods, but it is a principle; and patriotism is loyalty to that principle.” – George Curtis

“I know not what course others may take; but as for me, give me liberty or give me death!” – Patrick Henry

“In the beginning of a change, the patriot is a scarce man, brave, hated, and scorned. When his cause succeeds however, the timid join him, for then it costs nothing to be a patriot.” – Mark Twain

On this Independence Day, let us remember the sacrifices that have been made for our freedom. Let us also remember that America is not defined by the politicians who run it, but the people who love it. These freedom and patriotic quotes remind us that patriotism in America does not mean following blindly, but rather it means holding to the ideals that gave birth to this great nation.

My Favorite Collection of Quotes That Will Warm Your Heart