Hallmark Hall of Fame has created heartwarming Christmas movies for all to enjoy and to pass on to our special friends and family. There is no better way this Christmas season than to make time to spend with family members and friends by watching these wonderful Christmas movies.

This year's Hallmark Hall of Fame 2016 movie is about a woman who dies unexpectedly, and then suddenly in training to be a Christmas Angel in Heaven. She is absolutely not the best recruit ever and is assigned a very difficult, challenging case. She is forced to help get to the bottom of his problems and bring a solution to them. Then something changes in her. She starts to discover the meaning of Christmas and a lot of surprises take place.

This is Hallmark's Hall of Fame movie shown in 2015 Christmas. It is about a young woman, Lindsay who has to make a very tough decision that could change her life forever. She receives help from a mysterious person to show her the advantages and disadvantages of either choice. The main stars are Eloise Mumford, Michael Stahl-David, William Shatner and Christopher Lloyd.

One Christmas Eve is another Hallmark of Fame treasured holiday movies. It was premiered on November 30, 2014.

It is about a single mother who goes through a series of events on Christmas Eve. She wanted to make this Christmas really special for her children, but things eventually go wrong. It is such a family movie, filled with adventure to warm your heart this season and keeps you entertained. There is not a dull moment in this movie.

Christmas in Conway is another great Hallmark Hall of Fame movie. A woman has a short time to live and wants to spend it in her home located at Conway, SC. Her husband is known as the grouch to the entire town. But he wants to do something extra special for her. He goes to great lengths to give her an unforgettable gift that the town will always remember. The things he did to get this amazing gift is quite amusing and very funny, entertaining to watch. This movie about love, sacrifice, forgiveness and reconciliation.

November Christmas premiered on CBS. It is an amazing, moving story of a family who has a hard, difficult time dealing with their daughter's illness. The community does their best to help a family cope with this traumatic event. The father loved his little girl so much, he planned to push up the holidays earlier. This is a really beautiful hallmark movie that you will enjoy.

A SEASON OF MIRACLES

When a young woman's niece and nephew will have to go into the foster care after her sister is hospitalized as a result of another overdose. She took the car and fled with her sister's children until they land in a small town just before Christmas. Many good things take place as a result of being in this town and lots of love and good deeds. This is an absolute heartwarming film for families and children.

This is a great movie for children, families and just about anyone. It is about The McCray family is expecting to have a great Christmas on their Kansas farm. Their 20 year old developmentally challenged son got hold of the news that the local animal shelter is looking for families to foster a pet for the holidays. Todd set his heart and mind to persuade his family and their small town community to take part in his unique event. Let's take a look at what took place as a result of this brave act.

Amazon has these three marvelous movies in a DVD Christmas collection that you can own and watch with friends, family members and loved ones. These also make great gifts for anyone. 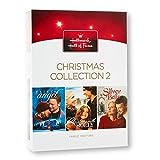 This movie is an amazing family holiday drama. The movie is about a very successful attorney in Los Angeles. His name is Terry. Terry after his graduation, left his home in Maine because of an argument with his father who did not have a warm heart. Terry returned home after he gets a phone call stating his father is very sick and was in the hospital. When he returned home, he learned of his father's death. He went back to the house where he grew up and was only planned to take care of the cottage estate. Terry was reunited with people from his past and memories keep coming back. There are many valuable life lessons from this heartwarming movie.

This movie is about a coffee shop owner who's become guardian to his six-year-old niece. Mark is actually the youngest uncle and is struggling to connect with Holly, who has not spoken since her mother died three months ago. Her school administrator is very concerned about Holly and suggested to Mark that Holly needs psychological counseling. He temporarily brings Holly to live with her other 2 uncles, Alex and Sean and they all play a part in the healing process and gave her a family. This is a beautiful Hallmark Movie that is based on family, drama and romance.

Silver Bells is about a widower has not experienced joy since his wife passing. When family tree farm business brings him and his two children from Canada to New York City, his all-work attitude causes problems. His children's top priority is to help out on the family tree farm. When Danny is sixteen, he ran away and pursued his photography dream. He comes across a museum employee, Catherine who helped him and gave him photography assignments. When the father returned to New York a year later to sell his Christmas trees, he and Catherine cross paths and a crisis brought them together. This is a wonderful story of hope.

Amazon has these amazing movies in a DVD Christmas collection that you can own and give as gifts. .