John Muir was born in Scotland on April 21, 1838 and moved with his family to Wisconsin eleven years later. He studied at the University of Wisconsin various subjects including geology, botany and philosophy.After a brief episode of working in a carriage factory and being nearly blinded in one eye for life, he decided to devote his life to studying God's creation by taking a thousand-mile walk from Kentucky to Georgia.In Florida he came down with yellow fever and after his recovery, he left for the high Sierra of California to work as a shepherd. But his botanic and geologic interests led him to discoveries including a remnant glacier in the high mountains of California. He theorized that glaciers formed Yosemite Valley, not some vast series of earthquakes that hollowed out a valley as Josiah Whitney (State Geologist) had proclaimed.

He wrote a series of essays on the geology of the Sierra Nevada Mountains for the Overland Monthly which began his literary and conservationist career. In his fifties, as a married man, he began writing books starting off with The Mountains of California.(1894) and four more including Travels in Alaska (1916) that he edited for publication on his deathbed in 1914. During his lifetime he founded the Sierra Club in 1892 and was a founding father for Yosemite National Park and Grand Canyon National Park. He befriended President Theodore Roosevelt by camping with him in Yosemite Valley in 1903. As a result of this "bully" experience and his correspondence with Muir, President Roosevelt became the strongest conservationist President in U.S. history..It is for no small reason that John Muir's birthday has become Earth Day and that his image is on the new California quarter.

Ralph Waldo Emerson wrote that the Transcendentalist "believes in miracle, in the perpetual openness of the human mind to a new influx of light and power; he believes in inspiration, and in ecstasy. He wishes that the spiritual principle should be suffered to demonstrate itself to the end...thus the spiritual measure of inspiration is the depth of thought." John Muir, who read, met, and appreciated Emerson, certainly followed his lead in the wilds of California, Arizona, Wyoming, Washington and Alaska. Muir's transcendental depth of thought surfaced with an overriding and recurring observation: in the wilderness there is always harmonious unity. Sometimes it requires more than five senses to detect this unity, but it is there whether or not we sense it, as Native Americans believe to this day.

Muir saw unity in nature even in devastating or cataclysmic events such as volcanoes and earthquakes because through destruction comes re-creation, and for this reason, he considered them to be "joyous events." He describes earthquake-formed talus slopes as follows: "If for a moment you are inclined to regard these taluses as mere draggled, chaotic dumps, climb to the top of one of them, tie your mountain shoes firmly over the instep, and with braced nerves run down without any haggling, puttering hesitation, boldly jumping from boulder to boulder with even speed. You will then find your feet playing a tune, and quickly discover the music and poetry of rockpiles--a fine lesson; and all Nature's wildness tells the same song. Storms of every sort, torrents, earthquakes, cataclysms, 'convulsions of nature,' etc., however mysterious and lawless at first sight they may seem, are only harmonious notes in the song of creation, varied expressions of God's love."

In order to detect inner harmonies of nature, Muir went far beyond Emerson's transcendentalism (studied at the University of Wisconsin) by denying his body as much as possible. He agreed with Emerson that "Every natural fact is a symbol of some spiritual fact. Every appearance in nature corresponds to some state of mind, and that state of mind can only be described by presenting the natural appearance as its picture." (See Emerson's essay "The Transcendentalist"). But in order to detect spiritual facts, Muir felt that his body itself must be overcome because it interfered with transcendental detection. In My First Summer in the Sierra (1911) Muir describes what he did to gain a closer view of the immense Yosemie Falls:

Out of Body Experience

"But I found that there was yet another small brow over which I could not see, and which appeared to be too steep for mortal feet. Scanning it keenly, I discovered a narrow shelf about three inches wide on the very brink, just wide enough for a rest for one's heels. But there seemed to be no way of reaching it over so steep a brow. At length, after careful scrutiny of the surface, I found an irregular edge of a flake of the rock some distance back from the margin of the torrent. If I was to get down to the brink at all that rough edge, which might offer slight finger-holds, was the only way. But the slope beside it looked dangerously smooth and steep, and the swift roaring flood beneath, overhead, and beside me was very nerve-trying. I therefore concluded not to venture farther, but did nevertheless. Tufts of artemisia (sagebrush) were growing in clefts of rock near by, and I filled my mouth with bitter leaves, hoping they might help to prevent giddiness."

By denying his body as much as possible, Muir was able to overcome human needs, he believed, tend to hamper man's vision in nature. His first jottings describing the brink of Yosemite Falls are characterized by such words in his journal as "terrible power," "infuriate waters," "screaming," and "surging." Then Muir corrects himself: "But I speak after the manner of men, for there was no look nor syllable of fury among all songs and gestures of these living waters. No thought of war, no complaining discord, not the faintest breath of confusion. One stupendous unit of light and song, perfect and harmonious as any in heaven." Here is Muitr's transcendental depth of thought!

Have you ever read any of John Muir's books? 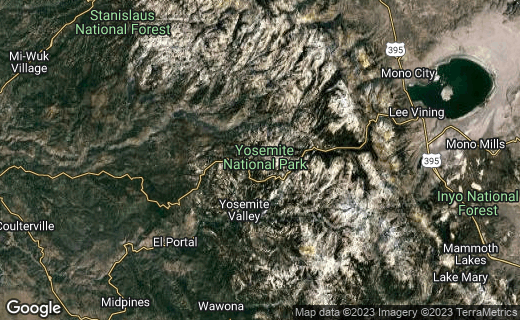