History of Chocolate and Valentine's Day

Just as the crocus pushing its way up through the melting snow heralds the start of the transition from winter to Spring, the emergence of chocolate hearts wrapped in bright red foil and small, heart shaped boxes of chocolate candy on store shelves announces the end of the Christmas season and beginning of Valentine's Day preparations.

Not that chocolate candy is sold only on Valentine's Day. It is popular treat year round as well as a popular gift on other days such as Christmas, Easter and Mother's Day.

Women Have an Affinity for Chocolate

But the demographics of chocolate candy sales change drastically in the days leading up to Valentine's Day.

While men are major chocolate candy purchasers for only a few days out of the year the dollar value of these purchases come to about $1 billion nationwide. This is in addition to their Valentine's Day purchases of flowers and jewelry for the ladies in their lives.

While chocolate, including chocolate candy, is liked by most people, women tend to have a somewhat greater affinity for it than men. While not a true aphrodisiac, consuming chocolate does produce a pleasant sensation and men have long known that in dealing with women gifts of chocolate are always a safe bet.

Chocolate is given as a token of a man's love or as a peace offering when he as done something to anger his love. It is also an excellent hostess gift that can be picked up on the way to a dinner party.

But chocolate, while it has a long history as a food, is a relative newcomer in the field of courtship and romance.

A Short History of Chocolate

In addition to the gold and silver of the Aztecs and Incas, Spanish explorers in the New World also discovered a number of new foods – potatoes which became a staple of the peasantry in many parts of the Old World.

Tomatoes which became a staple of Spanish and Italian cooking (and later American when Italian immigrants brought tomatoes with them to the U.S.) and corn. For seasoning and flavoring there were vanilla and chili peppers. Then there was cacao or cocoa from which chocolate is derived. Archaeological records indicate that the Mayans of Central America were consuming cocoa as far back as 600 B.C. or earlier.

When Cortés conquered the Aztecs he was introduced to cocoa by the Emperor. But the cocoa consumed by the Mayans and later the Aztecs was not like our modern chocolate. Cocoa itself is bitter tasting and the Mayans and Aztecs consumed it as a drink in which dried cocoa was mixed with water and possibly some chili peppers.

When cocoa reached Spain, the Spanish began experimenting by mixing cocoa with sugar and vanilla to make a sweeter drink. The result was a hot chocolate type of drink which soon became popular among the upper classes, who were the only ones who could afford it, in Europe.

In addition to hot chocolate, cocoa was also added bread and other baked goods to add flavor. By the first half of the eighteenth century cocoa production had increased and the price had fallen to the point where it became affordable to the general population of Europe and the European colonies in the New World.

In 1828 Conrad van Houton of Holland invented a process to make a refined cocoa powder which increased the output of the usable powder from a given crop of cocoa beans thereby further lowering the price of chocolate. People also began mixing cocoa with warm milk which became known as hot coca while the traditional mixture of cocoa and hot water continued to be known as hot chocolate.

Another big advance came in 1876 when a Swiss chocolate seller, Daniel Peter, invented a process for making candy out of milk chocolate. A little Swiss company named Nestlé picked up the idea and to become the global chocolate producer we know today. 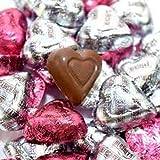