Who Started the Christmas Cards Tradition?

When you check your mailbox during the holiday season, most of us are likely to find Christmas cards from friends, family or colleagues.

Hundreds of millions of people participate in the annual rite, resulting in about 1.8 billion greetings being sent every year. It's become such a part of our tradition, that many people may not even wonder how it began.

But there was a time when sending cards through the mail wasn't part of Christmas celebrations. So who started the Christmas cards tradition? 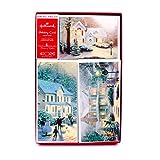 Sir Henry Cole was the British inventor and civil servant who produced the first commercial Christmas cards in 1843. Cole hired painter John Callcott Horsley to design the card and Horsley created a three-panel picture that was hand-colored on stiff paper.

The two side panels of the card showed acts of charity (the hungry receiving food and the poor being clothed), and the middle panel showed three generations of a family raising a toast above the greeting, "A Merry Christmas and a Happy New Year to You." The card was criticized by Puritans who were upset that a child was depicted sipping wine on the card, but the card was popular nonetheless. Over 2000 cards were sold for a shilling each.

After that, the idea caught on. Queen Victoria sent out the first "official" Christmas card from a head of state in the 1840s, and in 1875 Louis Prang became the first printer to publish Christmas cards in the United States. Christmas postage stamps were introduced later in the century, furthering the advancement of holiday mail.

Now the Christmas cards tradition is well-entrenched in our society. Individuals, businesses, and government officials all regularly send greeting cards during the holidays, and new technology has made it easy for people to create their own personalized greeting cards, buy cool Christmas cards with unusual shapes and uses, and send digital ecards online.

Thanks to Henry Cole, there's always something to look forward to in our mailboxes during the holidays.