Why I'm making this page about Unique Christmas Music

There are many beautiful Christmas songs of which most people are sadly unaware. There are also many funny or crazy Christmas songs, some of which most people are aware and some of which they are not. Thus, I decided to make this page to list some of the unique Christmas songs I know of. These will fall into two categories or genres. The beautiful ones will fall into the genre of American folk music, as that happens to my favorite genre of music and thus the one of which I am most familiar and feel to be the most beautiful. The second category or genre of unique Christmas songs which I have chose to include are the funny or crazy Christmas comedy songs. Of course these are a genre all to themselves. I hope you will take this opportunity to listen to some sample of each of these groups which I have listed from YouTube below. Then check out the albums I listed-- two folk albums and one comedy album. . Even if its now too late for Christmas this year, you could still order and you'll have them when next years season rolls around..

As you may know, I love American folk music, as, aside from it's meaningfulness, it seems to have a beauty uniquely all its own, and it is never more beautiful or meaningful than at Christmas. There are many beautiful Christmas folk songs, with both secular and sacred content. There are too many to list here, but take a listen to the six (6) I listed below and see if you don't agree. Then check out the two really exceptional albums I listed for sale:

Above: "The Deep Blue Sea" sing "The 7 Blessings of Mary." This is one of the songs which is on the set offered below, although it's sung slightly slower there.

Below: A Christmas folk classic: "Go Tell It On The Mountain." It's one of the songs which is on the set offered below, although the one directly below is sung somewhat faster. Every folksinger or group has their own inimical way of singing.

Below: Kluane T and family sing "Jehovah Hallelujah, The Lord Will Provide." This is also one of the songs which is on the set below, there sung by the three seegers.

--So, check out this beautiful album of American folk songs for Christmas: My personal recommendation:

The boxed set listed below is based on the famous book of the same name by folklorist, Ruth Crawford Seeger preformed by her children and their families. There are a total of 53 songs, including "stars in heaven," "Bright Morning Stars Are Rising," "Rise up shepherds and follow," "Go Tell It on the Mountain, " "Look Away to Bethlehem, " "Sing Hallelu,," "Breaking up Christmas," and the ones in the YouTube casuals above. Mike Seeger, Penny Seeger, Peggy Seeger, Sonya Cohen, Ewan MacColl, Kitty MacColl, Calum MacColl, and Kim Seeger accompany themselves on traditional acoustic instruments. Liner notes explain traditions behind the lesser-known Christmas songs.

I checked this album out on Amazon and was able to listen to samples of most of the songs and they are truly beautiful and meaningful, purveying the true meaning of Christmas. Unfortunately there is no video of any of the songs on YouTube. I ordered the album and I may try to put it on YouTube. ---JMB

11/10 It came today and it is truly beautiful. it's well worth the price. If you're looking for something different for this Christmas surely this one and the other one listed below it, are two to seriously consider. --JMB

As the back cover of the included booklet says, "The book [and thus this set] tells the story of Christmas in song. The scene is set, with stars and shepherds, the expectation of the baby, the journey to Bethlehem. It is followed by the birth, the rejoicing, the presents, the adoration, interspersed with sober pieces of religious praise and less sober festive pieces. Not all songs are about Christmas. It's a musical tapestry with background and foreground and many colors and shapes." 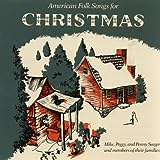 --OR this real one-of-a-kind album by the Kingston Trio:

At the height of their career, the Kingston trio decided to take a chance and make a really unique Christmas or rather Holiday album, which they called, "The Last Month Of The Year." Note that the word "Christmas" did not appear in the album title, nor were there any popular Christmas favorites included. As the Amazon review points out, it was certainly far from the typical Christmas release, and surely the most ambitious album they had done thus far, and perhaps even the most ambitious of their career.

The album is kind of smorgasbord of scripture amd European legends, of lullabies, and Southern spirituals. all of which the trio gave their own inimical treatment, It's complete with unusual instrumentation really tricky arrangements.and harmonies

On a personal note: I had the cassette tape and, yes, the songs are truly unusually beautiful and seem to exude the atmosphere of Christmas despite the lack of familiar Christmas songs.. It's a balanced mix of secular and sacred as to subject matter. There is one song which, although it sounds beautiful, I didn't really care for, as it deals with extra-Biblical myth or tradition about the early years of Jesus. I have recorded all the other songs onto another tape and sold my cassette copy on eBay. But, despite the extra-Biblical nature of the content of that one song, this album is still well worth the price.

Above: The Kingston Trio singing the title song from their album "Last Month of the Year" listed below.

Below: The Kingston Trio singing singing "Bye Bye thou tiny child," the first cut from the same album, "Last Month of the Year," listed below: 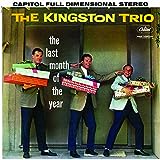 The Last Month Of The Year
Buy Now

There are also many Christmas songs that fall under the category of uniquely funny or crazy. They poke fun at everything related to Christmas from sleigh rides to Santa to just plain commercialization. There are too many to list, but take a listen to these 7 which I listed below. I'm sure you'll get at least a smile, if not a big belly laugh.

The first one directly above, as you may have gathered if you listened to it, is a mildly biting satire about the commercialization of Christmas, the playing of Christmas songs (apparently on radio) and the fact that the Christmas season comes earlier every year. There's even a mention of Hanukkah so the Jews won't be left out. What, you didn't listen yet? Well go back and listen--it's well worth the time spent.

The 2nd, directly below is by Tom Lehrer and uses familiar Christmas tunes to put down the fastidiousness of Christmas festivities and gift giving and the constant prompting by the media to buy.

The 3rd, below, is, in my opinion even more biting and satirical as it uses two characters from Dickens as well as the traditional Christmas tunes to poke fun at the advertising world itself. Scrooge is the chairman of the board the purpose of which is to find new ways of tying products into Christmas, while Bob C ratchet is a small time spice dealer who is the sole voice of reason in the entire production. C ratchet's plea for them to remember whose birthday we are celebrating is drowned out by their persistent Christmas ad jingles. These two are also well worth the time spent listening--especially this third one.

And then, there's the just plain silly stuff like these two songs below from Yogi Yorgesson::

Above: A satirical look at the traditional winter song "Jingle Bells," telling of not-so-pleasant sleigh ride.

Below: A hysterical satirical musical story of yearly Holiday mishaps which occur when relatives get together to celebrate.

Three of the above songs are here in this album (Tom Lerher's, carol, Stan Freeburg's Gren Christmas, and "I Yust Go Nuts at Chritmas," plus more wacky Christmas favorites. 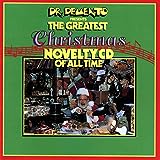 The Greatest Christmas Novelty CD of All Time
Buy Now