Disney Fairies offer a lot of costume choice for Halloween whether you are going out by yourself or in a group.

There are many different fairies to choose from. The most famous of the fairies is the iconic Tinker Bell.

Tinker Bell from Peter Pan fame has a simple costume: a green dress and shoes. So it is easy to pull this costume together. In addition it is fairly easy to get her friends costume look as each look is influenced by a specific color.

The only essential part of any fairy costume is the wings. This is a must have accessory if you wish to be transformed into a magical fairy.

Make Your Own Vidia Costume

Once upon a time Disney had a licensed Vidia costume but it is no longer being produced so fans of the fast flying fairy will have to pull their own costume together.

There are a few things you will need to create you costume. The first being a purple pant suit. Vidia wears a pair of purple pants and a top with purple leaf accents. You can easily get the look by purchasing a pair of purple tights and matching purple top with a v neckline. This will be enough to get people to see you as the edgy fairy because you will also being including other elements like wings and her signature hair style; however for a more authentic look you could try adding fabric to mimic the purple leaves that adorn the bottom of her top. You could sew them to the bottom of your top or you could try to attach them with Velcro if that is easier.

Vidia wears her long dark hair up in a ponytail on top of her hair wrapped in a purple band to match her outfit. Her long bangs are left out of the pony tail and swept to either side of her head. Her bangs appear wavy and curly.

Vidia's eye makeup seems to feature two purple tones. One on the lid and the other in the crease. Her shoes are purple and her wings are glittery. 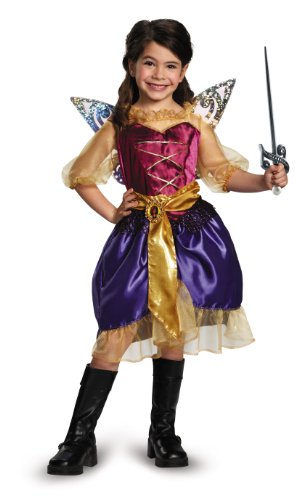 We are first introduced to Zarina in the Disney Fairies film "The Pirate Fairy." Zarina works as a Pixie dust fairy. She is inquisitive and curious. When she makes a mistake she is forced to leave Pixie Hollow and find a new path as a Pirate Captain.

The Zarina costume focuses on her pirate look. The dress features a pink top and purple bottom. There are fringe accents on the bottom of the dress. The bright gold sash on the dress gives the costume a more glamorous look.

Of course no Zarina costume would be complete without a pair of fairy wings.

Another key part of the Zaria costume is her wild brown hair. Her hair is accented with a scarf that she tie at the top of her forehead. The official Disney costume does not come with a head scarf so you will need to add your own for a more authentic look. 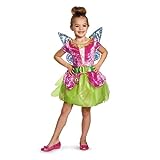 The typical Tinker Bell costume gets revised with the Official Disney Pirate Fairy costume. Tink's signature dress gets a change with a pink jacket and green belt. This costume gives you a more colorful look. It gives you another option to the classic green Tinker Bell sleeveless dress.

The costume to the right features a dress with character cameo and holographic detachable wigs.

While the costume gets a new look her hair is kept the same. Her hair is still blonde and pulled into a bun on the top of the tinker's head.

Finish you Tinker Bell makeover by applying some fairy magic to your face.

Silvermist or Sil has she is referred to by her fairy friends is a water fairy. Silvermist is optimistic and a bubbly type of fairy.

To dress up like this Disney fairy you will need a few items. For the costume dress you will need a over the shoulder dress. Compared to Tinker Bell Silvermist's dress is much longer and seems to flow much like the babbling brook.

To get the complete look you will need to concentrate on one of the water fairy's signature features: her long straight black hair. If you already have dark hair like Silvermist you will only need to style it. If you have a different hair color. You might want to invest in a long black wing. You will want one that does not have bangs as Sil does not wear her hair with bangs.

The last piece to the Silvermist costume will be the wings. You can either make your own or just pick up a pair at you local costume shop.

Sew Your Own Disney Fairies Costume - Make your own fairy costume

Simplicity Sewing Pattern 2872 Child Costumes, A (3-4-5-6-7-8)
This Disney Fairies pattern will help you create the right fairy costume for your Tinker Bell and the Disney Fairies fan. Patterns are available for Tinker Bell, Silvermist, Rosetta, Iridessa and Fawn. With the aid of your sewing machine these costumes for Halloween or dress up will be made with love. If your child has their heart set on being Iridessa or Fawn sewing the costume might be your best option as they costumes are hard if not impossible to find.
Buy Now