Jack Skellington was the main character in the popular 'The Nightmare Before Christmas' Disney film.

He was known as the Pumpkin King of Halloween Town, but when he grew bored with his role of overseeing the Halloween festivities in the town, and so went outside his expertise when discovering Christmas Town, and attempts to help them celebrate that holiday, with obvious disastrous results.

But for our purposes, it's the compelling and humorous look of Jack Skellington that makes him such great material for makeup and a costume for Halloween or another costume event.

Jack normally would dress up in a pin-striped suit with a bat-shaped bow tie. Occasionally he would also dress as a scarecrow with the head of a pumpkin.

All of the looks people choose to design for the face of Jack Skellington are similar, although the mouth and eyes are created different by some.

Later on we'll look at several tutorials to see how to create an awesome Jack Skellington face.

While it has nothing to do with makeup because of the Jack Skellington mask, the clothing is a great example of the way Jack could have looked in the real world. Now all you have to do is learn to walk on stilts to make the character complete.

The look of a skull in art is strongly influenced by how you make the empty sockets of the eyes, and that's the case with Jack Skellington makeup as well.

Every skull of the Pumpkin King will look different, mostly based on how the eye sockets were designed. That doesn't necessarily make one look better than another, just different, depending upon how you want to portray the character.

Some even include eyebrows on Jack, as the person below did, which gives him a completely different look as well.

Adding the white hat below to convey the idea of a skull was pretty interesting. Too bad a skullcap wasn't chosen which could have been easily adapted to really look like a smooth skull.

Jack Skellington with Strong, White Base

I call attention to the white base of this Jack Skellington makeup to contrast it with the first photo. In the first one it's not as thick, so you are able to see the skin show through the white makeup. Below you see how it's completely covered, with no skin whatsoever showing.

Also note how the dark eye sockets and the rest of the black sticks out clearer because of the thicker and brighter white base.

With the need to have an entirely white head when donning a Jack Skellington look, whitening your hair is a good option, as seen below.

It works good, and base of the hair where it meets the skin is pretty well done. Again the decisions to include eyebrows has been made, adding a little bit of a differentiator.

Too bad the ear wasn't completely covered in white, as well as the neck. Still, overall a pretty good job.

Next we have several Jack Skellington makeup video tutorials. It may seem redundant to provide several makeup tutorials for Jack, as it would seem a white face with some black around the eyes, nose and mouth wouldn't bee that difficult or different.

In reality people do make some wonderfully different Jack Skellingtons, offering a unique look that may fit you better. 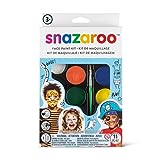 Jack Skellington in a Tuxedo

Here we have a very different Jack Skellington face, because of the more bluish grey color of the eye sockets. They are also a little larger than the rest of the Jack's here.

Wearing a tuxedo in place of a pin-striped suit isn't a bad choice, as it works well with the chosen look. The brow lines on top give the appearance that he's not as confident as usual. Maybe this is after he failed at the Christmas celebration

Now we can't completely forget about Sally when it comes to Jack Skellington, as her character adds a perfect choice for those wanting to go out in couples' costumes.

The two look terrific together. Both have apparently worked up a thirst and are downing a beer.

Jack and Sally's costumes are awesome, with the two looking in character very accurately.

One thing to get out of it for an idea is the way the man dressing up as Jack chose to go with a costume he bought, but deciding to be made up as Jack with his head. It looks really good.

Jack Skellington is one of the most familiar costumed characters when it comes being directly related to Halloween, and makes great subject matter for the costumed parties you may go to.

As you see directly above, it's also a fantastic way to go as Jack and Sally in couples' costumes.

So if Jack Skellington, and/or Sally, are an attractive option for you, you now have the tools at your disposal to make a great Jack Skellington face and head, resulting in getting a lot of attention and comments from those delighted by the ghostly skeleton.