Halloween Through the Years

Growing up in a small town in north Louisiana, far away from the haunted houses and voodoo of New Orleans, Halloween was a calm affair. We donned costumes and held Halloween carnivals at school, but there was very little horror involved in these activities. Harvest decorations were the mainstay, with lots of pumpkins, corn, scarecrows and bales of hay. Halloween was just a lot of wholesome fun when you got to eat delicious treats, have parties and go trick or treating.

Then I moved to south Louisiana, the celebration capital, and I learned how to have a good time and party! Halloween in the south is like a theatrical production with elaborate costumes, lighting, props and music.

Come with me on my Halloween Adventure as I travel to the past in north Louisiana and also, to see the sights and sounds of a south Louisiana Halloween.

The Halloween Carnival at the elementary school was the big event of the season. Mr. Abington, the principal and an artist, really knew how to set the stage. I remember many booths in the school gymnasium and one of the teachers dressed as a witch walking around cackling and passing out candy. I really didn't like the witch. My how things change.

The Haunted House was upstairs in one of the sixth grade rooms. All the lights were out and there was spooky music. We entered through the long dark, cloak room. This was an old school and each classroom had one. That's where you had to put your hand into bowls of gooey stuff and they told you it was eyeballs and guts and other gruesome stuff. When you went into the main classroom there were ghosts and goblins to boo and moan at you.

It's funny that years later, as a school librarian, I would be running the Haunted House for our school carnival and dressing up like a witch and reading stories to the children and cackling. However during the 1990s like many schools, ours stopped having "Halloween" Carnivals and started having "Harvest" Carnivals, minus the haunted house and scary stuff. I don't think that my childhood experiences with Halloween warped me in any way and I still enjoy the spooky stuff. We never took it seriously. It was always just a fun night of make believe.

Most of our costumes were homemade. Mom was handy with the sewing machine and made most of our clothes. One year, when I was in fourth or fifth grade, I got to wear a "store bought" plastic princess costume, complete with mask. That was the year that we went to town and did trick or treating in a friend's neighborhood. Less than an hour into the fun, I was sweating and the mask was shoved on top of my head. By the time we went back to the car, the plastic costume was in shreds. To this day I never again wore a plastic costume or a mask. I learned early that cloth and face paint were the way to go.

Each October, Coushatta would have a parade to celebrate the parish fair and Halloween. One year, I was selected to ride on the elementary school King and Queen's float in my little silver glitter costume that was left over from the May Fete performance the year before. (That's me on the King's left.) We recycled costumes back then. In fact that little costume was still in the closet of the old house for years after.

The animals of Halloween were always a part of my life. When the leaves fell from the trees in autumn, we could observe the birds of prey on their perches along the highway. Sometimes at dusk, we would see owls.

Cats were with us year round, for as long as I can remember. At Halloween, black cats were the Halloween symbol that I wanted to draw or paint for the Halloween art projects that we made at school. Today, I continue to be akin with nature and animals. I have two black cats that have chosen to be a part of my life as well as an orange and a brown tabby.

Oh What Fun, a Teenager

Our family always had at least one party around Halloween because my younger brother, my nephew and I all had October birthdays. One year we had a giant party combining all three special days. The teenagers of my age group congregated on the carport where we played the hi-fi stacked with 45's and danced and ate from the tables that were loaded with Halloween and October goodies.

My brother and nephew (who were five years younger) and their friends were out in the yard where my Dad had built a fort out of hay on the side of the hill on which our house stood. There were toy guns and places to hide and they all had a great time playing war and hide and go seek.

Another enjoyable teenage adventure was the nighttime Halloween hayride, with a date. We were supposed to sing Halloween songs and tell ghost stories, but it was a little nippy so most of us just snuggled down in the hay to enjoy the ride and ...err... the beautiful Fall leaves.

A collection of 100 of the best songs of the season. This would be a great addition to a haunted house or to a party.

My mom was the best cook in Coushatta and my Dad was a good cook, too. Mom baked mouth watering cakes, cupcakes, cookies and made candy. In October, she would usually donate a cake to the Cake Walk booth at the Halloween Carnival.

I loved the Cake Walk, where they put out a circle of chairs, one less than the participants, and started the music. When they stopped it, everyone tried to sit in a chair. The one who missed is out. After several rounds, the person who got the last chair won a cake. You had to be quick and agile. If you weren't quick and agile, then having a big butt helped a lot.

Mom's cakes were always a hit at the carnival and at home. We learned from a master. When we were going through her things, we found her favorite cookbook with notations and recipes written in. Oh what a treat and we didn't even have to play a trick! 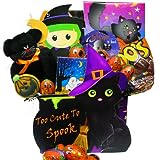 Too Cute To Spook Halloween Chocolate and Candy Gift Basket

Yummy chocolate and candy filled tote. What a neat treat and you don't have to do a trick.

In October, the weather gets cooler in Louisiana, so everyone heads outdoors. The men to hunt and the women to gather. I was always torn between the two, but I did more gathering than hunting.

Mom and us girls would head to the yard and the woods to look for natural materials to make decorations for the house. As I walked through the forests and fields, I was always fascinated with the colorful mushrooms as well as the many twigs, fruits and berries. Once we got back to the house, we would use our creative talents to place the found objects into seasonal arrangements and crafts.

All Grown Up and Living in South LA

In the Quarter - Ghosts and Ghouls Are Out This Night

Adult - Down to South Louisiana

When I went to college at LSU in Baton Rouge, south Louisiana became my home. I had been to New Orleans before, as a teenager, because my father's family was originally from there, but experiencing the fun as a young adult, without supervision was a different story.

I enjoy the Halloweens in the south. The costumes are excellent and the people down here really know how to have a good time, no matter what they are celebrating. Halloween in the French Quarter is an experience like none other. It's sort of like Mardi Gras without the parades and the crush of people, but stranger.

How's your Halloween? Please leave us a note