For your next Halloween party that you are hosting for your child or the bigger children like you, why not hand out some Halloween decorated water bottles.

Little trick-or-treat monsters get thirsty. When going door to door, it would be nice to be drinking from one of these filled with their favorite monster punch.

These are my top ten picks of the best Halloween water bottles on Amazon. Take the poll to pick out your favorite.

These plastic water bottles are great for a person on the go and so easy to clean in the dishwater. 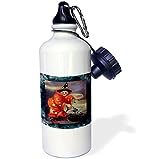 Are Wtiches Real? - Do you believe in witches? 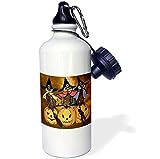 Many young women were tied up to trees and then set on fire. Others were held down under the water in the lake or river. If they survived or not survived was one way of letting the rest of the community if they were witches. This also happened to men too, though it was more common with some of the younger women.

Birthmarks on a person's body were considered the mark of the devil. Back in those olden days, you better not had a birthmark on your leg or any where else.

I have a light birthmark on the side of my knee. If I were born back in the 1800s or am a product of reincarnation then I could have been prosecuted as a witch.

Today there are practicing witches. They call themselves pagans. Many of these people I have met online and and they seem very nice. 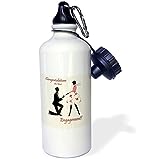 What do you think of black cats? - Have you owned one?

A roommate of mine had a black kitten named Noir. She was a sweet little cat. But she constantly ran into walls. We did laugh at this at the time, but maybe there was an underlying reason why she ran into walls.

Noir grew up to be a happy cat and had kittens of her own.

A black cat is not a purebred but a combination of cat breeds.

What are you views on black cats? 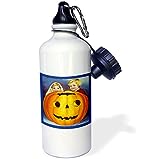 A Water Bottle Everyone Will Love

Luminaries of Halloween characters as shown with the cat, haunted house and bar give out an creepy and fun glow on this chilling night.

Let you little goblins have something to drink along the way.

This water bottle is available with the source link above. Under the title heading for Jack o' Lanterns on Water Bottles

#8 and #9 Pumpkins and Cupcakes Bottles

When is the best time for water bottles?

They are spill proof and ideal when traveling, walking, jogging, riding a bike, sporting event and exercising.

Water Bottles to bring to the Party

Vote for the water bottle you think would look nice at the party.

Be sure to visit Gifts You Treasure. Some great ideas come from here.

Are you going to the Monsters party? - Thanks for the comments, thumbs up and sharing this lens