Top Wolf Man and Werewolf Costumes for Halloween & Other Occasions

It's that time of year again to choose your Halloween costume! While some people like silly or sexy costumes, I believe the scary ones are best. After all, isn't that what Halloween is about?

A werewolf, or wolf man, is a classic Halloween spook, so why not dress up as one for Halloween? If you don't like the full costume, just wear wolfman hands and makeup, and you're all set! If you'd rather go all out, there are a number of costumes to choose from. Your imagination is the only limit!

Following are easy ways to dress as a werewolf and wolf man for Halloween or any other scary costume occasion:

Have you ever worn a werewolf or wolf man costume?

What Is A Werewolf?

A werewolf, or wolf man, is a fictional beast. Tales have been told for centuries about a human who was bitten by an infected wolf, which turned him into a werewolf.

From there, the stories change according to who is relating them. Such as:

Regardless of who or what a wolf man is, it is a creepy story to tell around a campfire or at a sleep-over. Or better yet, as a costume to wear on Halloween!

If you prefer to wear your own clothes instead of a furry costume, it is quite easy and affordable to become a wolf man! Simply wear some black clothing, such as black slacks and a tattered, long sleeve shirt. Add a wolf man head, hands and

feet, and you're ready to go!

If you'd rather not wear your own clothing, or just don't have anything that looks "wolfie", you might prefer to purchase a full Wolf Man costume. This is one of the best werewolf Halloween costumes I've found for adults, as it comes with both mask and shirt: 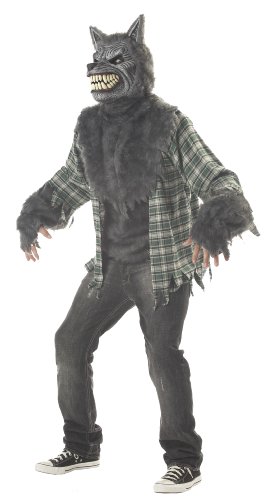 Full Moon Werewolf Costume
This costume is a two piece set. The flannel shirt is made of 100% polyester, while the fur portion is a polyester/acrylic mix. It comes in both medium and large sizes, which is perfect for most adults. The mask covers your entire head, and has an added feature: When you move your mouth, the mouth on the mask moves as well! It does take a bit of adjusting to get the movement correct, but when it's set... you'll be the terror of the party!
Buy Now

This costume does not come with wolf man gloves or feet, so you might wish to purchase them separately. However, if you prefer the "Teen Wolf" look, simply add a pair of high-top tennis shoes to round out your look.

Kids make great werewolves and wolf men, as they have the imagination to go along with the costume. A complete costume is the easiest way to go, but if you have a bit of artistic talent, you can make your own.

Simply add fake fur to the head and hands, and you have a mini wolfman! Or, just purchase a mask and hands, add a flannel shirt and jeans, and your child will look like Teen Wolf!

Kids are cute in wolf man costumes, but they can also be a bit scary! Dress your child up in this two-piece costume, and he'll scare the neighbors into a treat!

Child Werewolf Costume
The costume includes both a mask and shirt, so just add some pants and shoes. The mask and top both have fake fur which surrounds the face, chest and arms. Child sizes available: Medium, Large and Husky. For children, ages 8 and up.
Buy Now

A werewolf does not have to be male. Indeed, there are plenty of costumes available for girls! I particularly like this one, as it comes as a full set.

Monster High Clawdeen Wolf Costume
It has a purple skirt, and shirt with pink stripes; colors every little girl likes to wear! It has a flirty skirt, but isn't too "grown up" looking for your pre-teen. The wig is sold separately, and can be purchased online.
Buy Now

It's fun to dress in costumes, whether you are a werewolf, vampire, witch, hippie, pumpkin, or other type of creature. I've been known to dress as a cat, a leopard, a witch and a ghost. But I'm not too imaginative, so I normally purchase a costume.

I haven't decided yet on what costume to wear for Halloween this year, but I'm leaning towards a werewolf costume. What do you plan to wear?