A Tasteful Book: Silk and Tea in the North Scandinavian Trade

What sort of interest could there be in studying Scandinavian trade networks connected to their consumption of tea and silk from Asia? Of the two Scandinavian states, Sweden was certainly no great colonial power, and although Denmark had colonies scattered across the globe, it too could hardly proclaim itself a colonial nation like France or England. Neither was the center of the later industrial revolution. The story of their relationship with Asian goods was bound tightly in the story of industrialization like England. Their East Indian companies were small in comparison to the big players - - the French, the Dutch, and the British. And yet, Scandinavia's tea and silk history makes a surprisingly interesting read. It sheds valuable light on the way in which Scandinavian consumers consumed tea, in the ideology of production and export, naturalism, business practices for companies without military-territorial interests like the rest of the big East Indian companies. Furthermore, it enables a more nuanced understanding of the commercial structure in England in particular, and defines a fascinating history of the development of tastes, preferences, and classification for both the taste of tea and the color of silks. All of this is covered in this intriguing book, Silk and Tea in the North: Scandinavian Trade and the Market for Asian Goods in Eighteenth-Century Europe by Hanna Hodacs, which covers both the external and the internal factors of the Scandinavian commercial engagement with China during the 18th century.

The introduction of the book deals with the history of the European-Asian trade network, how tea and silk both fit into Scandinavian trade patterns, consumption patterns in Scandinavia, the ideology associated with Scandinavian trading efforts (Cameralism, a brand of mercantilism for continental powers seeking internal self-reliance and a legitimating factor for rationalization of resources), production material history, and the relationship of Scandinavia to the broader European trade network. Chapter 1 is to some extent a continuation of the introduction in discussing the generalities of Swedish-Danish trade. It deals mainly with the commercial environment of trade with China and the competition between the various East India companies, as well as some essentials and details on the trading relationship, and the sources utilized. Chapter 2 deals with the smuggling of tea into Britain and the nature of the British market (vital given how much Scandinavian tea was re-exported there), and the dynamics of the Scandinavian trading relationship in China, such as the silver used to pay for it, buying times, packaging and shipment processes, consumer tastes and how they interacted with market characteristics, such as the middlemen who tasted them. Chapter 3 proceeds to silk, such as the origin of Chinese silk exports, types of silk pieces, color classifications, whether it was consumed or re-exported in Europe (Most Danish silk imports were re-exported although demand later grew, while most Swedish was consumed domestically, in an astoundingly large domestic market for Chinese silk, until its importation was restricted by a ban), the relationship of Chinese silk to the domestic industry and the Swedish consumer base (it provided cheap silk imports for average Swedes) and the type of selling system present. Chapter 5 deals with attempts to replicate foreign imports within Scandinavia to enable self-sufficiency by a mercantiliste (Cameralist specifically) model, such as the attempt at sericulture in Sweden with the model village of Kanton near Stockholm (note the similarity to Canton in China), or famed naturalist Carl Linnaeus who tried to grow tea in Sweden, to dismal failure. Attempts to promote tea substitutes were equally unsuccessful. Dyes were another ground for innovation, with nearly 20% of Sweden's total import value of exotic colonial goods being associated with their import (only sugar was larger, at 33%), and partially successful ultimately, especially when synthetic dyes arrived. A conclusion summarizes the point made and discusses the importance of Scandinavian tea and silk trade in a European and global context.

Personally I always view it as a must for a book to analyze not merely the how, but also the why. This book thankfully does this economically, showing why certain companies gained more profits than others - smaller companies focused directly on trade with China ironically did better than large companies with huge forts, navies, and armies, as these military tools were irrelevant in the equal trading network at Canton - and discussing the reasoning behind ship routes and the movement of trade goods. It also discusses how and why policies relating to silk at least changed over time in Europe, although why Sweden's imports of silk were so large isn't something which was evidently clear. The import substitution efforts in Sweden are also a good example : the book goes beyond merely stating mercantiliste thoughts, but discusses at length the ideology and objectives of Linnaeus in his mission to replace tea, commenting on his pan-European, rather than specifically Swedish, perspective. This is repeated throughout, as the book explains the deeper relevance of the Scandinavian tea trade.

A particularly good aspect of the book which I hadn't previously considered was the quality and taste of the goods. While there is much note about the expanding breadth of products which became available to European consumers throughout the 17th and the 18th century from across the world, the quality within categories of products such as tea is something which doesn't seem to receive much note elsewhere. On the merchant side, merchants had to be wary about excessive concentration upon a few Chinese traders, beyond price concerns, simply because that would mean they might have to accept poor quality tea without an other option, ruining their reputation at home. The Dutch by contrast, liked large merchants because their cargo would be more uniform. Packing too impacted the taste, as packing to the brim resulted in a dusty tea from it being pulverized, increasing profits. Ironically this came to be appreciated by many tea packers in Europe who liked to pack dusty Scandinavian tea with looser Dutch tea, and they met Dutch attempts to move to the more densely packed (and hence more profitable) Scandinavian model with hostility! I find the mixing of tea in such regards to be fascinating, as in the 19th and 20th century there was a focus on particularism and the uniqueness of brands, especially for prestige products, such as for example the French terroirs with the focus on wine being defined by land. During the 18th century, there seems little notice of this, and instead the blending of teas seems entirely acceptable. Perhaps it had something to do with the essentially exotic nature of China itself, which led to no additional need for differentiation? Regardless, it is an intriguing subject.

The book also does an excellent job of placing into context the effects of this trade upon the Scandinavian countries domestically, which ends the dichotomy existing between East India companies and the homeland. The profits gained and their effect upon the state's revenue are noted, but also the domestic opposition to the import of silk in the pre-1750 period from China (after 1750 it was banned in Sweden so there was less of a complex terrain to study...) Furthermore it notes that the Scandinavian trade was conducted with a much higher degree of silver than the other European nations, which enabled the trade to be conducted more quickly than other European states, who had to spend time trying to sell their goods and then buying and loading their tea, while the Scandinavians were able to simply buy and load the tea. The process of selling goods could take quite some time : in one case, a shipment of English cloth took two years to sell off. But in the mercantiliste atmosphere of the time, what was the reaction of the Scandinavian political elites to such a large outflow of silver? The book does make mention of some Scandinavian attempts at growing tea at home, as incredible as that may sound, but it would have been a fascinating subject to expand upon during the early period, it principally seems to focus on what the reaction was later on with the proposals for import-substitution in the later 1700s.

While overall a fascinating book, there are some areas where I would have preferred more information on, such as the physical nature of Scandinavian commerce and ships with the East. Lacking in the same network of global trade bases and armies and navies, how did they ensure their protection, and what sort of arrangements were pursued in regards to their resupply at the stations of other companies? The book makes note of the difference in commercial strategy employed as a result, with commerce being devoted principally to the tea trade instead of to the militarized struggle in the Indian Ocean, but how did it effect the lives and operations of regular Swedish and Danish commerçants and navigators? It mentions that there were not stops in India on the way to China, so where did they stop at instead? Similarly, I would have been intrigued to learn about the types of lingua francas utilized in the Chinese trade and how Danish and Swedish traders interacted in this linguistic space.

In asking so many questions, it might sound as if I have grievances or find the book incomplete. Nothing could be further from the truth! This is a very detailed, well written book, with a superb amount of fascinating information about the Scandinavian tea trade which details both its commerce with East Asia and its effects and structure in European markets. It is the hallmark of a good book that it leads to more questions that one wishes to expand upon, to further the already rich amount of information available. Be it for studying East Indian companies and trade in the 18th century or the political economy of Scandinavian states, the book makes an excellent historical volume which deals with a fascinating depth of subjects.

5 stars for Silk and Tea in the North 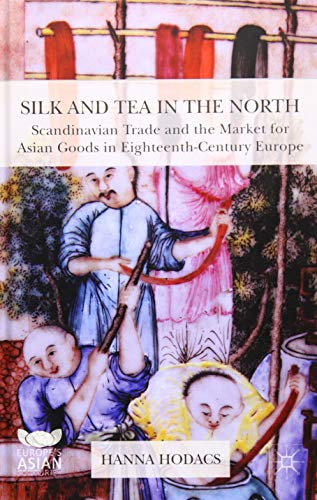 Silk and Tea in the North: Scandinavian Trade and the Market for Asian Goods in Eighteenth-Century Europe (Europe's Asian Centuries)
Buy Now