Review: From ACT UP to the WTO Edited by Benjamin Shepard and Ronald Hayduk.

From ACT UP to the WTO 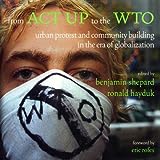 From ACT Up to the Wto: Urban Protest and Community Building in the Era of Globalization
Buy Now

Everybody likes to think that they were THERE: that they were at the beginning of something, the first to engage in some activity which later became of cultural significance.

Maybe you saw Pink Floyd at the UFO club in Notting Hill Gate in 1967? Or the Sex Pistols on their Jubilee bash on a boat on the Thames ten years later? What about the massive rave at Castlemorton in 1992? Or the road protest on Twyford Down near Winchester which kick-started the anti-roads movement at around the same time?

Personally, I always like to say that I am responsible for Reclaim the Streets. The basis for my claim is that before the first march and rally against the Criminal Justice Bill, in May 1994, my name was one of three registered at Scotland Yard as being responsible. It was a beautiful sunny day and people danced in the fountains at Trafalgar Square to the Rinky Dink bicycle-powered mobile sound system. Later, maybe, people thought that it would be a good idea to hold a party in the street.

It’s an absurd claim, of course. I can imagine veterans of RTS going purple in the face right now, knowing that CJ Stone hardly ever attended a single meeting, certainly took no part in any action, and that when he did attend meetings, he made no noticeable contribution to the proceedings.

It’s true. And yet I still maintain that I was there, on the ground floor as it were: in spirit, if not in body. It’s possible for many people to have the same thought at the same time.

The word is Zeitgeist. The spirit of the times. To have been around in any era, to have participated, even on a peripheral level, is to have absorbed some of its imperatives, some of its meaning. So even if even you didn’t actually see the Sex Pistols in 1977, you will have understood their milieu, you would have been a part of the movement that brought them about.

I can’t speak for people younger than me. Chances are you will have your own cultural moments: your own measure of what is significant to you. Possibly the anti-capitalist mobilisations in Seattle and other places - in Prague or Genoa - will be part of that.

It’s a similar claim that forms the basis of the book: From ACT UP to the WTO, which traces the history of the anti-capitalist movement back to the work of American Gay Rights and AIDS activists in the late eighties (ACT UP: the AIDS Coalition to Unleash Power).

It is a claim that is both true and false at the same time.

What you can probably say is that Gay Rights activists played a significant part in developing the milieu of the anti-capitalist movement, both in the US and in the UK. Certainly the style of street protest over the last 20 years or so has changed, protest now being a much more lively process than it used to be: more like a carnival, less like an exercise in political tub-thumping. More music, more dance, more style, more costume, more theatre, more irony, more pleasure. Less of the dreary speeches.

Everyone has their own images. We remember the people dressed up as Turtles, or the girl in the pink tutu with the tickling stick tickling the riot police. We remember the tear gas, and the robocops in their impenetrable uniforms harassing the crowds. We remember the playfulness of one side and the deadly seriousness of the other. The humour on one side, the weapons on the other.

The book makes a good case for tracing the links from ACT UP to a number of the current American anti-globalisation groups. Indeed, it would be a surprise if activists in different areas didn’t meet up and cross fertilise ideas: if people didn’t learn strategies and slogans and organisational blueprints from one another. It’s also no surprise that Gay activists have been at the forefront of a number of important protests since the late sixties. Remember: within the lifetime of a significant proportion of the population (myself included) homosexuality has been illegal. Gay activists have already won one revolution: why not more?

“Globalisation” is a euphemism, of course. It sounds both positive and inevitable at the same time. What it actually means is the process of privatisation on a world scale. It is the corporate elites saying to us that in the future there will be no aspect of our lives that will not be subject to the profit motive. THEIR profit, their motives, not ours.

What we have to remember is that for the vast bulk of humanity it's not about single-issue politics. It’s not about Gay rights, or women’s rights of the rights of minorities. It’s about human rights. It’s about the right to life itself.

The significance of Seattle wasn’t only that a bunch of people had the sheer gall to dress up as turtles or to put on pink frilly tutus and to tickle the police. It’s not in the presence of activists, of whatever colour or sexual preference. It’s not in the marches of the Trade Unionists or in the intervention of the Third World delegates that closed the World Trade Organisation (WTO) down temporarily. Its in the alliance between all of these factions. It is in the hope of humanity for a sustainable future.