Art History in "the Devil in Silver" by Victor Lavalle

When not being a photographer, I write about art history! Please check out my work!

A horror novel, the main character Pepper (and others) has to deal with a strange, terrifying monster while locked up in a mental hospital.

However, if I could sum up this book in a word, it’s “flimsy”. While reading, I also found myself going, “Why?”

Allow me to elaborate. After assaulting some plainclothes police officers, Pepper is taken to a mental hospital. As the story continued, I found myself going, “Why don’t they take him to a police station and put him through the process?" That question is never answered and Pepper is characterized as someone who has no one willing to help him.

Despite that problem, I continued reading about a monstrous being hidden in a mental institution and is terrorizing the patients. In fact, this demon sneaks into Pepper's room (who's tied down) and starts beating him to a pulp. Now, apparently, while this being appears as a demon to Pepper, he doesn't appear that way to others. After brutalizing Pepper, an orderly just grabs the person and leads him back to his cell. There's no real explanation behind the demon visions (hospital medication?), and anyone who has read the novel saw something that I missed, please leave a message in the comment section.

I know author Victor LaValle wrote this after exploring the bureaucracy of mental hospitals, (he explained this in the Author's Note) but the novel's execution still came out flimsy.

Honestly, if you want a stories about wards with patients dealing with antagonists, I recommend Unsane and Bubba Ho-Tep.

All About Vincent Van Gogh

While in the hospital, Pepper receives a book of Van Gogh’s letters. He also contemplates the book cover’s self portrait of the artist and his expression. Furthermore, fellow patients are awestruck by Van Gogh's expression and identifies with the artist. As Pepper reads the book, the text describes sun rays hitting the page, which could act as a reference to Van Gogh’s painting style.

The author even stops the main plot involving a demon stalking the mental hospital to devote a chapter to Van Gogh’s life. That part was written in a casual style, full of slang terms and swear words.

The text mentions Vincent’s religious upbringing, devout Christian convictions, and his inability to have a stable career. On the last part, I think the author was making a parallel to Pepper. Near the end, Pepper helps another patient escape the hospital. She flees, and travels to Amsterdam's Van Gogh museum, and mails a postcard to Pepper that has a painting by the very same artist. This leaves Pepper happy.

Honestly, I have complicated feelings about Van Gogh's addition. On one hand, the Van Gogh layer is fine. Before the story officially starts, there is a Van Gogh quote about life in a mental institution, and it worked well as foreshadowing. Pepper and others taking solace in the Dutch artist's life was nice too. On the other hand, if you removed Van Gogh from the book, it would not affect the main plot at all.

As I wrote in a previous section that Pepper sees a demon, but, to elaborate, others can see a shriveled, old person. This part did remind me of the

Doctor Who episode where the Doctor helps Van Gogh deal with a demon that only the Dutch artist sees, only that episode was better written.

Now, I have an anthology of Van Gogh's letters (and two biographies!) and if I find something that inspires me, I will update this article.

Compared to the Van Gogh allegory, the other art history references I have rationally no problem with. Mainly because LaValle mentions an artwork that I had never heard of and he describes it with so much detail that I was able to successfully track it down. I ended up learning something new. Using Lucas Cranach the Elder's The Werewolf or the Cannibal, LaValle describes a scene most gruesome and horrible.

When a scene involves an Italian restaurant, LaValle mentions a mural of Italy inside the restaurant that uses visual trickery. He also uses art when describing people's physical appearances, such as comparing one person to modern art designs of animals. Later, he compares a patient’s expression to President Kennedy's portrait. To me, that's such a fascinating comparison to use Kennedy's melancholy expression that's so unlike other presidential portraits.

Never thought I would group these two works together.

What I liked about this book

The book's horror was really well executed and the main monster was unnerving and horrifying. Also, as someone with a mild form of claustrophobia, the description of the mental institution and the people stuck in the hallways and rooms left an impression.

Also, the reason I read this book was because I really enjoyed a novella LaValle penned called

The Ballad of Black Tom, a Lovecraftian story that takes place in Harlem. I loved it. There was so much detail and life, and the finale reaches to such a wonderfully frightful crescendo. I recommend reading that story, and honestly, I recommend reading The Devil in Silver. It had flaws, but it was still enjoyable. 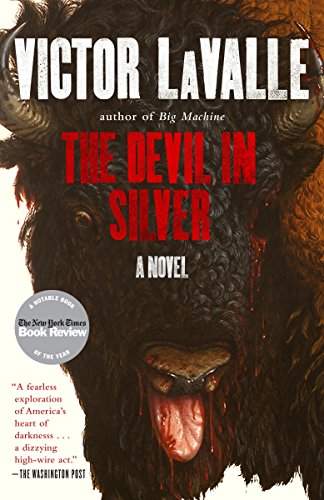 The Devil in Silver: A Novel
Buy Now