Writers have been known to draw their fiction from real life experiences and interests. Lawyers have written courtroom novels. Police officers have written detective stories. Explorers have written adventure and fantasy books. In their daydreaming during their day jobs, they imagine fictional scenarios that are then shaped into a brand new reality.

Author Damon L. Wakes has imagined new realities in his books which are rooted in his love of science and space travel. Below is my interview with Wakes about his books and his writing process.

Buy a copy of Face of Glass by Damon L. Wakes here! 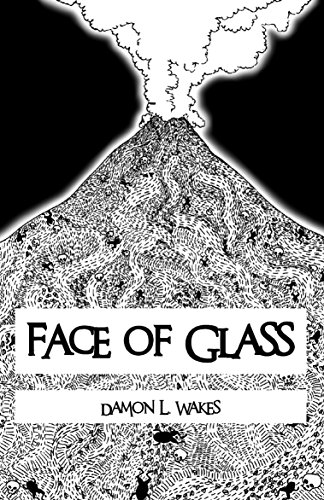 1. How many books have you written, and where can you buy them?

I’ve self-published five anthologies of flash fiction, and one prehistoric fantasy novel, Face of Glass. They’re available at all good online bookshops, which I try to link to from my website.

I’ve also recently had a sci-fi murder mystery, Ten Little Astronauts accepted for publication by Unbound. That one isn’t out yet, but by putting in a pledge on Unbound’s site you can get a first edition when the book is printed, and your name in the back of every copy as a patron of my work!

Pledges from supporters are the only way Ten Little Astronauts will make it into print. So if it sounds like a book you’d be interested in, now’s your chance to make it a reality.

2. What has been your greatest moment as a writer so far?

Filming the video for Ten Little Astronauts on board HMS Alliance: the exact same submarine where I did the bulk of my research for the book. Simply having a publisher behind me with the confidence in my work to pay for a professional video was a huge boost for me, but Alliance was a huge influence on the atmosphere and appearance of the fictional U.N. Owen, so being allowed back on board to set the scene for potential readers really meant a lot.

For the time being, I’m more or less focused on getting Ten Little Astronauts off the ground. Producing something of that standard—since it had gained me a Distinction in my MA course even before it was accepted for publication—was a colossal undertaking so I’m determined to do everything I can to get it in front of an audience. I’ll still be working on bits and pieces in the meantime, but as a virtually unknown author with a shot at distribution through Penguin Random House, my only real plan at the moment is to make the most of this opportunity I’ve already got.

From the opening chapter of Ten Little Astronauts:

Sweeping the torch across the room, he spotted a figure in the far corner, clutching an extinguisher, but the man hung motionless in the air. A ball of blood was forming on his back, held by surface tension to the axe planted between his ribs.

“In the event of an emergency, the ship defrosts ten crewmembers.”

Blore wheeled round to see a black-haired man, and a small group behind him, clinging to the handrails at the doorway to the next cryonic bay.

“With you and your friend over there,” the man continued, gesturing to the corpse, “I make that eleven.”

5. What’s your take on eBooks/eReaders?

I think they’re fantastic! As an author I can make some of my work available absolutely free, which has been great for helping to develop a following.

As a reader, I can carry an entire library in my pocket. I also find ebooks particularly handy for non-fiction—and especially tutorials and guides—because I can search for keywords to find just what I want. They’re not going to replace print books, but why would you want them to?

Ideally, I’m hoping somebody comes up with a neat way of bundling ebooks with paperbacks because in most cases I’d like to have both.

6. Have you ever done research before writing a book?

I do a lot of research, though not usually before writing. That sounds like a recipe for procrastination. Instead, I write and research simultaneously, making changes to my rough draft as I learn more about the subject in general and looking into specific elements in more detail when it becomes necessary.

For example, I visited HMS Alliance while writing Ten Little Astronauts early on in order to get an impression of what the dark, utilitarian interior of the U.N. Owen should feel like and adjusted the description to fit. When the plot demanded that I consider the radiation hazards of interstellar space, I put a lot more work into learning about that one specific area.

If I’d decided to learn everything there was to know about space travel before I even started writing, I’d probably still be researching and there would be no book. I find that this approach generally strikes a good balance between accuracy and efficiency: it’s only once resulted in me totally rewriting a 4,000 word academic piece two days before the deadline after a last-minute interview with a violin-maker.

8. Do you keep a diary, a writer’s journal, neither, both?

Neither. I have far more ideas than I have time to write, so trying to keep a journal would only eat up time that would be better spent working on more interesting things.

9. What famous author, living or dead, would you like to read your book?

This is probably an obvious choice, but I’d be really curious what Agatha Christie would make of Ten Little Astronauts. My novella takes the essence of And Then There Were None and moves it into a hard sci-fi setting, so naturally I’d like to hear her opinion of it more than anybody else. She had an impressive scientific background so I like to think she’d at least be entertained by the idea of one of her mysteries playing out on board an interstellar spacecraft.

10. Quote from a positive review of your book.

Since Ten Little Astronauts isn’t out yet, here’s something from M.R. Graham’s review of Face of Glass:

"Written in a gorgeous, lyrical style reminiscent of the best of oral storytelling tradition, Face of Glass digs deep into an expertly-constructed world an anthropologist could not fault. (I am an anthropologist, and I cannot fault it)."

11. Summarize your books in a few sentences.

Ten Little Astronauts is Agatha Christie's And Then There Were None set in space. The novella takes the essence of Christie's murder mystery and condenses it down into a tense, hard sci-fi thriller.

Ten astronauts are awoken from suspended animation to deal with a crisis on board their ship. Selected from a crew of thousands, none of them knows any of the others: all they know is that one of their number is a murderer. And until they work out who it is, none of them can go back to sleep.

Face of Glass is a prehistoric fantasy set on a tropical island. When a foreign merchant brings steel to the island, a young slave—ParuMe—seizes the chance to claim an ancient power, and with it his freedom. However, this power comes at a terrible price: it threatens everything he had hoped to gain.

OCR is Not the Only Font, Red Herring, Bionic Punchline, Osiris Likes This, and Robocopout are all anthologies of flash fiction. Most—though not all—of it is very silly indeed. If you’d care for a taste, the first three are free to download!