It goes without saying that a novel takes a long time to write. Even a short book requires months or even years of dedication. So, authors must choose a topic, story, and characters that are going to hold their interest during their writing time. You can really see what preoccupies a writer's thoughts within the pages of their text.

Writer Eva Pascoe has written about her love of fragrances and life in New England in her book, An Enlightening Quiche, and has answered some questions about her writing process and motivations below.

1. How many books have you written, and where can you buy them?

I’ve written two books in the genre of Contemporary Women’s Fiction. My debut novel, UNDERLYING NOTES, is available at Amazon in the Kindle Edition. My recent release, AN ENLIGHTENING QUICHE, is available at Amazon in eBook and Paperback format. One can acquire a signed/personalized copy at the discounted price of $19.95 through Authors Den Signed Bookstore under “Women.”

2. Why do you write for this particular age group?

While women of any age would enjoy my novels, I write from an over-40 perspective, so my characters are in that age bracket. I write with this age group in mind because having been there and done that, I can infuse my stories with realism that squeezes every ounce from the pulp of life: disillusionment and dreams; darkness and light; emptiness; fading beauty; displacement; love and sacrifice …

3. How autobiographical are your books?

My debut novel, UNDERLYING NOTES, was autobiographical for parlaying my own fragrance obsession and knowledge of perfume to revive my dormant flair for writing.

Proof—opening line of the synopsis: Carla Matteo copes with life by "taking to the bottle"— glass goddesses funneling perfume! During a mid-life renaissance the juice provides incentive for Carla to find her own niche.

One autobiographical aspect in my newest launch, AN ENLIGHTENING QUICHE, is the setting. Northern Rhode Island’s fictitious mill town of Beauchemins is based on the beloved community of Manville in the town of Lincoln, Rhode Island where I taught elementary school for 29 years.

Another autobiographical feature pertains to the fictitious Brulé Bookbinding Co. mill, whose operations are based on the labor-intensive jobs I performed working at Sidney-Higgins Bookbinding Co. for two summers during college vacation: collating, hole-punching, feeding the saddle-stitcher, and combing.

4. What’s the best compliment that you’ve ever received about your writing?

Honored to have received many compliments which I treasure, I’ll cite one of my most recent put forth in a review of AN ENLIGHTENING QUICHE by Joel R. Dennstedt for READERS’ FAVORITE:

“One cannot know if such writing comes naturally to the author, or if she suffers from the agony of meticulousness required to produce such an exquisite work. The end result hearkens to the classics for its resemblance to such deeply thoughtful plotting, characterization, and the gorgeous prose used in its exposition.” - Readers' Favorite

5. What has been your greatest moment as a writer so far?

Of all my greatest moments as a writer, one which I will single out is my unsolicited interview with TIME news reporter, Jeninne Lee- St. John. Conducted by telephone, she delved into the driving force behind my debut novel, UNDERLYING NOTES, shortly after its publication. (March 17, 2008 print issue): "Scents and Sentsitivity." - Time.com

While it remains to be seen if I can achieve my dream goal, I intend to pursue film adaptation of AN ENLIGHTENING QUICHE.

My alpha female protagonist, Augusta Bergeron, gave the nod for me to quote her:

“I can’t believe you’re planning on greeting the workers in jeans and a Harvard hoodie! They’ll see through your ploy and figure you for one condescending mother effer, as in give me an f for foreigner, shoving highfalutin H-a-a-h-v-ah-d up their craw! Think about it.”

8. What is the first piece of writing that you’ve ever had published? Where was it published, and what was it about?

Since I’ve already mentioned, UNDERLYING NOTES, the first piece of writing I’d ever published, it should be noted that shortly after the publication of my first novel in 2007, I sought creative ways to market and promote it. Because there are elements of the Sixties scattered throughout, I composed and submitted a Memoir to ‘The Sixties Official Site’—A Tribute to Twiggy.

The webmaster graciously invited me to become a regular contributor and offered me a featured page here. I took him up on his offer, and cruised along writing ninety-nine more Memoirs as well as numerous Retro 60 Flashbacks.

9. How long does it take you to write a book?

It took me a little over eight years to write my recent release, AN ENLIGHTENING QUICHE! More at stake than neglect, abandonment, or laziness—life’s hairpin turns and priorities negated progress by depleting my energy and stifling ambition. Nevertheless, when I could see my way clear, perseverance and determination got me to the finish line.

10. Who was this book written for?

The aforementioned book was written in memory of my cousin Bobby (Robert A. DiPetrillo), a Beach Boy fan with a cool head who got around and was real well-known for going the distance in furthering the best interests of his family. Wah wa ooo!

11. Quote from a positive review of your book.

“The author has infused this novel with heart and soul. There’s a swirl of mystery and sin and the telling is effervescent and clever. The book has everything going for it – exquisite writing and scrupulous storytelling.”

12. Summarize your book in one or two paragraphs.

Two headstrong women coming from different moral directions clash within northern Rhode Island’s French-Canadian mill town of Beauchemins, rife with secrets and scandals. Their narratives relate how an heirloom quiche recipe and baking rivalry expose misconceptions, misdeeds, and maliciousness which wreak havoc on those caught in the crossfire of a tragedy.

Buy a copy of An Enlightening Quiche here! 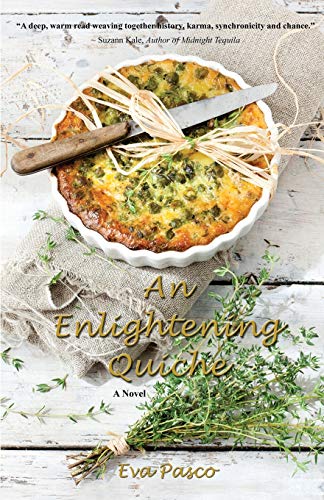