There is a misconception that children’s books are only for children, but children’s authors know that this is not true. A good book can be for anyone if the story, idea, or characters grab the reader.

Suzi MacDonald’s books are stories that I would read, not just as a child but as an adult. After all, children’s books are written by adults. Some may say they are adults who never grew up, but I like to think of it as adults who just keep one finger on childhood to bridge the gap between worlds, giving them the knowledge to write well and the imagination to write for their target audience. Below is my interview with MacDonald.

I’ve written two children’s books: Taggie’s Remedies, about a little girl who discovers her mother is a witch with a secret past, and Cameron Grey and the Other-World Wide Web, which is about a girl with supernatural friends who travels to a magical world to rescue her parents from a wicked princess. I have also written two YA novels which are the first two installments of a paranormal adventure / romance series called The Cure, as well as adult novels. All of my books are available as ebooks on Amazon.

Mainly because children are so open to magic and unreality. Children inhabit a world full of imaginary friends and magical adventures, and it’s a privilege to create stories that can feed that level of imagination. With happy endings of course.

I began writing for children when my own children were small enough to still want stories on long car journeys or on camping trips. Taggie’s Remedies was born beside a campfire with bats swooping all around, and Cameron Grey is loosely based on games we used to play. I suppose the characters in Taggie and Cameron are based on my family, but I can’t claim that anything that happens in the books is based on reality! Except for witches, of course.

That the reader couldn’t put the book down – she had to finish it. That’s how I feel about my favourite books, so it was gratifying for someone else to say that about something I’d written.

Actually, selling my first short story – it was proof that I was good enough to be a ‘proper writer’.

I create my own covers from photographs that I’ve taken.

My best friend (or so she says).

I’m currently working on the final part of The Cure trilogy, because I want to find out what happens to all the characters – watch out for it early next year – and I’m also working with an editor on an adult book.

There are two quotes about love that come to mind, both from The Once and Future King by T H White, which is still one of my favourite books.

"Now, in their love, which was stronger, there were the seeds of hatred and fear and confusion growing at the same time: for love can exist with hatred, each preying on the other, and this is what gives it its greatest fury."

"Cavall came simply, and gave his heart and soul."

For me, the first quote is about passion and destruction, which is of course the outcome for these particular lovers; and the second is about a love that is pure and unconditional and perhaps unattainable by complicated human hearts that can only aspire to it.

Buy a copy of Cameron Grey and the Other-World Wide Web here! 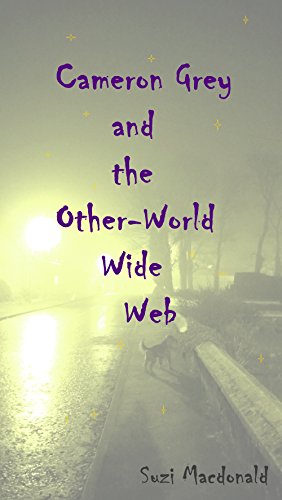