Whether this was intended to be the last installment in the Chocolate Covered Mysteries is hard to say, since the ending is left open.

Anyway, in this installment, Michelle and Erica are getting ready for the Halloween festivities in West Riverdale when one of their younger employees, Dylan Fenton, is accused of the murder of Faith Monette.

Dylan, who's a high school student, has been having a hard time lately since his parents divorced and his mother moved to Florida with the high school soccer coach. He'd been skipping school to avoid comments by his classmates and with working at Chocolates and Chapters, he's also been able to keep up with the latest comic books that have delivered,

The police found a key ring belonging to Dylan at the scene of the grisly murder (which by crimozy standards was pretty brutal) and now the crime solving duo are out to clear Dylan, but will his friends be able to help him as well, or are they covering something up that proves Dylan is actually the killer?

One of the good things about this installment, is author Kathy Aarons delves into the world of catfishing, something that I haven't read in past cozies. She does an excellent job of how Faith created multiple accounts and even though Faith is dead, she manages to bring her back to life when the girls are questioning various people (who knew the deceased under different names).

But, for everything positive, there has to be a negative and as with the first two installments, there are too many characters introduced early in the story, and then throughout a few more are sprinkled in. Some of the characters are never heard from again, which can be confusing.

Overall, the flow is good and again, I know that there's something missing, but again, I could not put my finger on what it was. I think Aarons was trying to add some comedy into the story (the character of Reese Everhard has been the one stand out throughout the series and does come across as comic relief) but when she tries to put other characters into comedic situations, it sort of falls flat. There are a few good one liners, but the characters are really too serious.

Unfortunately, too, as you're reading, you might get a craving for chocolate and as in the past, there are a couple of chocolate recipes at the end, but not enough to satisfy the sweet tooth that's been building in your mouth. 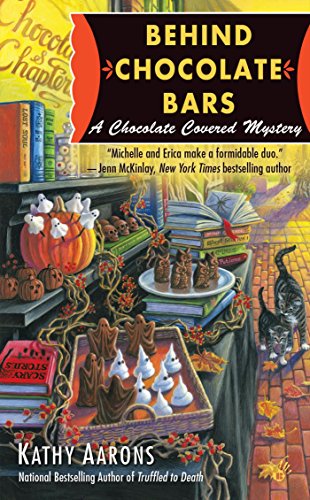