Darkfever begins with twenty-two year old Georgia native MacKayla Lane learning of the death of her sister, Alina, who went to Ireland to study at Trinity College in Dublin. When the police can't find any leads and the case is closed, Mac decides to go to Ireland herself to pursue the one somewhat dubious clue her sister left: a cryptic message telling Mac that she had been deceived, there was something they needed to find, and that Mac didn't even know what she was.

Upon her arrival in Ireland, Mac discovers that what she is, is a Sidhe-seer - someone who can see faeries, both light (Seelie) and dark (Unseelie). As a Sidhe-seer, she's able to see through the glamours (disguises) that the Fae use to walk among regular people in the regular world. The object that needs to be found is the Sinsar Dubh or "Dark Book" - an ancient faerie hallow of immense power. When Mac encounters rich, mysterious Jericho Barrons, owner of Barrons Books and Baubles, and discovers that he too is a Sidhe-seer - and possibly more - the two work together to find the Sinsar Dubh before the Fae get their hands on it and create hell on earth.

What I thought of Darkfever

This book didn't quite live up to its potential in my opinion. The basic storyline is good, and the different kinds of Fae - not your typical fairytale faeries - are interesting and unique. Basically, there's no such thing as a good faerie, even the Seelie (the 'light' kind). What stops this book from reaching its potential is the main character, Mac. She's unambitious, with no goals in life other than to look pretty and stay tanned (which she talks about a lot through the entire book). She resents being compared to Barbie but with her long blond hair, big breasts, 'tanned shapely legs' (again, something she mentions a lot), the fact that almost everything she owns is pink, plus the fact that she's pretty much a ditz, it's hard not to make those comparisons.

One of her few redeeming qualities is that she obviously loved her sister very much, as evidenced by her willingness to leave her sheltered life in small-town Georgia and travel all the way to Ireland on her own to solve the mystery of her sister's murder. On the other hand, this also kind of proves her stupidity - traveling to a foreign country, alone, when she's never traveled before, and heading straight to the city where her sister was brutally murdered. If she had been a strong, independent, intelligent character, it would have been more believable.

There are also few redeeming qualities in Jericho Barrons. He's aggressive, obnoxious and even brutal. At first, his main way of dealing with Mac is grabbing her or shoving her around. Even after leaving her bruised from nearly crushing her ribs, this doesn't keep Mac away from him, or stop her from eventually developing a somewhat grudging attraction to him. His attitude toward her improves slightly near the end of the book, and he wants to keep her safe, but his reasons are self-serving. I'm sure that as the series continues, a romance will develop between the two, or if not a romance, at least a physical relationship. 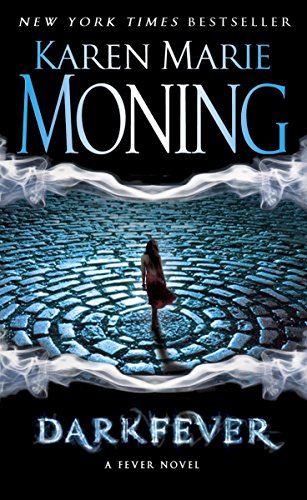 Call me curious, or simply a bear for punishment, but I'm going to read the second book in the series, Bloodfever.  I want to find out what happens, and being the eternal optimist that I am, I'm hopeful that Ms. Moning has put a little more effort into developing her characters, and that Mac will mature and grow into the type of strong-willed, determined person she needs to be to deal with her sister's murderer and the Fae, who are threatening life as we know it.

Thank you for reading Book Review: Darkfever (Fever Series, Book 1) by Karen Marie Moning.  If you enjoyed this article and found it useful, please vote it up, rate it, and/or leave a comment - you don't have to be a member of HubPages to leave comments. If you'd like to learn more about me and read my other articles here at Hubpages, you can visit my profile page. I love writing for HubPages, and would recommend it to anyone who's interested in writing online. If you'd like to join (it's free to join and a great way to make money online), you can sign up here.