I've been a fan of Janet Evanovich for a couple of years now.  I remember seeing her Stephanie Plum books at the library and being intrigued by the titles.  I wrote down her name to look her up and it was several months later before I finally did.  When I started reading the Stephanie Plum series, I couldn't get enough - I went through them quickly and then read everything else that Janet had written.

Wicked Appetite is told in the first person by Elizabeth 'Lizzy' Tucker, a baker who has just moved from New York City to the Salem, Massachusetts area after her great aunt Ophelia dies and leaves Lizzy her house. Lizzy works as a pastry chef at Dazzle's Bakery, and her specialty is cupcakes.

With the appearance of dark and mysterious Gerwulf Grimoire, aka Wulf, followed closely by his cousin Diesel, Lizzy learns that she has the ability to find certain empowered objects. Wulf and Diesel are what is known as Unmentionables - members of a sort of supernatural elite. Lizzy's power makes her an Unmentionable too, and Wulf and Diesel need her to find a collection of stones that represent the Seven Deadly Sins (pride, greed, lust, envy, wrath, sloth and gluttony). Only two people on earth can recognize the stones when they find them, and Lizzy is one of those people. If kept separate, the stones have no more power than causing the holder of the stones to take on the trait of the stones. If brought together, they have the power to unleash hell on earth. Wulf wants the stones so he can wreak havoc, while Diesel wants to return them to the higher-ups and prevent Armageddon.

The story that ensues is full of a cast of crazy characters, and a lot of mishaps for Lizzy and Diesel on their quest to find the stones and keep them from Wulf.

I personally enjoyed this book, but then I'm very easy to please when it comes to novels. After reading the reviews online, I was surprised by the number of reviewers who disliked, or even downright hated this book.

The overwhelming similarities between Wicked Appetite and the Stephanie Plum series

There are many similarities to the Stephanie Plum series - some say too many. The character of Lizzy is pretty much the same as Stephanie, except with a different occupation and she lives in a different state. These similarities are compounded by the fact that both the Stephanie Plum books and the Lizzy Tucker books are written in the first person. I'll admit there were times when I forgot I wasn't reading a Plum book - someone would call her Lizzy and I would think 'who?' Lizzy and Stephanie even dress the same, in jeans, t-shirts, sweaters and sneakers and have a penchant for emotional overeating.

Other books that Diesel appears in 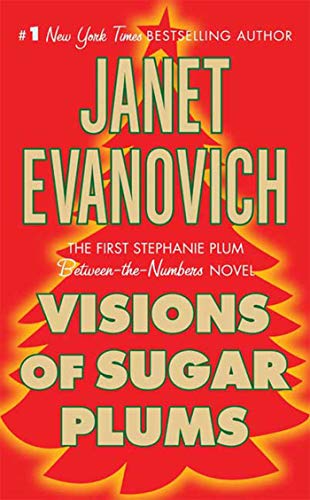 The similarities don't end there. If you've read the Plum books, you'll recognize Diesel from Visions of Sugar Plums, Plum Lovin', Plum Lucky and Plum Spooky, the Between the Plums books. Another familiar character is Carl the monkey, who made his debut in Fearless Fourteen and returned again in Plum Spooky. I enjoy return characters, I like the familiarity - it's like seeing an old friend again - but for many, it may be a bit too much, especially when the new characters and the storyline are almost identitical to Janet's other novels.

Diesel is one of those characters that I was anxious to come across again. He's charming and sexy in an untouchable way, and it's obvious that he cares for Lizzy despite his best efforts not to. The relationship between Lizzy and Diesel is very much like the relationship Stephanie Plum has with Joe Morelli and Ranger in the Plum books - the sexual tension, the innuendos, and that will-they-won't-they repartee that leaves you constantly wondering what will happen between them. Ranger and Diesel are both men of mystery with undeniable sex appeal. But the similarities don't end there - they can both get through locked doors, and both have cars replaced by mysterious means at the drop of a hat.

Another similarity between the books is in the sidekicks. In Wicked Appetite, the sidekick is Gloria 'Glo' Binkly, who works with Lizzy at Dazzle's. For Stephanie, it's Lula, the ex-hooker who works with Steph at the bail bonds office. Both are crazy, not-too-bright women who don't really contribute much on the job, and are always hatching hairbrained schemes and getting into messes that other people have to clean up.

If you're not a fan of silliness, I wouldn't recommend this book. For me, books like this are a godsend - as a writer myself, my mind is constantly whirring and humming - I'm thinking all the time and a book like this allows me to disengage, turn off my brain and simply enjoy a cute, funny story, laugh out loud and not think too hard. My mum, on the other hand, who is also a big fan of Janet's books, doesn't have a high tolerance for silliness, and although she enjoyed the book, I think she could have lived without the silly parts - whereas to me, it's those parts that made the book.

The idea for the plot is there - I like the concept of stones that represent the Seven Deadly Sins and what would happen if they were brought together, but the execution was definitely lacking. I can't help but think Janet would have been better off continuing with the Between the Plum series and having Stephanie help Diesel instead of creating a new but not-quite-new set of characters. I don't really see the point in creating characters who are so similar when she could have stuck with old favorites. The Between the Plum books are short, without a whole lot of substance other than pure entertainment, so the Wicked Appetite storyline would have worked well as part of the already-established series.

The characters in Wicked Appetite who held the keys to the gluttony stone took on the traits of the stone and became gluttonous in different forms.

I'll read the books that follow Wicked Appetite, because I consider myself a loyal fan of Janet Evanovich - I do find her books amusing, and quite honestly, I'm curious where the next book will lead. But part of me wonders if I'm a glutton for punishment.

I also have to wonder: after all the negative reviews this book has received, will Janet take a bit more time to develop her characters and plot in the next installment? Will she add in some new jokes and not recycle the same old jokes all over again? Will there be more originality and less of the cookie-cutter material that is starting to frustrate her fans? It'll be interesting to find out.

To learn more about Janet Evanovich and to see a complete list of her books, as well as play games, enter contests, have your questions answered, and learn about upcoming events and releases, visit Janet's official website.

Thank you for reading my review of Wicked Appetite by Janet Evanovich. If you enjoyed this article and found it useful, please vote it up, rate it, and/or leave a comment - you don't have to be a member of HubPages to leave comments. If you'd like to learn more about me and read my other articles here at Hubpages, you can visit my profile page. I love writing for HubPages, and would recommend it to anyone who's interested in writing online. If you'd like to join (it's free to join and a great way to make money online), you can sign up here.

I would definitely recommend Janet Evanovich's Stephanie Plum series to anyone who enjoys action, humour and sexual tension. I've read all sixteen books and the seventeenth installment is due out later this year. If you're interested, here are the first five to get you started.