Book Review: Invasion of the Ortaks: Books I - IV Summary

Invasion of the Ortaks is a book series by Sveinn Benonysson. This book consists of four titles: The Knight, The Defeat, Rebellion, and Brutal Force. The story revolves around six kingdoms in Esthopia and the many threats that aim to claim them. The kingdoms are Eniktronia, Montania, Serpenia, Antonia, Otanga, and Hergia; these kingdoms are also ruled by six kings.

More than one hundred peaceful years in the land of Esthopia has come to its halt because the Ortaks are determined to rule, but there are more evil forces that surround Esthopia; outlaws, demons, vargs, necromancers, and dark elves. Despite the darkness that befalls, heroes and heroines in the form of queen, princess, prince, knight, soldier, merchant, elf, and ordinary people are loyal to their ruler and country. Together, they form a strong army that hail from different parts of Esthopia to protect the wonderful world of Esthopia.

Book I The Knight is the introduction to the fascinating geography of Esthopia and its compelling characters. The war hasn’t begun but every chapter has a surprising incident or backstory. The characters are diverse and not limited to humans; mythical beings exist which makes the story more captivating. To describe it in one word, it is MAGICAL.

Book II The Defeat puts an end to more than one hundred years of peace in the world of Esthopia. It is the beginning of war, but this is also where Serpenia, Montania, and Eniktronia unite to defeat the Ortaks as they battle at Broad Valley. To simply describe it, it is FAST PACED.

Book III Rebellion is my favorite amongst the four. It has more heart-warming moments, more violence, more suspense, more focus on characters, more development, and more compelling events that make it very hard to put down. I couldn’t think of just one word to describe it when I made a separate review focusing on just one book, but now I’ve finally found the right word to describe it; it is GROUNDBREAKING.

Book IV Brutal Force is where the gruesome reality of war kicks in; violent deaths and sexual assaults transpire on different parts of Esthopia and the forces of evil are becoming bigger and stronger with Ortaks, demons, vargs, necromancers, and dark elves aiming to conquer and dominate both human and mythical world. Ortaks are out to destroy humanity, while evil creatures have united from the Underworld to attack Alfheim, the world of elves. To describe this book in one word, it is WICKED.

I highly recommend Invasion of the Ortaks: Books I-IV to all fantasy lovers though my recommendation is limited to mature readers due to violence and sexual assaults. Overall, I am rating it 5 out of 5 stars. It is magical, fast-paced, groundbreaking, and wicked. Check out the author’s website at https://www.sbenony.com where you can get more details about him and his books. You’ll be surprised that this phenomenal book series doesn’t end with the fourth book – there are more books to enjoy! 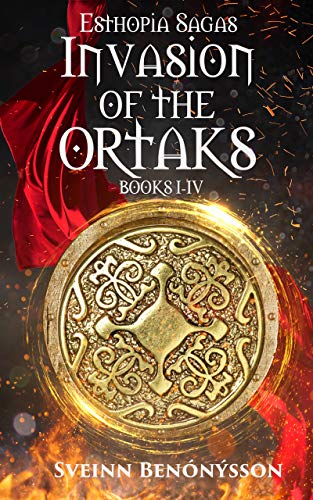