Book Review: Lions and Tigers and Murder, Oh My by Denise Swanson

With this series ending, it's hard to say whether it ended on a positive or negative note. It's debatable.

If there's a positive side, the series evokes memories of getting excited to go shopping at your local dime store. How the memories came flooding back in all their glory.

On the negative side, you have to ask yourself if Deveraux's love triangle ended on a positive or negative. Did she pick the right man for her (after six installments, I wasn't really into the romance part of it since I was fine with her dating two totally opposite guys)? With that conclusion, I don't think we'll ever know.

But, in this installment, a wealthy philanthropist (Elliot Winston) has his sight on opening a wildlife refuge for abused and neglected animals, but his wife Gabriella, has her reasons for not wanting to be a part of it and after an argument disappears.

Elliot hires former U.S. Marshal Jake Del Vecchio (now turned private investigator) after the police won't help him find her. Jake, has just set up shop in the office space of Dev's second floor dime store. He asks her if she'd be interested in helping him with the investigation. Of course she can't turn him down.

But Dev's plate is full since she's close to making that important decision regarding her love life (Jake or Noah, or Noah or Jake) and trying to help mend the rift between her best friend Poppy and her dad.

Situations like this make the series worthwhile since nothing was done a a grand scale. With the exception of the fourth installment where I think the series veered into the too much cozy formula.

What's great about the entire series, is Dev isn't your typical cozy character. She's not a tiny woman and doesn't let the naysayers get her down. Many of the small characters throughout make reference to her weight, but, she is dating two men which make them just a little jealous.

Overall, I think this is a good series to get involved with and I think you'll have fun with it. I'm not sure if this is a spin off of Swanson's other series, Scumble River Mysteries, but a sweatshirt in Dev's shop does mention Scumble River High.

Maybe Dev will make an appearance in one of those novels. 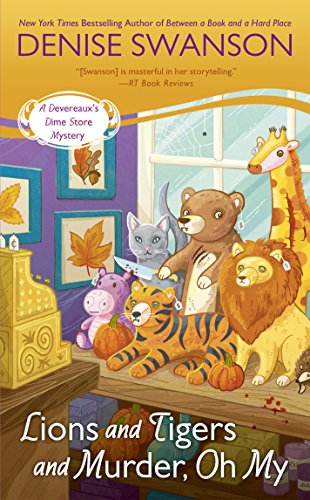