Book Review: One Potion in the Grave by Heather Blake

With only three installments in this series, it's hard to say if it would have become popular among crimozy readers.

While Heather Blake is popular in the genre, this series tends to take a backseat to her Wishcraft series which by all means is much better and well suited for her writing. That series is enchanting, whereas this series is sort of run of the mill and too formulaic.

The town of Hitching Post, Alabama is excited for the upcoming Calhoun wedding and when Carly Bell Hartwell's longtime friend, Katie Sue Perrywinkle (now known as Kathryn Perry) slips into town, the festivities of the wedding will be overshadowed by the murder of Katie Sue. Of course the reason is why was she murdered and what dirt did she have on the powerful Calhouns?

Before her death, Katie Sue had fulfilled her life's dream of becoming a doctor and had parted ways with her family, but now that she's back in town, she wants to see her baby sister, Jamie Lynn, who's dying of an unknown disease. Katie Sue wants to set things straight between her and Jamie Lynn, but the Perrywinkle family seems to pop up making it hard for the two to get together.

On the eve of the wedding, Katie Sue clings to life as the bride to be, Gabriella Greenleigh comes out of the woods drenched in blood claiming that she was trying to help Katie Sue up the bluff known as Lover's Leap outside of Carly's mother's wedding chapel.

With the death of Katie Sue, Carly is running out of time while searching for an envelope that has all of the answers that will surely bring the Calhouns down.

As in the first installment, what drags the story down is the number of characters. It's loaded with far too many and it's easy to become distracted by them. I tried to count them, but there are close to twenty (if not more) and some only appear in brief sentences. This is the main distraction.

However, the story itself is good but another factor is I kept forgetting that Carly had her own potion store. It would have been good to get to know the layout of Carly's career and to get more of a sense as to how she makes her magic potions. While her potions aren't meant to cause harm, her cousin Delia makes the opposite. It would have been good to see some type of inner struggle as the cousins are finally learning to like each other.

Overall, it's not a bad series, but maybe one that really won't keep you guessing as to who the murderer is, but by all accounts, it is well crafted and should hold your interest. 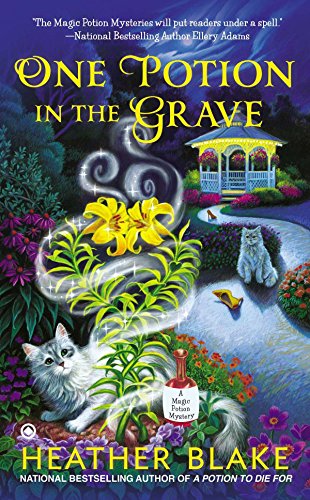 One Potion in the Grave (A Magic Potion Mystery)
Buy Now