In almost every crimozy series, there has to be an installment dedicated to a beauty pageant and unfortunately, here it is. At least it was early in the series.

On a dare, goth shampoo girl, Rachel decides to enter the Miss Magnolia Blossom Pageant and shocks the staff of Violetta's since it's something non of them would ever expect in their lifetime. But, with Rachel, they never know what to expect.

When organizer Audrey Faye comes into the salon looking for stylists, Grace Ann Terhune jumps at the opportunity as does the manicurist, Stella Michaelson, but she's a little apprehensive about working on the pageant. And Stella has good reason to be hesitant, since unbeknownst to her fellow co-workers, her unemployed husband has been having an affair with Audrey.

On the night of the talent show, Audrey is found murdered in the area where Stella had been doing nails and the murder weapon belonged to her. Earlier, she had been scene arguing with her husband and it had gotten out about the affair, but, now Stella's missing and she's the prime suspect in the murder.

Meanwhile, outside the theater, protestors are busy trying to shut down the pageant, while aesthetician Althea Jenkins is hiding the fact that she's been dating the organizer and college professor, Dr. Kwasi Yarrow. Kwasi also starts to get Althea interested in her African heritage.

With all of the drama of the pageant, it's time for Grace and the girls from the shop to investigate Audrey's murder and clear Stella's good name before someone else is killed.

As with the first installment, Dare has kept up the pace of the first installment and reminds the reader of the past as this installment takes place in the summer, whereas part one was set in the spring. Dare also does a great job of regulating your body temperature too with the dog days of summer. It's supposed to be hot and believe me, you can almost feel the heat.

The characters are great fun and at no time does Dare try to get you to either like or hate them. They're all even keeled, well, of course you do have the stage mothers in this and the over the top Audrey, but, as a whole, you'll enjoy the characters and of course the week long pageant drama.

Again, this is a fun read and for the most part, I don't think you'll get bored. In fact, you'll want to try and spend as much time with these characters as possible, so pull up a chair and relax. 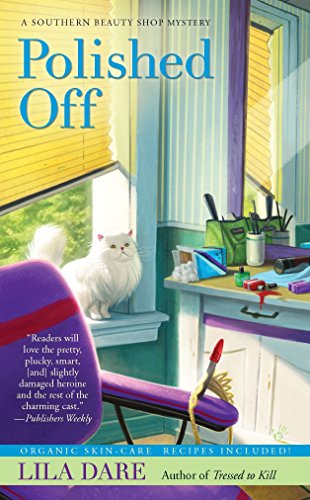