Police women, forensics investigators, and medical examiners are more common place in the 2010s than they were in the 1910s. Mystery and suspense writers have helpd to mae that possible by presenting women as major characters in their work. James Patterson is a writer who continues to do so.

This is my review for the James Patterson mystery novel called The 6th Target, a story that to me, could be called "The Case of the Missing Bullet", ala Perry Mason and Della Street's case file system.

I enjoyed this murder mystery very much. I have thus far liked it better than the TV series that began as The Women's Murder Club. I would have liked to have seen Lucy Liu involved in the series. Waiting a few seasons, I found her on Elementary as Dr Joan Watson to a modern Sherlock Holmes.

5 stars for The 6th Target

This is the 6th installment of the popular "Women's Murder Club" cases set in San Francisco. This female club includes Lindsay Boxer, the SFPD detective, Cindy Thomas, the newspaper reporter; Claire Washburn, the Chief Medical Examiner for San Francisco; and Yuki Castellano, the prosecuting attorney formerly of a private practice specializing in white-collar crime defense. When not solving crimes together, the four women share Mexican food at a place called "Susie's."

In The 6th Target, Lindsay Boxer is going through quite a number of personal changes as she solves several crimes. Her career position is going up and down the ladder, as is her long-distance relationship with fiancé-boyfriend-something Joe.

Joe lives in the Washington D.C. area and is involved with Homeland Security, so he understands the pressures of police work. Lindsay and he have equally high profile and high stress jobs and are both are divorced, with bad leftover baggage.Thy have a lot of things to work out and not enough time to do so.

Lindsay also has a new male partner with a potential for a new relationship there in the future of things do not work with Joe. In addition to all of this, Lindsay's best friend nearly dies of a gunshot wound. All this activity is more than Lindsay can digest at times, so we read some bittersweet passages, thoughts of regret, and aches of missed opportunity throughout the book.

On a Ferry Ride

In this story, on a ferryboat ride in the bay, several people are shot or killed by a potential madman with a gun that he calls "Bucky."

One of these individuals is CME Claire Washburn, nicknamed "Butterfly" for her tattoo, and Lindsay's best friend. Claire's second teenage son Edmund is almost shot as well, but escapes when Bucky's 6th round goes wild.

Edmund chases the shooter ashore, to the terror of Lindsay, who chases after him in turn. The shooter disappears.

Homeless, hearing voices, and later seeing Lindsay on TV asking for clues about the shooter, the lunatic that is Bucky's friend feels Lindsey is speaking directly to him, so he turns himself in at her house.

The perp is also a perv and the Japanese-Italian Yuki has the chance to prosecute him when her boss in the DA's office has a heart attack over dinner.

All through the ensuing trial, there is the unasked question: Where did Bucky's 6th round of ammunition go on the ferryboat? The answer does not appear until the end of the tale and it is a serendipity of justice. 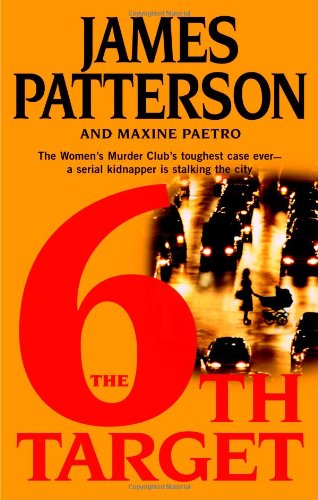 Meanwhile, little geniuses are disappearing and their nannies are being murdered. No ransom notes are delivered and no other demands are made except those of mysterious phone calls instructing the parents never to try to find their children again.

A series of five-year-old prodigies in music and mathematics are abducted via a twisted scheme of child trafficking through a traveling nanny agency that opens in one city, closes up shop hurriedly, and then reappears in another city across the North American continent with "different" owners.

Lindsay and the club solve this set of crimes as well.

The compact chapters in this book moved quickly from scene to scene, allowing me to read the book in short order, with plenty of places to take a quick break as well. I never felt that I had to drag on to the end of an overly long chapter and this was refreshing in itself. The crimes depicted in the book are believable in this day of serial killers and seemingly quiet individuals who suddenly "snap" and destroy people and property around them.

The subplot of the disappearing child prodigies was fresh and interesting as well. Both this and the major crime on the ferryboat stemmed from abuse of children, which the major characters like Lindsay Boxer swear to fight until there is no more, and which America needs to more fully prevent.

The topic is timely and important. In the context of The 6th Target, the topic is handled well, without a preponderance of harsh language, and is therefore more thought provoking. The plot and subplots of this book linger with me and I anxiously await the next book in this series. I would recommend The 6thTarget to mystery lovers and fans of police departments, San Francisco, and interesting female characters.