This is one of five books in the Charlotte Adams series, by Mary Jane Maffini. Here are all the titles, in chronological order:

Charlotte is a professional organizer who lives in upstate New York, in the same small town where she grew up.

Charlotte moved back to Woodbridge after having lived in New York City. It's great to be back among her old friends from high school. 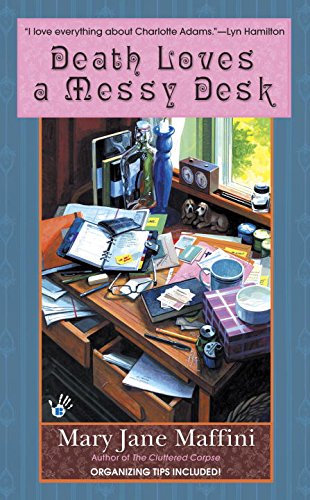 Charlotte Takes Truffles and Sweet Marie to the Fair With Her ~~ Is That Fair To the Other Fairgoers?

Pepper and Nick Monaghan are both cops.

Pepper has always believed --- since their high school days --- that Nick had a "thing" for Charlotte. Pepper is mean and rude to Charlotte.

The truth is that Nick has always been a philanderer. He won't leave Charlotte --- or other women --- alone.

For the first time in this book, Pepper treats Charlotte decently, and actually helps her out with some inside information.

Unfortunately, though, some of Charlotte's other friends seem to have abandoned her. They're never available when she needs them.

References to a Traumatic Experience in _The Cluttered Corpse_

The people at the fair recognize Charlotte, Truffle and Sweet Marie from the newspaper. It has to do with the crime in The Cluttered Corpse.

I read The Cluttered Corpse when it first came out, but I don't remember much. The victim was a lady who collects stuffed animals.

I do remember Charlotte's high school friends, Nick, Pepper, and Jack, though. Then, there's Sally, now a mom with four kids, and Margaret Tang.

Of course, every amateur sleuth needs an old friend who is now a reference librarian, like Ramona.

There was also a "mature" former hippy, with a long braid. She wears tie-dye. She's the waitress at a local diner.

I'll have to re-read The Cluttered Corpse again before I post a review. I never write a review when the book is stale.

The Woodbridge League of Therapy Dogs

The Woodbridge League of Therapy Dogs.

Charlotte thinks that might be the perfect solution, to help Truffle and Marie "get over themselves".

And, help her get over being so fearful, after that last trauma (i.e., the one in The Cluttered Corpse). She applies for the League.

A lady at the fair who seems to be involved with the Volunteer Dogs program would like to know if Charlotte can help someone in the office of Quovadicon who keeps a very nasty desk.

Charlotte tells the story in the first person, so we get a nice, stable point of view.

I like Maffini's writing. It's never intrusive. It made me feel that I was going along on this adventure with Charlotte.

Charlotte does things that might seem crazy, but Maffini makes them seem completely plausible. Charlotte explains it, and I just got carried along.

It's intelligent, aware and witty. Here's what Charlotte has to say about a former high school friend who is now a local news anchor:

Todd Tyrell's gelled hair and supersize ultrawhite chompers filled the television screen. He babbled on about a threat to our community and the public's need to know. I've learned from personal experience how easily WINY can get things wrong. I thought the public had a right to peace and quiet.

Or, this, when she goes to visit the Quovadicon office:

I mention those heels not only because I am a shoe lover, but also because she would have been six feet tall even without them. She didn't really need the shoes to attract attention. Her leopard-print miniskirt would have done that on its own, or perhaps the tank top barely containing a surgically enhanced bosom could have carried the day. I wouldn't have wanted to foot the bill for her tanning sessions, let alone those hair extensions. She'd definitely dug herself a trench to stop the march of time.

This book was difficult to put down, right from the start. Charlotte is at Woodbridge's Second Annual Volunteer Awareness Fair, with Truffle and Sweet Marie, her two rescue wiener dogs (Dachshunds).

Truffle and Sweet Marie are not the most well-behaved dogs at the park. They lunge, jump, bare their teeth and bark.

Charlotte Is Hooked, Despite Her Efforts Not to Get Involved Personally

Charlotte is reluctant to help out with the messy desk problem.

Finally, she agrees to visit the office only on the condition that the messy desk person doesn't know what it's about. They have to disguise the intervention as a general organizing visit.

Charlotte has to therefore, give advice about all aspects of the office and all the desks, layout, workspace --- everything.

Which she enjoys anyway.

There's one nosy worker who consistently walks across the room to use the copier. (Yes, it's the one with the hair extensions, fake tan and leopard-print top.) Charlotte suggests the copier should be moved closer to this person's office. That will cut down on the walking and the snooping because there will be no panoramic view of the office from the copier.

Charlotte never actually gets to meet Barb Douglas, the person with the messy desk.

She appears to have gone home for the day --- for no apparent reason. But, when Charlotte visits Barb's home, the door is ajar, and her beloved indoor cat is wandering the neighborhood.

There were news reports about a guy's body found in the trunk of a car. Charlotte watches the news report of this crime. She sees a woman in the footage whose face matches the face of someone who had run her off the road. She believes this woman might be Barb Douglas.

Each chapter heading has an organizing tip before the chapter number.

The tips are not shabby at all. They are things I've used already, just from this book. I really like reading about organizing. It's a big problem for me, and I'll probably never be able to afford a consult with a professional like Charlotte.

These chapter heading pages are very attractive, with little matching motifs before the tip, which is in italic typeface.

The first chapter tip is: "Position your desk so your back is never to the door. This aids concentration, and it just might save your life."