Bon Jovi has many popular songs. However, Wanted: Dead or Alive is on the upswing once again. This song is the theme song to Deadliest Catch, a television show brought to us by Discovery Channel. The series follows life on "the vast Bering Sea" aboard five or more crab fishing boats. During the series, viewers have come to know the four featured vessels: Cornelia Marie,Wizard, Northwestern and the Time Bandit. Viewers, like myself, have come to know and love the men aboard these vessels. We laugh at the pranks they play on one another, we grab the armchair and grit our teeth as each wave washes over the deckhands heads and we cry as another life is lost to the sea.

Thanks to Discovery Channel, Bon Jovi's Wanted: Dead or Alive has become the theme to one of the most watched and most loved documentaries of our day. 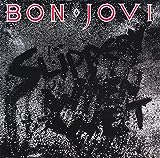 It's all the same, only the names will change

Everyday it seems we're wasting away

Another place where the faces are so cold

I'd drive all night just to get back home

Sometimes I sleep, sometimes it's not for days

And the people I meet always go their separate ways

Sometimes you tell the day

By the bottle that you drink

And times when you're alone all you do is think

I walk these streets, a loaded six string on my back

I play for keeps, 'cause I might not make it back

I been everywhere, and I'm standing tall

I've seen a million faces an I've rocked them all

I'm a cowboy, on a steel horse I ride

I'm a cowboy, I got the night on my side

And I ride, dead or alive

I still drive...dead or alive