Discover Harold Adams, the mystery writer who stirred the dust

He was a bum

Carl Wilcox would be the first to tell you he was a bum. An ex-con who was homeless, a drifter, a drinker and eventually called the murder man, might earn the bum label. Harold Adams created Carl Wilcox and placed him in the 1930s, as the depression was gripping the country, smothering rural America. Banks were foreclosing on mortgages, forcing home and farm sales. Many of these banks were having their doors closed because of ill-liquidity, leaving savers strapped. Jobs were drying up with the economy. Lives were drying up in the dust bowl.

Harold Adams places the town of Cordon in South Dakota, paints it the dreary beige of the dust, fills it with people who endure as much as they live, and then lets Carl Wilcox drift in after being released from prison. Carl gets a room in his parent's boarding house and does odd jobs to help out. He's casual, but cares about people. He's aimless but not irresponsible. He's a wise guy, tough guy, but not a bully. He stumbles as casually into a murder, as to a widow's arms. His knack for resolving the murder in the first few books eventually earns him some respect in surrounding towns as a man who can figure out murders - a murder man. As the series progresses he becomes just a little more rooted, develops a profession, of sorts, as a sign painter, but continues to wear the aura of the lay about, the underachiever, the bum.

Harold Adams is one of those writers who are able to create a sense of time and place with a few words. He doesn't use endless details to paint the picture. His spare books let the story and characters blow the dust over you, make you weary with the day's effort, and somehow lets the hopefulness of the human spirit leak through.

Harold Adams was born in Clark, South Dakota, ended up in Minnetonka, Minnesota. In his pre-writing career he was the Operations Manager at the Minneapolis Better Business Bureau then spent over 20 years as the Executive Director of the Minnesota Charities Review Council.

I like his books because they create a sense of time and place. They stories are good, but the writing is better. You don't so much escape, as drift into South Dakota in the 1930s. I wouldn't want to live there, but such a terrific visit!

This is a great series, and one where the protagonist, Carl Wilcox, develops over time. So if you are a series reader, find and start with the first book, Murder.

If you want to jump in and sample, then try The Man Who Was Taller Than God. A great read. 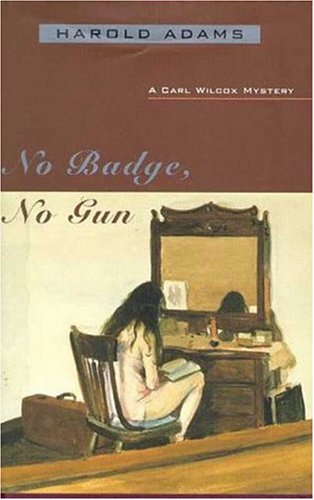 Books by Harold Adams are out of print (and collectible), as hard covers. Most have been reprinted as trade paperbacks. Check your library. Check the links provided. Great bargains exist!

There are many more terrific mystery writers whose names may not be on the NY Time's list, but deserve to be on a mystery reader's list. Discover Mystery Authors is a HubPage with a sneak peek at many more author's that you should check out!

Have you discovered Harold Adams?