This is an old but good book – I say. Published in 2006 and became a best-selling memoir of a woman’s breakdown and recovery in four different countries. I say four because America was a big part of this book.

Which book do I wish I had written?

I enjoyed reading this book so much so that I wanted to be the one who wrote about Liz eating, state of the art, gelato on every street corner of Rome and literally every morsel of world-class pizza in Naples – Italy.

The one to have written about Liz trying her awkward hand at the “Guruguta” – an ancient prayer in a holy Ashram somewhere in the bowel of India.
I wanted to be the one to have written about Liz falling in love with Filipe – the Brazilian, older lover in Bali, even if I knew what their fate would be – because I read the end well before I read the start (kind of a spoiler – I know, I also hate that about me sometimes).

I’m not saying that I am not happy with my own experiences of eating equally tasty Ben and Jerry cookie dough ice cream on the streets of Essex – courtesy of Marks’s; cultivating my own prayer rituals right in the center of my own living room whilst working on my own work-life balance and not forgetting the one I fell in love with.

Liz was searching for something. Happiness? Maybe. You see, I think happiness comes in all shapes and sizes. – An observation I’ve made – I’m not claiming to be a guru on happiness, but the way I see it – Unlike “grace” – Gods “grace” I mean, that is cut from only one cloth, “Happiness” is cut from many different cloths and comes in all manner of color and aesthetic. Its like one can literally go shopping for “happiness” and browse the rails and pick it up and try it on. If you like you some “Velvet Happy or Crushed Silk Happy”, then go get yourself some! Another good thing is you can go shopping by car, train/subway, bus or even horse and carriage if you must – it doesn’t really matter how you get there. This is also the point where I tell you that you might want to refer to other works of “happiness” gurus to get a more balanced view – for me, I am my own “happiness” guru!

What I’m really trying to say is that everyone’s “happy” can look so different on the outside, but on the inside, I bet an x-ray will show an internal rainbow of the most beautiful and brightest colors in each and every person. So the moral of this is – just because my “happy” doesn’t look like yours, don’t assume that I’m not in a place of happiness. – Phew! That wasn’t so complicated, was it?

Contrary to a lot of reviews on Goodreads – which were quite slanderous and it’s safe to say that some readers are a mean lot – the one thing I really loved about this book, is that it was really, really honest and really, really shocking in some parts – honest enough to make this short, southern African belle cry and laugh and shocking enough to make me disagree – totally – all in one sitting.

What religion should you be?

Ummm… I could also swear that the religions of this world have so much in common – rituals, prayers, demands, confessions upon confessions, meditation styles and a “God” yet also have one thing less common – Jesus. I really loved what “Ketut” – the Indonesian medicine man said to Elizabeth when encouraging her not to forget to practice both Indian and Balinese meditation because though different, were equally good for what they are purposed to do. Ketut also told Elizabeth not to argue about God with another person, but rather listen to everything this person is saying about God and say “I agree with you”, then go home and pray the way she wants to pray. Ketut was right… This could be the best way for people to have peace about this thing called religion – and quite frankly, people will maybe have more time to cultivate a personal relationship with God.

Everyone has a monopoly on their own opinions, right? So…in my opinion Elizabeth Gilbert is one of my best literary voices. Dare I put her right close to Paulo Coelho on my bookshelf? I think I’ll probably just do that.

If you’ve read this book, tell me what you think. If you haven’t, get it and read it on Amazon. This book also made it to the movies.

Eat, Pray, Love: One Woman's Search for Everything Across Italy, India and Indonesia 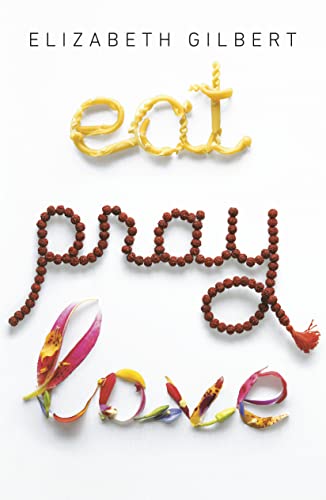 Eat, Pray, Love: One Woman's Search for Everything Across Italy, India and Indonesia
Buy Now