In 1597, composer and music theorist Thomas Morley published a slim volume called A Plaine And Easie Introduction To Practicall Musicke. It was a modest commercial success, going through three editions before changing musical styles rendered it a well-regarded relic.

But its influence continues today; Morley had created a new kind of music theory, eschewing lofty speculations about the ‘music of the spheres’ in favor of a clear and comprehensible exposition of “practicall” music theory—one not ashamed to say that it “teacheth to sing.”

A Plaine and Easie Introduction to Practicall Musicke: Set Downe in Forme of a Dialogue Divided Into Three Parts (Classic Reprint)
Buy Now

Needless perhaps to say, there are many differences between Morley’s book and Dr. Andrew Weaver’s latest offering, Generation Us: The Challenge Of Global Warming. Yet despite a very different topic, form, language and style, Dr. Weaver, like Thomas Morley, has combined formidable scholarship with clear and succinct exposition, and with a ‘stripped-down’ approach that focuses firmly on essentials.

This "plaine and easie" quality is evidently no accident; Generation Us is part of a series called “Rapid Reads,” from Orca Books. Rapid Reads are meant to be readable in one sitting, and “are intended for a diverse audience, including ESL students, reluctant readers, adults who struggle with literacy and anyone who wants an high-interest quick read.” Generation Us also evidently focuses on young people; it would be very appropriate for high-school students, and even precocious middle-schoolers.

Dr. Weaver's book certainly delivers on the "Rapid Reads" promise. At 117 pages and under 20,000 words—most of them carefully chosen from English’s ‘core vocabulary’—it can indeed by read at a sitting. (For the record, this reviewer took about an hour an a half to polish it off.) Its organization is likewise straightforward--particularly by contrast with Dr. Weaver’s admirable Keeping Our Cool, which tended to veer back and forth among related topics. 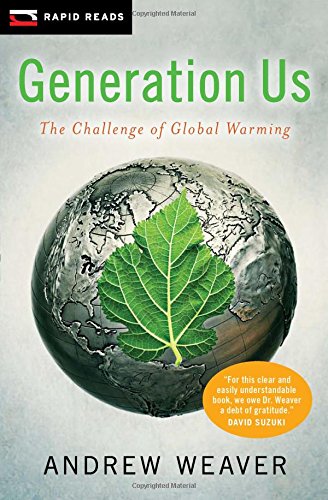 Generation Us is divided not into chapters, but into three large parts: following a succinct introduction, Part One describes the hows and whys of today’s changing climate; Part Two lays out its probable effects upon humans and our environment; and Part Three outlines some of the societal changes that will enable us to meet the “Challenge of Global Warming.” The book concludes with a brief and surprisingly hopeful peroration entitled “Embracing Change.”

Part One can itself be divided into three unequal parts. The first consists of three sections setting forth some physical basics: conservation of energy and Earth’s energy budget, the basics of the greenhouse effect—Dr. Weaver keeps this simple, using the well-worn ‘blanket’ analogy (which, though functionally apt, draws fire from some as not clearly reflecting the actual physical mechanisms involved)—and the various greenhouse gases.

This is followed with a section discussing the shares of total GHG emissions contributed by specific nations and specific industries; and one explaining how climate models work, and how they enable us to attribute observed warming to human emissions. (Dr. Weaver is on his home ground here; he is one of Canada’s leading climate modelers.)

Part One concludes with discussions of the observed warming (“Things Are Heating Up”); of the fact that warming will continue for a very long time (“Warming Takes Time”); of the fact that “Sea Level Is Rising”; that “Precipitation Patterns Are Changing”; and that there are now many “Ecosystems In Trouble.”

None of this means that life will cease to exist on Earth. Life has flourished over most of its history and especially over the last half billion years. Earth has also previously undergone a number of life-crippling extinction events associated with asteroid impacts or decades of massive and sustained volcanic activity. But more often than not, the life that reemerges after an extinction event is quite different from the life that was present before.

Part Two introduces the ideas of intergenerational equity—the issue that our present actions are creating consequences which will affect our descendents much more than us ourselves—and the “Tragedy of the Commons”—the mismatch resulting from situations where consequences (like climate change) are shared but sacrifices (like spending to reduce carbon emissions) are individual (or national.)

From there, Dr. Weaver considers the effects of climate—past, present and future. Affected areas include health, ecology (we get a section on “Ecosystems In More Trouble”), the climate itself, and global security (an issue treated at book length in Gwynne Dyer’s Climate Wars .)

The conclusion looks at the non-climatic advantages accruing from emissions mitigation: the elimination or reduction of air and noise pollution, acid rain, deforestation and soil erosion. Part Two ends with a reprinted editorial cartoon asking plaintively:

“What if it’s a big hoax and we create a better world for nothing?”

The focus of Part Three is on action—it’s titled “What Can I Do About It?.”

It considers factors both directly relevant to climate change (“Putting A Price On Greenhouse Emissions” or “Meeting The Two-Degree Target”) and those somewhat wider in focus (“Get Out And Vote,” or “A Change In Behavior”.)

(Not that it's not “Behaviour”--though Generation Us has an identifiably Canadian perspective, its spelling adheres to American norms.)

Most insightful for this reviewer was the section entitled Fighting For Change. Dr. Weaver makes the point here that traditional ‘oppositional’ tactics are not sufficient and will be even less so in the future:

It’s relatively easy to mobilize large groups of people against aparticular initiative. Let’s suppose a municipality wants to install a few windmills on a local hilltop. Local council might want to produce enough electricity to power their municipal operations. You can easily imagine groups of residents protesting. . . But where will support for the windmill project come from?

. . . no matter how we produce electricity, there will be an environmental footprint. It’s important to recognize this and try to ensure that the footprint is as small as possible. Environmental organizations need to switch their tactics [and] learn how to advocate in support of renewable energy projects.

The final word of Generation Us is the succinct essay—I call it that, for it could stand on its own—Embracing Change. In it, Dr. Weaver gets to the heart of the attitudinal shift he advocates. He begins with a stern assertion about what the science is telling us:

Of course, there is, and always will be, scientific uncertainty. But this uncertainty is about how global warming will manifest itself on the local scale. It’s not about whether or not glaciers, permafrost or sea ice will melt. No is it about whether or not sea levels will rise. Or whether there will be an increased likelihood of extreme rain events and summer droughts. Scientific uncertainty is not a justification for inaction.

Based on all the evidence before us, the only compelling argument for inaction is that as a society we do not believe that we have any responsibility for the well-being of future generations. But of course our actions suggest otherwise. It’s a basic human instinct to want to provide for our children and to offer them a better life.

Merchants of Doubt: How a Handful of Scientists Obscured the Truth on Issues from Tobacco Smoke to Climate Change
Buy Now

Dr. Weaver plainly identifies one reason for the relative lack so far of productive work toward emissions mitigation—a reason by now quite well documented by writers such as Naomi Oreskes (Merchants of Doubt ) and James Hoggan (Climate Coverup) :

Vested interests have spent an inordinate amount of time and money trying to convince the public that the science of global warming is either uncertain or that the whole issue is somehow a hoax. . . There is no question that doubt about climate science is on the rise because of a well-orchestrated campaign of misinformation.

These interests have done this for a variety of reasons, variously commercial or ideological. But they consistently play to what Dr. Weaver calls “a natural defence mechanism”: disturbed by the implications, or perhaps feeling helpless in the face of the problem, we prefer to wish the problem of climate change away, to “take solace” in carefully prepackaged beliefs “that somehow the science is uncertain, that corrupt scientists have conjured up a hoax.”

We’ve spent too much time living within a culture of global-warming fear and denial. It’s time to recognize global warming for what it is: the most self-empowering issue we will ever face. Every consumer of energy is part of the problem. Every person is therefore part of the solution. We are entering an age of creativity and innovation unlike any that modern society has experienced before. Rather than fearing this change, we need to embrace it. And the change starts in each and every one of our households. The time for us is now.

This hub is the latest in a series--read the previous Hub.

Other Hubs by Doc Snow