The Sherlock Holmes Museum in London is a privately held business located on Baker Street, where Arthur Conan Doyle placed his legendary fictional character. Despite the 110+ years of publicity abroad that Holmes is fictional, some readers believe that he actually lived. Rumors are that certain members of the Conan Doyle family were reportedly against the establishment of the museum in 1990, because they did not wish to reinforce myths of the character's actual existence and his fictional work between 1881 - 1904. 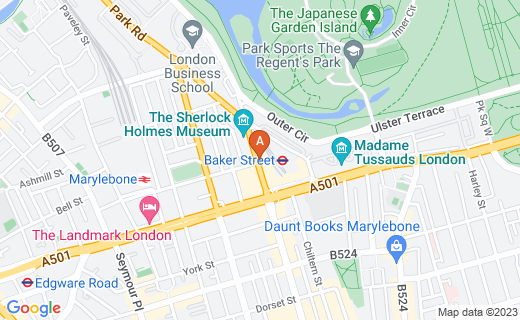 In a new twist of pastiche, a fresh mystery series written by Michael Robertson gives the Holmes address to an office in a building that covers the entire 200 block of Baker Street in London. This is also a fiction, but it serves the storyline well.

The block-long building is the Dorset Building. However, the actual Baker Street 200 block contains the Sherlock Holmes Museum, the Sherlock Holmes Memorabilia Company fronted by a Holmes statue, Oakleys Estate Agents, the London Beatles Store, The Volunteer pub, and other businesses. Dorset Square sits approxiamtely 500 feet west of this block and likely was the inspiration for the name of the building in this new Baker Street mystery series.

Reggie Heath is a corporate Queen's Counsel that has given up criminal law, although it tends to stalk him. He moved his law chambers away from others near the courts to take up the business address of 221b Baker Street. A clause he attempts to ignore in his lease is one that requires him to send a form letter in answer to the numerous letters received in his office for the addressee Sherlock Holmes.

Children to schizophrenics to senior citizens believe that Holmes is real and still living, even though this means he would be about 140 years old in the late 1990s of this story. Reggie assigns his brother Nigel to answer the letters, but Nigel becomes much to absorbed in reading them. Unable to keep hold of his solicitor's license, he loses himself in a set of three letters to Holmes. The first is from an 8-year-old girl 20 years ago, asking for help for her dad. The other two are forgeries in the current year, asloing for the first letter and its geological survey attachments to be returned.

Nigel suddenly leaves England and files to California in pursuit of the letter writers and their mysteries. Reggie finds a corpse in Nigel's office and flies after his brother. The ensuing hunt for truth and justice winds through the dumps of downtown LA, while subway excavations explode and additional people are murdered. Of course, the wrong people are arrested and Reggie and Nigel seem to cross each other's paths without meeting for several days. At the same time, police from USA and UK pursue the brothers.

The larger mystery of the book concerns geological surveys used for planning new subway tunnels in and around Los Angeles. Someone has produced a set of false plans that will lead the work crews to tunnel through explosive gasses while making the former property owners a lot of money in its sale to the subway company. A lot of conflict must be righted before Reggie can return his own problems in the UK - One is that his Lloyd's of London investment account is about to bottom out.

This book is not heavy reading, but the story is interesting and the characters are fun, Especially so when they are harassed by the paparazzi because both brothers dated a film star and their photos appear in the London tabloids nearly every day.

The Brothers of Baker Street

The Baker Street Jurors: A Baker Street Mystery (The Baker Street Letters)
Nigel is still receiving letters addressed to Sherlock Holmes at his law practice, 221B Baker Street. This time, one is about a famous cricketer who is being accused of murdering his wife. Will Nigel take the case?
Buy Now

The Brothers of Baker Street

In this book, the characters seem more well developed and familiar with one another. Reggie returns home to find himself financially challenged. He reduces his staff to one very good receptionist-secretary that he can trust, and he takes up criminal law once again.

The Holmes letters are packed off to Nigel, who has stayed in Los Angeles with the woman that wrote to Holmes when she was 8. He flies back to London, though, when another three letters present trouble. A descendant of James Moriarity believes that not only is Reggie actually Sherlock, but also the murderer of James back in the 1880s. Thus, Reggie must be about 140 year sold or so in 1997.

The mystery in this book is buried in business blackmail against the celebrated Black Cabs of London, their interesting School of Knowledge, and their drivers. Billed as the safest transport anywhere, the Black Cabs have been the locations of a staged series of murders. In addition, the characters struggle with the rather new technologies of GPS, cell phones, the Internet, and surveillance cameras. The story is fun as well as murderous.

The London tabloids are more active than ever with photos of Reggie with each mistake he makes with his criminal law practice and his efforts in regaining the good graces of film star Laura Rankin. However, she is effective and insightful enough in helping him in his practice that she could become a private investigator. She plays a type of Paul Drake to his accident prone Perry Mason. However, even though trouble pastes itself to Reggie each morning, he is as determined, upright, and justice demanding as both Perry Mason and Sherlock Holmes.